"Socrates and the Fat Rabbis"...new book on the Talmud and Plato 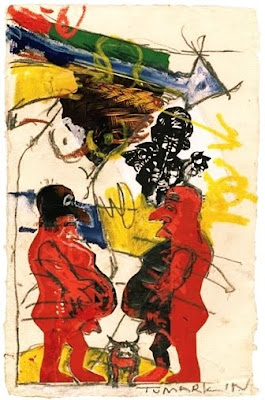 The University of Chicago Press...

What kind of literature is the Talmud? To answer this question, Daniel Boyarin looks to an unlikely source: the dialogues of Plato. In these ancient texts he finds similarities, both in their unique combination of various genres and topics and in their dialogic structure. But Boyarin goes beyond the typological parallelism between the texts, arguing also for a cultural relationship.

In Socrates and the Fat Rabbis, Boyarin suggests that these dialogues are not dialogic at all. Using Michael Bakhtin’s notion of represented dialogue and real dialogism, Boyarin demonstrates, through multiple close readings, that the give-and-take in these texts is actually monologic in spirit. At the same time, he shows that there are other elements that manifest genuine dialogicality. Boyarin ultimately singles out Menippean satire as the most important genre with which to understand both the Talmud and Plato, pointing out their seriocomic peculiarity.

An innovative contribution to rabbinic studies, Socrates and the Fat Rabbis makes a major contribution to scholarship on the discursive and cultural practices of the ancient Mediterranean.

The Book of Doctrines and Opinions: notes on Jewish theology and spirituality...

I just received my desk copy of Daniel Boyarin’s new book Socrates and the Fat Rabbis (University of Chicago), I have not read it yet. The book is quite dense and intricate at points so I just did a short first reading, skimming it at points and will read it in detail this week.

The major fact used by the book is that the aggadah in the Bavli was influenced by Roman Satire especially Lucian with his Menippean satire.

1] I wonder about the upcoming reception of the book. There has been a strong visceral reaction against situating the Talmud within Roman satire. A.A. Halevi, Sha’arei ha-Aggadah (1963) gave parallels between aggadah and Roman satires, but almost no one really picked it up. Already the Soncino Talmud had footnotes to the sources of sugyot in Roman satire, but who quotes those footnotes? In the nineteenth and early twentieth century, many majored in classics and readily saw the parallels. Is the reluctance because those who study Talmud, even in liberal seminaries, have a theological need to make the Talmud unique?

2] Boyarin discusses those who distance themselves from the exaggerated aggadah by distinguishing between halakhah and aggadah, and he discusses those who want to show the relationship of the two realms of halkhah and aggadah. He mentions the folklorists who remove the stories from their halakhic realm altogether.But he concludes that there are two types of aggadah, the gentle rational aggadah of the Halakhic realm and the wild aggadah. Boyarin references the distinction to Krokhmal. (I heard similar distinction from Rav Soloveitchik – that we should use the aggadah of the halakhic realm and not any and all texts of aggadah)

3] But Boyarin’s point is that the Talmudic debates are really monovocal, unlike the dialogues of the Platonic dialogues. (Similar ideas were already stated by Louis Jacobs in his Talmudic Argument.) Boyarin uses Bakhtin’s theories of dialogue and heteroglossia to claim that the halakhah does not consist of debates but is a single voice. But the halakhah together with the agadah, the narratives, and roman satire Aggadah create a rich sense of dialogue in the Talmud in which the aggadah undercuts and reverses the halakhah yet the halakhah retains its supremacy. (I had similar ideas back in 1988 using Bakhtiin and have notes to myself in a jot pad – my focus was distinguishing between the monovocal sugya compared to heteroglossia created by the commentaries- I must find the jot pad in the basement.).

4] Since anyone who has read classics has seen this parallel to Roman materials – what were the first reactions? R. Shmuel David Luzzato wrote that the Talmud is a conversation and that we can reject parts. Krokhmal said “dor dor vedorshav” this was the way the Jewish idea was expressed in that era. They were ahistoric and had roman satire- now we are rational and study history. For Geiger and most critics of the Talmud, it is another reason to reject the entire Talmudic enterprise. Maharetz Hayetz offers apologetic that they are didactic and do not conflict our modern sense; there is no historic difference from today. Many of them were simply to awaken and arouse the students.RSH Hirsch said aggadot have no tradition and we have to use reason to pick out the real ones. Even Loius Ginzberg claimed to have an intuitive sense of which aggadot are truly rabbinic.

Boyarin claims these ribald carnival aggadot are essential parts for understanding the Talmudic literary structure. This puts him in the same camp as the Maharal, Vilna Gaon and Rav Nahman of Breslov.

Back when I was in graduate school, I was studying Neoplatonism as a background for mysticism, but at the time postmodern deconstructionism was the rage. My professor trained in classics just shrugged off the new movement saying it was the return of the Sophists who were rejecting our beloved Plato. In the last 15 years, French philosophers- such as Alain Badiou have rejected post-modernist denial of truth by a return to weak knowledge; they return to Plato but argue that he had sympathy for the sophist projects (and mystery cults). Plato, and rationality in general, now has irrationality, obsessions, puzzles, and idiosyncrasies. Boyarin has read many of these works and presents the ideal of Greek philosophy and Talmudism as mediated in the complexity of the real world by satire (and rhetoric).

The setting for Boyarin’s book is a freshman core curriculum course in rhetoric for 600 students, in which the reading list includes among others Plato, Gorgias, Lucian, Thucydides, and Talmud. The book reads like the literary criticism of mid-twentieth century Columbia University- Van Doran, Barzun, Trilling- great ideas, illuminating fragments of other people’s scholarship, awakening the students to the life of the mind, but not worrying about the philologists.

My interest is what it contributes to Jewish thought- I will leave comments on the rest of the book to classicists and Talmudists. Only 3 out of 8 chapters are on Talmud.

What is a Platonic dialogue? Boyarin follows the Platonic scholarship of John Salllis (1996) who accepts the arguments of Plato’s critics’ and those who see him as more rhetoric than dialectic. Boyarin wants to open a humanistic question that is asked of Plato but rather in Jewish studies– what is Talmud? His starting point is David Kraemer work’s on the Bavli as literature, which he sees as asking some of the right questions and Boyarin will give more complex answers.

He situates the entire rabbinic project in the broad Roman cultural world. Somewhat similar to the way that in the current era of globalization the entire world knows coca cola, the Lexus, McDonalds, American TV, and American Pop music. Boyarin has little interest in creating a thick description of the cultural world and he has no analysis of the local knowledge or micro-histories. (Ignore his preface to the book- In the 1990’s when he was claiming to be a post-modern in his introductions, he was still using Dilthy and classic German cultural approaches. Now, he once again makes self-identifying claims based on what he is currently reading but having little bearing on what he is doing.)

He built up a presentation through other classical works about the role of serious vs satire, farce, and child’s play and applies them to the Talmud. Chapter six applies all categories as a sustained playing with Rabbi Meir. He cites an Ohr Sameah web posting to show how a “non scholarly to a fault source” uses the Roman material as a form of piety. Boyarin’s own presentations plays with satire, rhetoric, and the serious; many examples are left as metonymy or emblemic without a full presentation.

One of his best insights of the book for Jewish thought is his reading of Why did they not listen to Rabbi Meir since he can make the pure impure and the impure pure? Answer- like a sophist he was not connected to truth and therefore gets an ambiguous presentation..

Maharal and Rav Zadok answer that he was above the single perspective of ordinary materiality, the former emphasized his lack of materiality and the latter his mystical perspective. And they both have expositions on why the rabbis are fat. As noted before, Boyarin will be useful for the Eastern European interest in wild midrashim- midrash peliah. In my slow production of Maharal articles, Boyarin will come in handy when I deal with emblem and grotesque in Maharal.

Boyarin never discusses the mythos-logos relationship. Plato reformulates the myths to teach logos once property understood. This would have made the book more relevant to later Jewish thinkers since philosophers, kabblaists, and modern rationalists all use this device to state the aggadah has a deeper meaning. In the interim, I recommend the recent French scholar Luc Brisson, Plato the Myth Maker

The book has lots of ideas but would be nicely complimented by someone to write a full volume on Roman satire and the Talmud in order to actually be able to evaluate the thesis properly. In Border Lines, Boyarin introduces rabbinic logos thinking and the idea of rabbinic bitheism and then we have Moshe Idel giving us 700 pages of Ben: Sonship in Jewish Mysticism. This large tome allows us to begin to see where it works and where it does not.

I would like a similar volume here. For example, in TB Berakhot where the market place is seen a place of courtesans- there is much material in Jmaes Davidson, Courtesans and Fishcakes: The Consuming Passions of Classical Athens (1999)to begin an analysis- but how does this relate to the Hesiod sounding “HKBH’s tears created Orion and the Pleiades and both of them to the Heikhalot material in the tractate.

Zen and the Art of Motorcycle Maintenance turned to Plato to show how rhetoric wins over dialectic, and people should turned to direct experience and the narrative of the daily life. Now that current authors mix all the Platonic category – Boyarin offers a way to look at the mixed bag of the Talmud as part of classics.

I did not think it will make it onto my reading list for this spring on contemporary Jewish thinkers of the last 15 years (I am sitting here with a pile of examination copies of things. Michael Fishbane will be on the list).

As a side point, Boyarin did not seem to know Jacob Bernays, the important Lucian scholar was Hakham Bernay’s son (RSR Hirsch’s teacher) and Freud’s brother-in-law, because if he did the loose editorial hand of the book would have somehow tied it in. 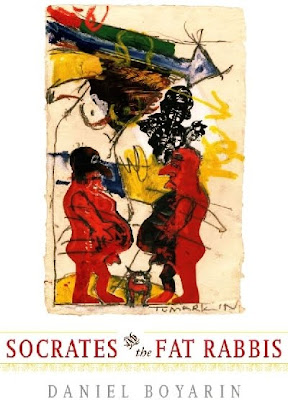 Socrates and the Fat Rabbis