From the "Philosophy Lovelorn" advisor 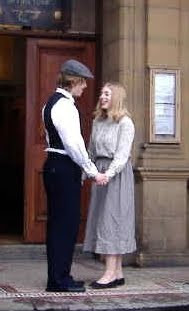 Some philosophical humor about romance.

"What Would Aristotle Do?"

The power of reason

Can Philosophy Make You Cold?

Natasha's boyfriend wants to use philosophy to overcome feelings for her.
Question:

I am a Haitian girl (21 years old) dating a white guy (20 years old). We have been dating for 2 years and three months. When we first met it was like fireworks. Once it sparked, nothing could stop us. We got along so smoothly; it was love. It wasn’t until my irrational behavior and jealousy that we started having arguments within the relationship, and the pain and ordeal worsened. He was always the rational guy, yet at times he still had moments of irrationality; he had intense anger and destructive personality issues. When I first met him he wanted to be a mechanical engineer and was studying at the same university as I was, but later realized that philosophy was his utmost passion. So he changed his major to philosophy. We had been through so much to the point of self-harm especially for him; we defied our parents and moved in together; we have been through unimaginable hardship just to stay together. That being said, we have had many breakups as well, but always ended back together. He recently figured out through philosophy that he is getting colder not because he lost feelings but he saw the truth behind emotions; he even began to manipulate it so that he doesn’t have to feel depressed anymore or feel upset about anything, either if it’s our relationship problem or his parents. He even used it to control his anger and many other personal issues. Of course at times he can slip but he believes it takes time to improve his mental control. He feels that he is getting colder and is too aware of his surrounding now; life to him is almost a game. He realized his goal in life is to become a great philosopher traveling the world to learn and teach. He can’t even bear to have kids or pets; he doesn’t want to bring a life into this world if he can’t guarantee its happiness. He doesn’t know if I’m what he sees in his future anymore; all he sees is philosophy. He believes we fight way too much; our beliefs and values clash. But at the same time he loves me so much it hurts and he can’t leave me. Our relationship has gotten much better; we are more mature now. But he is still so unclear about what he wants in the future. He feels as if he has given me all he can in this relationship and there’s nothing left to give. For me I want kids and a stable married life, but I love him so much I can’t let go. I am even willing to give up my values for him so that we can stay together, but he doesn’t like that idea and believes we are not suitable because we don’t have the same interests anymore. He believes in order for him to progress as a person and as a philosopher he must leave me eventually, and feels that I deserve a life with a less complicated person where marriage and kids is normal. He wants to be alone and discover himself as a person and as a philosopher. But at the same time he feels his attachment to me is making him unable to leave but he thinks he can slowly overcome that with philosophy and hence this is why he said he will get colder to the point that he can’t feel but only act, because life is a game to him. Emotions cloud people’s judgments; if they are eliminated, it allows people to act upon what they want rather than how they feel. Yet he can’t stop how he feels about me and so he says he will stay until the feelings go away, whenever that may be. My question is what should I do? Leave or stay? I love him so much.

You say that your boyfriend believes that he can eventually (“slowly”) overcome his attachment for you through philosophy. However, what seems indicated here is a philosophical perspective on what philosophy can and cannot rationally be used for. This is by no means a substitute for therapy. You indicate that your boyfriend has “destructive personality issues,” that he has engaged in “self-harm,” and that he has been depressed. This suggests serious underlying psychological issues for which he should contact a mental health specialist.

Based on what you say, it appears that your boyfriend has discovered the potential of philosophical thinking to expose irrational ideas and to overcome irrational emotions and behavior. However, he seems to want to use philosophy to overcome all emotions, even healthy ones. This is an extreme that no philosopher (or psychologist) could competently recommend.

Here, the admonition of Aristotle to avoid extremes is relevant. For example, excessive worrying is one extreme, but apathy and indifference is another extreme. Likewise, attempting to use reason to stifle emotions entirely is an extreme that Aristotle would caution against. Aristotle said that human beings are rational animals. This means that by their nature they cannot be purely rational. Passionate caring for another person is not unhealthy unless it becomes obsessive and interferes with other aspects of rational living. So there is no point to attempting to use philosophy to quash passionate caring as though it were some sort of disease.

Nor should one’s emotional life get in the way of one’s pursuit of philosophy. Having interpersonal relationships need not take too much time from philosophical reflection. This is another extreme to avoid. As the famous British Eighteenth Century philosopher, David Hume, pointed out, the nature of human beings suits them for a “mixed kind of life” in which we cultivate our reason, however not to the exclusion of social and practical aspects of life. Too much attention to one nature at the expense of another is destructive. Hume remarks, “It seems, then, that nature has pointed out a mixed kind of life as most suitable to the human race, and secretly admonished them to allow none of these biases to draw too much, so as to incapacitate them from other occupations and entertainments.”

“Man,” Hume stated, “is a sociable, no less than a reasonable being.” Thus it is not within the nature of human nature to try to devote oneself 100% to the cultivation of one’s mind through philosophy. You stated that your boyfriend wants to be alone in order to discover himself as a person but, according to Hume, such self-discovery may be impossible. If Hume is right, an essential part of one’s nature can never be discovered in a social vacuum.

It is also unreasonable to demand perfection where it cannot be had in this imperfect world. Thus the fear of bringing children into the world without being able to “guarantee its happiness” is based on an irrational demand about the world, which can offer no guarantees. Consistently applied, a philosophy of demanding guarantees before undertaking something would only lead to inactivity and stagnation.

As for your willingness to give up your values in order to hold on to your boyfriend, Jean Paul Sartre admonished, when people attempt to give up their personal freedom and responsibility by conforming to the will of others, they lose themselves. On this view, it is only by living according to your own moral and social lights that you will find fulfillment.