The trickle down effect for a street vendor of used books 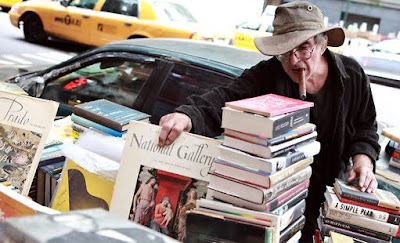 "In Bookstore’s End, No Joy for Sidewalk Seller"

The New York Times
Charles Mysak does not see himself as an island, entire of himself. He is a part of this city, a part of the main.

And as he sets up his makeshift used-book shop along a patch of Columbus Avenue each day, he remembers the words of John Donne: “Any man’s death diminishes me, because I am involved in mankind, and therefore never send to know for whom the bell tolls; it tolls for thee.”

Nearly four centuries ago, Donne suggested that we each die a little when another human being goes. For Mr. Mysak, when another bookseller closes shop, it means that he, too, is a little closer to a literary death.

So he takes little pride in the fact that at the end of January, his little table stacked high with used books will have outlived the giant Barnes & Noble less than two blocks south, near Lincoln Center. For him, it is just another sign of decay.

“Here’s the terrible aspect of all this,” Mr. Mysak said one recent afternoon, pointing to a shuttered bar just up the avenue. “If a saloon and bookstore can’t make it on the Upper West Side, what better evidence do you need than that of the decline of artistic and free thought? If this is happening here, what must you see in the hinterlands of America?”

For more than a decade, beginning after Barnes & Noble opened its doors, Mr. Mysak has sold from his collection of hundreds of used books. Instead of shelves, he uses a rickety old folding table, which he sets up south of 68th Street, along with some plastic crates and well-worn cardboard boxes. The prices are penciled inside the book covers, generally no more than $5, save for some classic out-of-print hardbacks.

Business is good enough to keep him coming back each morning around 7 to unload his car, a dark-green Honda Civic (held together by duct tape in a few spots), where he keeps his entire inventory. But for almost as long as he has been in business, he said, his take-home earnings have gotten smaller and smaller. These days, he is satisfied if he grosses more than $100 in a 12-hour day.

“Is it a living?” he asks, his mischievous grin spreading across his lips. “Don’t ask my wife that question.”

It almost does not seem to matter to Mr. Mysak, 59, of Wayne, N.J., who can be evangelical in his belief that “in this three-by-eight stand is the answer to every human question.”

In some ways, Mr. Mysak is an unlikely bookish hero — he was disbarred as a lawyer in New Jersey and was convicted of pilfering money from clients. But as he peers through his Coke-bottle glasses and alternately puffs and chomps on a stumpy cigar, he speaks in paragraphs and elliptical sentences that betray his voracious reading habits. (He returns to his favorites — H. L. Mencken and Raymond Chandler — several times each year.)

“There are days when 15 or 20 people pass by and might not even notice I’m here,” he said, as several pedestrians seemed to do just that. “A decade ago, if you saw someone covering their ear and talking to themselves, you would have thought they were just nuts. Today that’s the norm. It’s as if they are totally consumed by their own world and have no room for the outside. It is complete immersion in self to the exclusion of all else. That has to have an impact on the rest of our lives.”

So he does not see the downfall of Barnes & Noble — where he occasionally goes to warm up and use the restroom — or the decline of his own sales as some kind of business failing. It is, he laments, a reflection of society. The nearby Apple store, he notes, has no problem attracting customers, who walk out with slick white bags holding small devices with large price tags.

“People walk out of there as if they are in ecstasy,” he said.

He points to a row of books that include editions by Aldous Huxley, E. B. White and Ansel Adams. A decade ago, he said, those books would not have stayed on his table for more than a few hours. Now, they have been there for more than a month. “Largely ignored,” he said sadly.

“It is apparent that we have a real serious issue, that the life of the mind has been in decline for some time now,” he said. He dismissed concerns about health care as he began smoking another cigar. “Ignorance and indolence is the primary problem. If you take care of the mind, everything else follows.”
Posted by Mercury at 6:51 PM