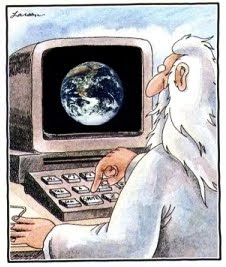 Two ways to look at this: Genuine criticism or a good way to generate interest in S. Hawking's new book. Ah, economics, philosophy, and science.

A rabbi [Lord Sacks] and a priest [Rev. Robert Barron] walk into a bar and offer criticism on Hawking's perspective...

Chicago Trubune
So another prominent British academic has weighed in on the God question. Stephen Hawking, probably the best-known scientist in the world, has said, in a book to be published a week before the Pope’s visit to Britain, that the universe required no Creator.

I confess that something in me tightens whenever I hear a scientist pontificating on issues that belong to the arena of philosophy or metaphysics. I will gladly listen to Stephen Hawking when he holds forth on matters of theoretical physics, but he’s as qualified to talk about philosophical and religious issues as any college freshman.

There is a qualitative difference between the sciences, which speak of objects, forces, and phenomena within the observable universe, and philosophy or religion which speak of ultimate origins and final purposes. Science, as such, simply cannot adjudicate questions that lie outside of its proper purview—and this is precisely why scientists tend to make lots of silly statements when they attempt to philosophize.

Here’s an example from Hawking’s latest book: “Because there is a law such as gravity, the Universe can and will create itself from nothing.”

Well, first of all, which is it: nothing or the law of gravity? There’s quite a substantial difference between the two. If Hawking is saying that the universe, which is marked in every nook and cranny by stunning and mathematically describable intellegibility, simply came forth from Nothing, then I just throw up my hands.

The classical philosophical tradition gives us an adage that is still hard to improve upon: ex nihilo nihil fit (from nothing comes nothing). Any teacher worth his salt would take a student to task if, in trying to explain why and how a given phenomenon occurred, the student were to say, “well, it just spontaneously happened.” Yet we are expected to be satisfied with precisely that explanation when it comes to the most pressing and fascinating question of all: why is there something rather than nothing?

In my dialogues with atheists, I often come up against this total non-explanation, and I can only smile ruefully. Apparently, the affirmation of God involves far too great a leap of faith, yet the assertion that the universe just popped into being is rationally compelling!

So suppose we say (to return to Hawking’s rather incoherent statement) that gravity is the ultimate cause of the universe. This would mean that a force within nature is the source of the being of the world.

To be sure, this sort of claim has a long pedigree, stretching back at least to the pre-Socratics, but it remains highly problematic. The question “why is there something rather than nothing?”is not searching after a thing within the universe, but rather the being of the universe. It is wondering why (to use the technical term) contingent things exist, that is to say, things that do not contain within themselves the reason for their own being.

You and I are contingent in the measure that we had parents, that we eat and drink, and that we breathe. In a word, we don’t explain ourselves. Now if we want to understand why we exist, we cannot go on endlessly appealing to other contingent things. We must come finally to some reality which exists through the power of its own essence, some power whose very nature it is to be.

But that whose very nature it is to be cannot, in any sense, be limited or imperfect in being, and this is precisely why Catholic philosophy has identified this non-contingent ground of contingency, this ultimate explanation of the being of the universe, as “God.”

To claim that something as finite and variable as the force of gravity is this ultimate explaining value is simply ludicrous. However all-embracing or powerful it is, gravity is still a worldly nature, something within the contingent cosmos.

There is a line from one of the articles describing Hawking’s book that I found, actually, quite helpful and illuminating. The author said, “in his new book, The Grand Design…Hawking sets out a comprehensive thesis that the scientific framework leaves no room for a deity.”

Quite right. Since the true God is not a being alongside other beings, not one thing in the universe among many, he is not circumscribable within a scientific frame of understanding. He should not, therefore, even in principle, be either affirmed or denied from a purely scientific perspective.

There is, of course, rampant today a “scientism” which would reduce all legitimate knowing to the scientific mode of knowing. You can find this form of dogmatism in the writings of all of the prominent “new” atheists: Christopher Hitchens, Daniel Dennett, Richard Dawkins, etc.

I must confess that I’m disappointed that Stephen Hawking appears to have joined their company.

guardian.co.uk
The chief rabbi, Lord Sacks, hit back at Stephen Hawking after the astrophysicist said God did not create the universe.

In his new book, The Grand Design, published next week, Hawking concludes that science excludes the possibility of a deity and that it is unnecessary to "invoke God to light the blue touch paper and set the universe going".

But his findings were described by Sacks as an "elementary fallacy" of logic.

Writing in the Times, the chief rabbi said: "There is a difference between science and religion. Science is about explanation. Religion is about interpretation. The Bible simply isn't interested in how the universe came into being."

Sacks also said the mutual hostility between religion and science was one of "the curses of our age" and warned it would be equally damaging to both.

In an earlier book, A Brief History of Time, Hawking was apparently more open to the idea of God, suggesting that a scientific understanding of the universe was not incompatible with a creator. "If we discover a complete theory … it would be the ultimate triumph of human reason – for then we should know the mind of God," he wrote.


Hawking has inside information about the universe

S. Hawking's new book...a review by Michael Moorcock
Posted by Mercury at 6:19 AM