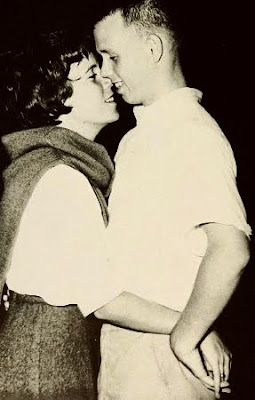 The origins of the term platonic friendship.

Slate
There's a "strictly platonic" category on Craigslist filled with personal ads that belong under a racier section heading ("I'm very willing and needy in my sexuality"). Fewer postings request the nonsexual companionship that most people associate with the term platonic friendship (These are less fun to read: "anyone up for a movie?"). I've been using the modifier platonic a lot lately—ever since I started researching a series on male-female friendship—always in the nonsexual sense. And I assume that most people know exactly what I mean. But how did Plato, a classical philosopher, come to be associated with nonphysical attachment?

The Florentine scholar Marsilio Ficino coined the term amor platonicus (Latin for "platonic love") in the 15th century. He had in mind Plato's Symposium, in which Socrates describes a possible ascent from base desire to high-minded contemplation—a "ladder" with love for a beautiful person at the bottom, and love of Beauty itself at the top. (Step by step: Love of a beautiful body, love for all beautiful bodies, love for the beauty of laws, love for the beauty of knowledge, and the love of Beauty itself.) Ficino Christianized the concept, interpreting the final Beauty as a reference to God. He further asserted that true lovers are drawn to each other's divine souls: "[T]he passion of a lover is not quenched by the mere touch or sight of a body," he wrote, "for it does not desire this or that body, but desires the splendor of the divine light shining through bodies, and is amazed and awed by it."

The Symposium concerns relationships between men, not between men and women—Socrates' "beautiful body" belongs to a young boy. Although Ficino condemned homosexuality as unnatural, he also thought that chaste male companions were best-suited for trips up the heavenly ladder. But as Ficino's description of Platonic love circulated around Europe, women stepped into the role of the beloved who incites spiritual desire. Neoplatonic thought also fused somewhat with an old courtly tradition in which women occupy an elevated position and become objects of male worship. This heterosexual platonic love wasn't "friendship," but a more romantic (though still not corporeal) bond that emphasized the benefits of chastity over erotic passion. The platonic male lover venerates a woman's soul rather than her body.

By the time the phrase Platonic love entered written English in the 1630s, Neoplatonism was a fad among English royals and their circle. In 1634, the writer James Howell noted that "the Court affords little News at present, but that there is a love call'd Platonick Love, which much sways there of late; it is a Love abstracted from all corporeal gross impressions and sensual Appetite, but consists in Contemplations and Ideas of Mind." William Davenant's 1636 play, The Platonick Lovers, satirizes the concept by making it seem pretentious. He contrasts Theander and Eurithea's lofty intellectual connection with Phylomont and Ariola's more ordinary physical attachment. Toward the end of the play, Theander takes medicine that "cures" him of his chastity; he and Eurithea commence a more "natural" relationship.

Eventually, the religious aspects of platonic friendship got watered down, and spiritual came to mean not physical. Certainly by the mid-18th century platonic friendship and platonic love were commonly used to signify an intense but sexless relationship, not a Godly one. In his 1742 novel Joseph Andrews, Henry Fielding wrote of his two main characters, "If they found themselves to be really Brother and Sister, they vowed a perpetual Celibacy, and to live together all their days, and indulge a Platonick Friendship for each other."

In this new phase, a friendship could be described as platonic even in the face of mutual desire. It was the infeasibilty of the romance, for one reason or another, that defined the status. In his 1846 Biographical History of Philosophy, for example, George Henry Lewes wrote, "This is the celebrated Platonic Love, which, from having originally meant a communion of two souls, and that in a rigidly dialectical sense, has been degraded to the expression of maudlin sentiment between the sexes. Platonic love meant ideal sympathy; it now means the love of a sentimental young gentleman for a woman he cannot or will not marry."

It's now common to hear platonic used as a modifier that means no sex and no interest in sex—not something spiritual, not a courtship, and not a frustrated romance. But it's also common to hear Lewes-style dismissiveness attached to the phrase, with the implication that platonic friendship is nothing of the kind. In 2003, the Word Detective blog fielded a question about the origins of the phrase. It turned up in English around 1630 was the answer, "and various people have been claiming to be involved in 'just platonic' relationships ever since. They are, of course, almost always lying."
Posted by Mercury at 8:12 AM