99 lashes for Sakineh Mohammadi Ashtiani prior to execution 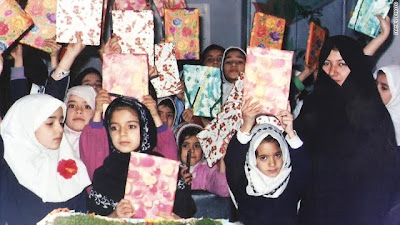 CNN
An Iranian woman who'd already been condemned to death faces another sentence of 99 lashes because of a case of mistaken identity in a photograph, according to foes of the execution.

Iranian authorities imposed the sentence after they saw the photo of a woman without a head scarf in a newspaper, the International Committee Against Stoning, a human rights group, said Friday.

In an apology, The Times of London, which ran the photo on its front page on August 28, said the woman was wrongly identified as Sakineh Mohammadi Ashtiani, who had previously been sentenced to death by stoning for adultery.

The Times said the photo actually is of Susan Hejrat, a political activist living in Sweden.

Iranian law requies all women, regardless of their faith, to wear garments that cover their hair and bodies.

According to the Times, one of Ashtiani's former lawyers, Mohammed Mostafaei, gave the paper the photo.

Mostafaei told CNN Saturday that he still thinks the photo may be of his former client.

The Times said Mostafei told it that Ashtiani's son, Sajjad, 22, had e-mailed him two photographs three months ago and told him both were of his mother.

"One was the widely used picture of Ms. Ashtiani with her face obscured by a chador [cloak], and the other was the one used by The Times ... That showed the full face of a woman," The Times said in a statement Friday.

Sajjad Ghaderzadeh wrote in an open letter that another lawyer sent the paper an authentic photo of his mother, but that it did not appear in the Times article. The letter was circulated by the International Committee Against Stoning on Friday.

"We do not know how that picture was originally obtained, nor to whom the picture belongs," Ghaderzadeh said in the letter.

"My mother has been called in to see the judge in charge of prison misdemeanors and he has sentenced our helpless mother to 99 lashes on false charges of spreading corruption and indecency by disseminating this picture of a woman presumed to be her [Sakineh] without hijab," he wrote.

A phone call to the Ministry of Foreign Affairs in Tehran early Sunday morning was not answered.

The Committee Against Stoning said Friday that "it is Mr. Mostafaei's responsibility to provide an explanation as to why he has disseminated [a] counterfeit photo and information regarding Sakineh's case; his action has only led to increased pressure on Sakineh and her family."

"We strongly condemn this barbaric new sentence of 99 lashes imposed by the Islamic Republic against Sakineh and we demand that this sentence be abandoned immediately," said the committee.

Mostafei told CNN that Ghaderzadeh three months ago gave him two photos -- one of Ashtiani wearing a hijab (covering) and one without it, Mostafei said.

The lawyer said he immediately released the photo of Ashtiani wearing the chador and sent the Times the photo of her without the hijab more recently.

Asked about whether the photo printed by the Times is of Ashtiani, Mostafei said, "In my opinion it is Ms. Ashtiani. It was given to me by her own son. If it is not indeed her, it looked just like her. She was wearing religious clothes in the photo, she had the same face, same everything."

Ashtiani was sentenced to death by stoning after she was convicted of adultery. Iranian judicial authorities say a final verdict in her case has not yet been made, ISNA news agency reported recently. In July, Iran's judiciary said the case was under review.

Ashtiani, who is being held in Tabriz, Iran, no longer has visitation rights, the family told CNN.

The Committee Against Stoning has said that Iran announced she will not be executed during the Muslim holy month of Ramadan, which ends around September 9. Iran's judiciary could reinstate her sentence of death by stoning, execute her by other means, or possibly grant her a reprieve, according to human rights groups.

Iran's Judiciary High Council of Human Rights indicated that evidence shows the allegations against Ashtiani "have been proved right" and that Iran's judiciary operates independently as other justice systems do, the semi-official Iranian Student's News Agency reported.


Iranian woman coerced to confess?
Posted by Mercury at 6:21 AM