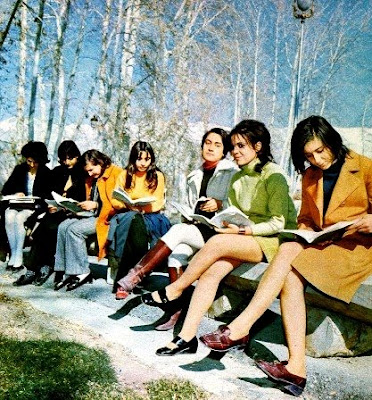 Iran in the 1970s.
Old men like Ayatollah Sayyed Ali Khamenei are stuck in tired, inflexible dogma of control, manipulation. Why such global outrage over the sentence of execution of Sakineh Mohammadi Ashtiani? Is it because she is female, attractive, disapproval of an act of ancient barbarism?

Iran suspended the stoning sentence for a woman convicted of adultery amid mounting international pressure, including the European Parliament's 658-1 resolution against such punishment.

European leaders and Western activists had sought to prevent the execution of Sakineh Mohammadi Ashtiani, convicted of adultery, in a mounting war of words with Iranian hard-liners – including one who called French first lady Carla Bruni-Sarkozy a “prostitute” who deserved to be killed after she advocated on the woman's behalf.

“The verdict regarding the extramarital affairs has stopped and it’s being reviewed,” Foreign Ministry spokesman Ramin Mehmanparast told Iran’s state-run PressTV. He said a separate murder charge was “being investigated for the final verdict to be issued.”

Subsequent PressTV newscasts quoted Mr. Memanparast denying reports that Ms. Ashtiani had received 99 lashes as “absolutely wrong” and conjured up by the Western media “to give it this emotional sense, to stir up people’s emotions.”

“It means that international pressure has begun to tell, and finally they have begun to realize the negative fallout from this is much, much greater than efforts to prove the authenticity of Islamic justice,” says Anoushiravan Ehteshami, an Iran specialist at Durham University in England.

The European Parliament passed a resolution 658-1 Wednesday saying that a stoning punishment “can never be justified or accepted.” On Tuesday, European Commission President Jose Manuel Barroso said the sentence was “barbaric beyond words,” with “no justification under any moral or religious code.”

French Foreign Minister Bernard Kouchner said he was willing go to Tehran if it would prevent the stoning. Brazil – one of the nations closest to Iran, which brokered a nuclear deal with Iran and Turkey last May – has offered Ms. Ashtiani asylum. The Vatican has also weighed in on what it criticized as the “brutal” punishment.

As outrage has grown, so, too, has Iran’s official determination not to buckle, though some Iranian media have indicated the stoning sentence might be changed to hanging, or to a lesser sentence. One pillar of Iran’s 1979 Islamic revolution was “independence” from the political and cultural influence of outside powers – especially the West.

“The most important lesson for them is that there are certain global norms now that you break at considerable expense to yourself,” says Professor Ehteshami. “And for all the ups and downs we’ve had over this case … and the government insistence that it would not allow any interference, that it would not yield to international pressure – well, we’ve seen the exact opposite [and] that ultimately it has not been able to cocoon itself.”

Pressure has been growing on Iran on a number of levels. Besides the Ashtiani stoning case, Iran’s controversial nuclear program led to the imposition of a fourth round of UN Security Council sanctions last June. Washington and the EU have followed with yet tougher measures, which can punish Iran’s trading partners.

On Wednesday, South Korea announced that it, too, would put a “heavy penalty” on the Seoul branch of Bank Mellat, which is listed in UN sanctions documents as facilitating large transactions for Iran’s nuclear, missile and defense programs. Another 102 Iranian entities in South Korea would also be affected, all transactions with Iran to be scrutinized, and new investment in Iran’s energy sector restricted.

Even Fidel Castro – a fellow revolutionary whose anti-American and anti-imperial views should make him an ally of Iran – recently cautioned President Ahmadinejad against rhetoric that could lead to war with the West, expressing regret over his own actions in the 1962 Cuban missile crisis that nearly led to nuclear war between the US and the Soviet Union.

“The enemies of the nation seek to frustrate the people with economic pressures so the people blame the government for them and ties are cut between the government and the people,” state media quoted Ayatollah Khamenei saying, according to a translation by Agence-France Presse.

“But the nation and officials will undoubtedly circumvent the sanctions and render them ineffective just as [they have] in the past three decades,” Khamenei said in a speech.

Foreign Ministry spokesman Mehmanparast blamed the US for raising the temperature over the stoning case. His comments echoed steady accusations from Tehran’s arch-conservative leaders that the US, Britain, and Israel were behind the violent protests last summer in the wake of President Mahmoud Ahmadinejad's reelection, which opposition leaders – and many Iranians – say was rigged.

“It looks like they are playing a political game,” said Mehmanparast.

But it was the chief of the hard-line Kayhan newspaper, Hossein Shariatmadari – the most powerful newspaper editor in Iran, and a representative of Khamenei – who turned the stoning sentence into a European cause.

After Mrs. Bruni-Sarkozy signed a petition with other celebrities calling for Ashtiani’s release, saying, “Everything within me refuses to accept this [sentence],” Kayhan called her an “Italian prostitute” who “has had illegitimate relationships with different people before and after marrying [French President Nicolas] Sarkozy.”

“Reviewing Carla Bruni’s records clearly shows why this immoral woman has supported an Iranian woman who has committed adultery, contributed to the murdering of her husband, and has been sentenced to death, and in fact she herself [Bruni] deserves death,” Kayhan continued, in a translation by AFP.

“They make these wild, wild inflammatory statements from time to time, and that is consistent and not new, when they lash out against a certain individual who may have been more vocal in the West,” says Ehteshami. “The concept in obviously case-relevant here.”