Roll over Verdi...Klingons are taking over the stage 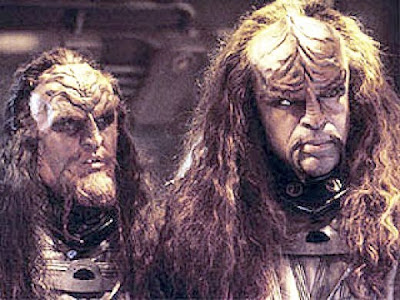 An opera in the Klingon language kicks off its three-day run in the Hague Friday.

SPACE.com
Die-hard "Star Trek" fans may want to dust off their Klingon dictionaries and take a transporter to Europe for the debut of the first opera ever to be completely sung in the invented science fiction language.

The opera, called "u," kicks off a three-day run at the Zeebelt Theater today in The Hague, Netherlands. The title "u" is the Klingon word for "universe" or "universal."

Tickets for the performances were still available as of Friday morning, according to Reuters.

Klingon, which is spoken by members of the fictional "Star Trek" warrior race of the same name, has evolved into a significant pop culture phenomenon since the American science fiction TV series first hit the airwaves in the late 1960s.

Fans worldwide adopted the alien dialect and made it one of the most popular constructed languages, opera organizers said.

And, since opera occupies a large part of Klingon culture, the creation of such a show here on Earth seemed like a logical choice, opera organizers said.

In April, the show's producers sent a message out into the cosmos inviting the "real" Klingon community to attend the upcoming performances.

The invitation was sent by a radio telescope to the Klingon home star, Arcturus.

"The Klingon are known as passionate opera lovers but at the same time very little was known about Klingon opera here, so as far as I was concerned that was a very interesting challenge to try and make an authentic, or as authentic something out of that as possible," the show's creator Floris Schonfeld told Reuters Television.

The 90-minute production follows the journey of Kahless the Unforgettable. After being betrayed by his brother and bearing witness to his father's brutal death, Kahless faces his bitter enemy, the tyrant Molor.

Along the way, Kahless fights to regain his honor by traveling into the underworld, waging epic battles, and reuniting with his true love, Lukara.

The show was well-received after a preview was staged Thursday evening, as reported by Reuters.

"It was really well interpreted, the music was really good, and the performance of the actors were fantastic," Reuters quoted audience member Erwin Slegers as saying.
Posted by Mercury at 3:26 PM