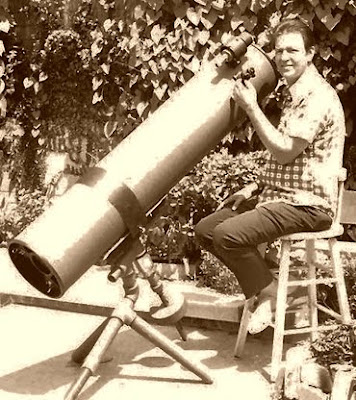 Alvin Lawson, seen with a telescope in the early 1970s, became convinced over the years that alleged UFO abductees actually were using memories of birth trauma to describe their encounters with extraterrestrials.

Over the years, the Cal State Long Beach professor became convinced that people actually were using memories of birth trauma to describe encounters with extraterrestrials.

Los Angeles Times
Alvin Lawson, an English professor at Cal State Long Beach who spent decades studying unidentified flying objects and questioning the beliefs of people who said they had been abducted, has died. He was 80.

Over the years, he developed "a personal kind of fascination" with UFOs, his daughter said.

Lawson taught a class on the subject at Cal State Long Beach, started a telephone hotline about UFOs and became convinced that people who said they had been abducted actually were using memories of their birth to describe encounters with extraterrestrials.

"Do I think there are unidentified flying objects, things that people can't explain what they are or why they're there? Yes," he told the St. Paul Pioneer Press in 1996. "Do I think little green men are inside abducting people? No."

Alvin Houston Lawson was born Oct. 11, 1929, in Fort Bragg, Calif. His father, Roscoe, was a school principal who became a district superintendent, and his mother, Katherine, was a teacher.

Lawson graduated with a bachelor's degree from UC Berkeley in 1952 and a master's in 1958 and a doctorate in 1967, both in English, from Stanford University. He served in the Army during the Korean War.

In 1953, Lawson married Barbara Slade. They met as students and fellow musicians at San Francisco State, which Lawson attended as an undergraduate before transferring to Berkeley. She played the clarinet and he played the trumpet in the school band, Lawson's daughter said.

Lawson joined the Cal State Long Beach faculty in 1962 and stayed through the mid-1990s, becoming an emeritus professor in 1990. He was "quite a hard-working instructor," especially when teaching his primary interests of Nathaniel Hawthorne, Emily Dickinson, short stories and children's literature, said Charles Pomeroy, a retired English professor who shared a campus office with Lawson for about 20 years.

Not everyone on the faculty understood how Emily Dickinson and "E.T." could interest the same professor.

"University life is very tolerant, but a lot of people had the sense it was a very unusual interest for him to have," Pomeroy said.

Lawson once told a Times reporter that his interest in UFOs began in the late 1940s when he first read of reported sightings. In the 1970s, he started the UFO Report Center of Orange County, which according to a 1992 Times article received about 400 calls in its first year.

With an Anaheim doctor, William C. McCall, Lawson used hypnosis on people who said they had been abducted. Lawson started becoming more skeptical of the accounts, and he and McCall decided to hypnotize people who made no claims about space aliens. They were asked to imagine being abducted so the accounts could be compared to reported abductions. Lawson was struck by the similarities.

"We had expected the people imagining the abductions would be giving us real predictable, stultified, cardboard encounters. But they made up incredible stuff," he told The Times. "It was just as rich, variable and interesting as the supposedly real abductions."

Lawson believed people could remember the trauma of their birth and the subjects kept using similar imagery and details.

"The research means that people who have reported being captured by the UFOs have had experiences as least as valid as dreams, deathbed visions and psychosis," he told Canada's Globe and Mail newspaper in 1985. "That is, they aren't lying but their experiences aren't real or anything like we've seen in the movies."

Lawson's views made him "a rebel" among people interested in UFOs, his daughter said.

"There is an underlying assumption in his work … to presume that anyone who sees or has seen an alien had a 'birth trauma,' " Robert D. Morningstar, editor of the newsletter and website UFO Digest, said in an e-mail to The Times. "He could say that all he wanted to, but how does he prove it?"

Lawson said of his critics in 1996: "True believers are mad at me. My ideas represent a threat to their belief systems. To them I'm like an atheist that shows up to a party given by Jerry Falwell."

In addition to his wife and daughter, Lawson is survived by a brother, Wilbur, of Fort Bragg; a sister, Beverly, of Rocklin, Calif.; and four grandchildren.
Posted by Mercury at 6:13 AM