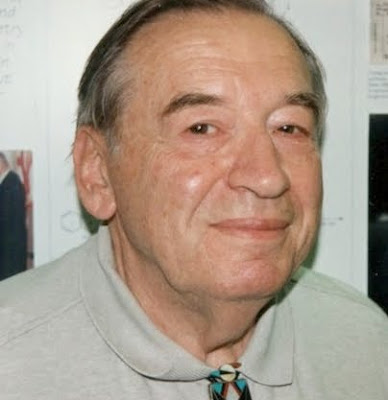 The New York Times
Jacob Bigeleisen, a chemist who worked on the development of the atomic bomb as part of the Manhattan Project and helped discover new ways of analyzing chemical reactions, died Aug. 7 in Arlington, Va. He was 91.

The cause was pulmonary disease, his son Ira said.

Dr. Bigeleisen (pronounced BEEG-a-lie-zen) was a founder of the field called isotope chemistry. Isotopes are versions of an element that have almost the same chemical properties but different atomic weights. Dr. Bigeleisen’s initial foray into the field was one of wartime need. In 1943, he began working at Columbia University as part of the Manhattan Project, seeking to develop a chemical process to separate uranium-235, the radioactive isotope needed to make an atomic bomb, from the more bountiful isotope uranium-238.

The approach Dr. Bigeleisen tried, using photochemistry, did not prove practical for producing large quantities of uranium-235 needed for the bombs. Ultimately, gaseous diffusion was used.

But the research, by Dr. Bigeleisen and Maria Goeppert-Mayer, who would later win a Nobel Prize in Physics, resulted in a simple theory for calculating the behavior of isotopes in gaseous reactions, which helped open the new field of isotope chemistry.

Their crucial insight was that the weight of the atoms affected the strength of atomic bonds in a molecule, and bonds to a light isotope were easier to break than bonds to a heavy isotope.

In 1949, Dr. Bigeleisen published a follow-up paper that described the effects of isotopes in speeding up or slowing down chemical reactions. Chemists now take advantage of this phenomenon by replacing atoms in molecules they are studying with heavier or lighter isotopes. From the changes in reaction rates, they can better understand the reaction process and identify the intermediate configurations the chemicals take on before the reaction is completed.

“It all goes back to Jake’s stuff,” said Nathan Lewis, a professor of chemistry at the California Institute of Technology. “It’s textbook things that are used all the time now.”

Jacob Bigeleisen was born in Paterson, N.J., on May 2, 1919. When he graduated from high school in 1935, at the peak of the Great Depression, his father wanted him to learn a trade. His mother insisted that he go to college.

A friend of his suggested that he study chemistry.

“His brother-in-law owned a small dye house,” Dr. Bigeleisen recalled in a talk in 1989. “Paterson was a textile town, and there were dye houses there. He told me that each dye house had a chemist and thus there might be some opportunities.”

He attended University College of New York University in the Bronx, graduating in 1939. “I found that there was a whole world that I never knew about, the excitement of doing research and discovering new knowledge,” Dr. Bigeleisen said in his 1989 talk. “I never did look for a job in a dye house.”

He obtained a master’s degree at Washington State University in 1941 and finished his doctorate at the University of California, Berkeley, in 1943, and then went to Columbia to work on the chemical separation of uranium.

After the end of World War II, he held research positions at Ohio State University and the University of Chicago before joining Brookhaven National Laboratory on Long Island in 1948.

He moved to the chemistry department at the University of Rochester in 1968 and to the State University at Stony Brook in 1978.

Dr. Bigeleisen was a member of the National Academy of Sciences and a fellow of the American Academy of Arts and Sciences.

In addition to his son Ira, Dr. Bigeleisen is survived by his wife of 65 years, Grace; two other sons, David, of San Francisco, and Paul, of Rochester; a sister, Shirley Gans of West Palm Beach, Fla.; and six grandchildren.

Isotopes were not the only field that caught Dr. Bigeleisen’s interest. When Brookhaven built a chemistry building in the 1960s, Dr. Bigeleisen, as chairman of the building committee, worked with the architect on designing an efficient laboratory, including the seating arrangement in the auditorium.

An obituary on Tuesday about the chemist Jacob Bigeleisen, who worked on the development of the atomic bomb, referred incorrectly to the method used by the United States during World War II to separate uranium-235 from uranium-238 for atomic bombs. It was gaseous diffusion; centrifuges were not used to separate the uranium.]
Posted by Mercury at 5:38 AM