Does recycling cause people to consume more? 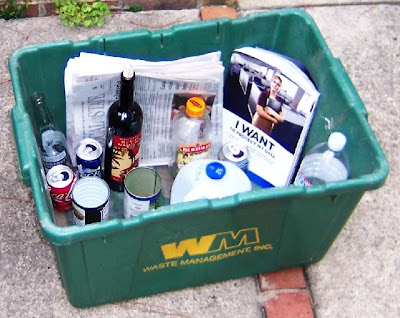 "Rewards for recycling may encourage people to create waste"

Plans have been dropped to penalise those with overstuffed bins, but the emphasis should be on unnecessary packaging.

guardian.co.uk
What is the best way to reduce the amount of waste we send to landfills: the carrot or the stick? The Labour government considered both, taking some heat just for proposing the stick. Under pay as you throw schemes, electronic chips fitted to bins monitor and fine households which throw away too much. There was talk of Big Brother sifting through your rubbish and an unfair tax on large families. Unsurprisingly, the scheme was never taken forward.

Eric Pickles, the communities secretary, says that the new government will not go ahead with penalties for overstuffed bins. Instead, individuals can earn points for putting out more recyclable waste – points worth up to £130 in local shops. It's the same chip and bin technology, but now you earn points rather than pay fines. In a reward scheme piloted in Windsor and Maidenhead, 70% of the families offered the chance to take part did so. With every kilo of recycled waste worth 5.5 reward points, almost 6m points have been racked up so far. Instead of protests over sinister, automated bin inspectors, the good people of Windsor and Maidenhead voluntarily and possibly happily increased their recycling by 35% in six months. By January 2011 the scheme will be up and running for all households in the community – 60,000 people will get the chance to join in.

There's not much to choose between these two forms of behaviour modification. We've known for a while about reinforcing desired behaviour with rewards and extinguishing unwanted behaviour with punishments. A painful stimulus (a penalty charge) accompanying waste will lead to less wasteful behaviour. A pleasant stimulus (free stuff) accompanying recycling will lead to more recycling behaviour. There's almost no limit to what you can do with rewards and punishments. You could make a rat recycle the paper in its cage – it's just a matter of voltage.

What you can't do with this method is convey an understanding of the importance of recycling to your subject and change behaviour based on reasons rather than reactions. That's precisely the trouble with the carrot and stick approach to dealing with waste, and that's precisely why aspects of this scheme are a little suspect. It rewards people to produce more recyclable waste, rather than take steps to reduce the amount they produce in the first place. It rewards individuals for recycling disposable stuff by giving them the chance to buy yet more disposable stuff. It does nothing at all about the behaviour of the source of most of our household waste: the unnecessary packaging used by shops and suppliers. What's needed from the government isn't behaviour modification with a system of rewards and punishments. What's needed is an understanding of the problem and some help to solve it.

The point of recycling has to do with understanding the importance of reducing waste in a finite world. It costs energy and resources to make a plastic bottle, fill it with water, package it and ship it to your local shop. We currently get almost all of that energy by burning fossil fuels and doing damage to our climate. The resources which go into the bottle's production, distribution and disposal might have been used in other, better ways. Once empty, the bottle might take up space in a landfill or end up in the ocean. If you understand the value of reducing waste in a finite world – if you want to avoid a hand in wasting energy, causing climate change, squandering resources, poisoning oceans – you might think twice about buying a bottle of water. If you recycle because you earn reward points for doing so, you might just buy a lot of plastic bottles.

What is the best way to reduce the amount of waste we send to landfills? Something more subtle than carrots and sticks is needed. Recall that old bit of hippy wisdom: reduce, reuse, recycle. Recycling is third on the list. It's our last resort, the worst option. It's what we do if we can't help but use recyclable stuff in the first place. But there's a very great deal we can do instead. If the government is serious about meeting EU targets and cutting the waste we send to landfills by two thirds by 2020, it knows that it must do better than reward points for plastic bottles. It has to do something about the source of plastic bottles and the vast amount of waste produced by supermarkets each day. That's not to say it can ignore us. It also has to do something about the ordinary person's thought that buying a cabbage wrapped in plastic is a reasonable thing to do.
Posted by Mercury at 5:16 PM