Lunch with John Glenn...for a price 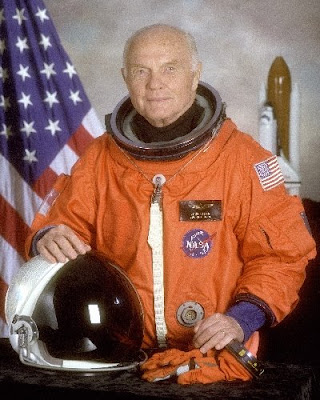 A worthy investment and a Happy Meal.

"For Sale: A Lunch Date with Astronaut John Glenn"

SPACE.com
Famed Mercury astronaut John Glenn has an open seat at his lunch table, provided you're willing to foot the bill.

Glenn, the first American to orbit the Earth, is offering an afternoon lunch as part of a charity auction for the Astronaut Scholarship Foundation, which is raising college scholarship funds for aspiring engineers and scientists.

It was 50 years ago today that NASA unveiled Glenn and the six other Mercury astronauts - the country's first spaceflyers - to the world in a frenzied press conference that made the seven men instant national heroes. On that April 9 in 1959, Glenn compared his feelings for spaceflight to those of the Wright Brothers as they prepared for their history-making air flights.

"I think we stand on the verge of something as big and as expansive as that was fifty years ago," Glenn, now 87, said in that briefing according to NASA's transcript, adding that he and the other Mercury astronauts felt lucky and blessed to be part of it. "This can mean an awful lot to this country, of course."

At the time, the United States was embroiled in a Space Race with the former Soviet Union, one that culminated in the Apollo missions that landed Americans on the moon in the late 1960s and early 1970s.Since then, more than 300 NASA astronauts have followed, with another 10 or 12 expected to join the agency's spaceflying corps in a few weeks' time.

But Glenn and his fellow Mercury astronauts - Alan Shepard, Gus Grissom, Scott Carpenter, Donald "Deke" Slayton, Walter Schirra and Gordon Cooper - have been the popular image for America's past and present astronaut corps. Five of the seven have passed away in the last five decades, with Glenn and Carpenter all that remain.

Glenn first launched into space in 1962 aboard his Mercury capsule Friendship 7. It was America's third manned spaceflight after the suborbital trips of Shepard and Grissom, but the first to reach orbit and he circled the Earth three times before landing.

In 1998, Glenn launched into space again at age 77 aboard NASA's shuttle Discovery, setting a world record for the oldest human to fly in space. Unlike his first flight, Glenn spent nine full days in space performing experiments to investigate spaceflight and the aging process. He also served as a senator for his home state of Ohio for 24 years before retiring in 1999.

The Astronaut Scholarship Foundation's last lunch date with Glenn fetched a cool $6,050 during a 2008 auction. But the experience is not the only one up for sale. Seven other astronaut experiences are for sale - including a meal with Carpenter - and other astronaut memorabilia are also up for grabs to benefit the foundation's scholarships.

While the online bidding for the foundation's auction opened Thursday, it runs through April 18. Click here for more information via the Astronaut Scholarship Foundation .