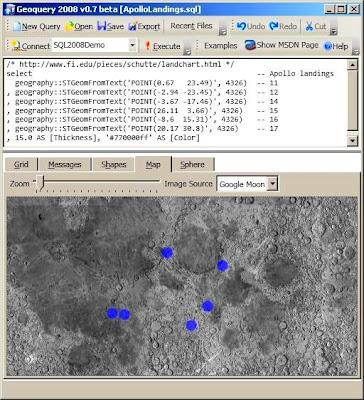 I am not in favor of total digital enhancement of photographic images. Too much room for human bias. Disclaimers must be issued when a photo is enhanced.

SPACE.com
WOODLANDS, Texas — Images of the moon gleaned from NASA spacecraft more than 40 years ago are now getting a 21st century makeover thanks to the Lunar Orbiter Image Recovery Project (LOIRP).

Back in 1966 and 1967, NASA hurled a series of Lunar Orbiter spacecraft to the moon. Each of the five orbiters were dispatched to map the landscape in high-resolution and assist in charting where best to set down Apollo moonwalkers and open up the lunar surface to expanded human operations.

By gathering the vintage hardware to playback the imagery, and then upgrading it to digital standards, researchers have yielded a strikingly fresh look at the old moon. Furthermore, LOIRP's efforts may also lead to retrieving and beefing up video from the first human landing on the moon by Apollo 11 astronauts in July 1969.

Teamed with SpaceRef.com, LOIRP's saga is one of acquiring the last surviving Ampex FR-900 machinery that can play analog image data from the Lunar Orbiter spacecraft. Wingo noted that the work is backed by NASA's Exploration Systems Mission Directorate, the space agency's Innovative Partnership Program, along with private organizations, making it possible to overhaul old equipment, digitally upgrade and clean-up the imagery via software.

LOIRP is located at NASA's Ames Research Center at Moffett Field, Calif. There, project members are taking the analog data, converting it into digital form and reconstructing the images.

By moving them into the digital domain, Wingo said, the photos now offer a higher dynamic range and resolution than the original pictures, he added.

"We're going to be releasing these to the whole world," Wingo said.

Use of the refreshed images, contrasted to what NASA's upcoming Lunar Reconnaissance Orbiter (LRO) mission is slated to produce, has an immediate scientific benefit. That is, what is the frequency of impacts on the Moon's already substantially crater-pocked surface?

"We'll be able to get crater counts," Wingo told SPACE.com. "LRO imagery of the same terrain imaged decades ago will provide a crater count over the last 40 years."

There's also a more down to Earth output thanks to LOIRP scientists.

They have used a Lunar Orbiter 1 image of the Earth for climate studies, basically a snapshot frozen in time that shows the edge of the Antarctic ice pack on August 23, 1966.

The team is working with the National Snow and Ice Data Center in Boulder, Colorado to correlate their images of the Earth with old NASA Nimbus 1 and Nimbus 2 spacecraft imagery that flew at about the same time — in the mid-1960s — as the Lunar Orbiter 1. Nimbus satellites were meteorological research and development spacecraft.

One treasure hunt outing by LOIRP may lead to finding what some term as "lost" Apollo 11 slow scan tapes, Wingo said.

"We don't think they are lost. People have been looking for the wrong tapes," he said, explaining that they were recorded on Ampex FR-900 equipment — not on another type of recorder as previously thought.

Wingo said those Apollo tapes are stored at the Federal Records Center, labeled and ready for a look see.

"We think for the 40th anniversary of Apollo we may be able to get the original slow scan tapes," Wingo said. If so, the hope is to recover them and give the public a higher-quality, never-before-seen view of human exploration of the Moon.

There is a lesson learned output from LOIRP.

"In the beginning, very few people thought this could be done...but now they have seen the results," Wingo said.

It is not enough to have 100 year recording medium, Wingo explains. Without the retention of the specific era equipment that images are archived on, it will be impossible for future generations to recover older NASA or other satellite data, he advised.

This is a general issue, not specific to the Lunar Orbiter program. The retention of critical hardware should be a requirement for flight efforts. The original historic Apollo 11 slow scan images have been lost due to inattention to this critical detail, Wingo concluded.
Posted by Mercury at 8:20 AM