Whatever it takes to learn...chemistry 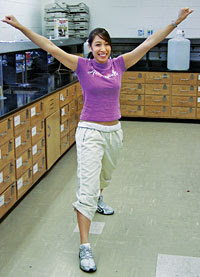 Whitney Villanueva using body geometry to represent water's electronic structure.
Sometimes the puppets have to be employed to get one's attention and understanding.

Chemical & Engineering News
INSTRUCTORS NEED to impart plenty of heavy concepts to their chemistry students, but there's no reason they can't have a little light fun in the process. Even better, there's evidence that a playful approach can pay dividends in terms of student comprehension, according to several posters presented before the Division of Chemical Education during last month's American Chemical Society national meeting in Salt Lake City.

The approaches described in these posters are enough to elicit a giggle, or at least an appreciative groan: Classroom activities include games dubbed "Al-mole-st Dead," "Krispy Khem Donut Races," and "Chemistry Battleship"; a competition called "Cake or Death"; and an exercise called "Body Geometry."

All of these activities were developed by undergraduate students mentored by James E. Becvar, a chemistry professor at the University of Texas, El Paso (UTEP). Becvar is a devotee of peer-led team learning (PLTL), an approach in which student "peer leaders" who have already studied a particular subject, such as general chemistry, help students currently taking the subject. The current students also work together to master the material. PLTL allows the students to get help from their peers, who are less intimidating than professors and have more time to help.

PLTL now comes in many different flavors. Becvar himself devised one nearly a decade ago. He told C&EN that he developed the program, which he calls "Plus Two" PLTL, in response to a colleague's challenge to improve the passing rate in UTEP's general chemistry course.

Using the Plus Two approach, UTEP now divides the students in the course into workshop sections containing a dozen students overseen by a peer leader. Attendance is mandatory at the weekly workshops, which take the place of one of the course's original three weekly lectures. The workshops include a series of collaborative learning activities and simple hands-on lab activities using household chemicals.

Early in the process of designing and selecting activities for the Plus Two program, Becvar said, it became apparent that the peer leaders themselves could be a creative source of activities.

Although he provides the peer leaders with intensive training, Becvar gives them a lot of freedom in choosing how they transmit information to their students. "I don't dictate to them: 'You will go over problems 17, 39, and 95 at the end of the chapter,' " he said. "Instead I tell them that they need to make sure that their students understand the concept of limiting reagents or the concept of enthalpy change, and I let them decide how they're going to instruct their students. It puts them a bit ill at ease," he acknowledged. "But that's part of the confidence building. That's a very strong philosophical component in this program."

Once Becvar turned the peer leaders loose, their ingenuity flourished. One peer leader, Joshua Frederick, came up with the concept of chemical speed dating. "That's where students are given partial information," Becvar said. "For example, one student has a card that has reactants on it, and another student has a card that has the products on it. Then they have to walk around and find each other in the room."

Another peer leader, Lizabeth T. Ronquillo, conceived an exercise she dubbed "Body Geometry." Ronquillo is a chemistry major in her senior year at UTEP.

During her training to become a peer leader, she recalled, "I knew that a lot of students have a hard time discerning the difference between molecular and electronic geometry when they're studying the shapes that molecules make. So, I said, 'There's got to be something that we can do aside from drawing pictures and playing with models.' " That's when it popped into her head that people themselves would make good models, particularly for hydrocarbons, where carbon predominates. "We have one belly button, which could be the central atom, and we have four limbs, and that's the same way that carbon bonds," she explained. Then she expanded the concept to work with other types of compounds.

Someone demonstrating the electronic structure of water, for instance, would stand with one leg in front and one in back, with arms raised overhead in a V. The student's belly button would represent the oxygen atom, feet would be the hydrogen atoms, and each hand would be a lone pair of electrons.

THE FUN BEGINS with more complex molecules. "A sulfur atom can make six bonds, and nobody has six limbs," Ronquillo said. It takes the students a while, but they eventually figure out that they can use two people to represent a molecule such as sulfur hexachloride. If the students stand back to back, their heads would be one chloride atom, their feet would be another, and their extended arms would be the other chlorides.

The students get into the spirit pretty quickly, Ronquillo said. After writing the Lewis structure for a molecule, they race to be the first to show their classmates the molecule's Body Geometry. "It becomes a contest," she added. "It's a lot of fun. Students are pulled into this. It's better than sitting down and having a study hall or just going home and studying by yourself."

Ronquillo is spreading the word to other schools. This winter, she and two other peer leaders—Cesar Ramirez and Lela Ruck—went to CCNY, which runs a PLTL program for chemistry students using its weekly workshops to go through a workbook. "We went over there to present how we play games in our workshop," Ronquillo told C&EN. "We had CCNY peer leaders, peer leader trainees, and a few faculty members get up and do Body Geometry and a couple other games. They were so excited, and they thought it was an awesome idea."

These exchanges, and the program as a whole, pay off for the peer leaders themselves. The experience shows the team leaders that "they can stand on their own two feet and make presentations," Becvar said. "They are, in fact, budding professional teachers," he added. The program has had what Becvar called an unexpected but significant benefit: an increase in the number of students who consider high school teaching as a career. About 10% of the peer leaders who have gone through the Plus Two program are now teaching high school chemistry—at least double the prior number.

The Plus Two program has also worked wonders for the peer leaders' students at UTEP. In the nine years since the introduction of the program, Becvar said, the percentage of students who pass the first-semester general chemistry course with a grade of A, B, or C has risen from 53% to about 65%. And more students are sticking with chemistry as a major. The number of B.S. degrees awarded in chemistry per year has risen from an average of 10 to more than 30.
Posted by Mercury at 2:52 PM

Email ThisBlogThis!Share to TwitterShare to FacebookShare to Pinterest
Labels: chemistry