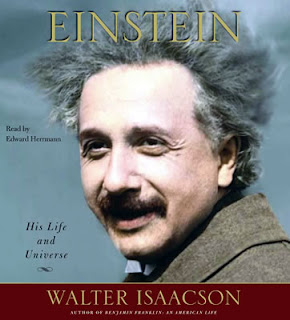 Einstein: His Life and Universe

"The Scale of Einstein, From Faith to Formulas"

The New York Times
The story of Albert Einstein's life calls for a protean biographer, not to mention a fearless one. Conveying the magnitude of Einstein’s scientific achievements is tough enough, but that’s just the start. His geopolitics, faith, cultural impact, philosophy of science, amorous affairs, powers of abstraction and superstar reputation are all part of this subject. So are the two world wars through which Einstein lived and the internecine physics-world struggles in which he became embroiled.

Then there are the odd quirks and the pricelessly prophetic anecdotes, as when one Zurich classmate of the budding genius went home to tell his parents that "this Einstein will one day be a great man." Many of these need to be included, and matters of scale make this job dauntingly difficult too. Einstein's earth-shaking concept of general relativity is directly juxtaposed, in Walter Isaacson's confidently authoritative "Einstein: His Life and Universe," with a set of household rules that the great man wrote to keep his first wife at bay. "You will stop talking to me if I request it," this document asserted. "You will not expect any intimacy from me, nor will you reproach me in any way."

Mr. Isaacson deals clearly and comfortably with the scope of Einstein's life. If his highly readable and informative book has an Achilles' heel, it's in the area of science. Mr. Isaacson had the best available help (most notably the physicist Brian Greene's) in explicating the series of revelations Einstein brought forth in his wonder year, 1905, and the subsequent problems with quantum theory and uncertainty that would bedevil him.

But these sections of the book are succinctly abbreviated. Paradoxically that makes them less accessible than they would have been through longer, more patient explication. Still, the cosmic physics would be heavy sledding in any book chiefly devoted to Einstein's life and times, and Mr. Isaacson acknowledges that. "O.K., it's not easy," he writes, "but that's why we're no Einstein and he was."

In his introduction to "Einstein," Mr. Isaacson sounds dangerously as if he is again trumpeting the virtues of a founding father (his last book was a biography of Benjamin Franklin). "Tyranny repulsed him, and he saw tolerance not simply as a sweet virtue but as a necessary condition for a creative society," he proclaims. Whiffs of a textbook tone are similarly alarming. ("Einstein would become a supporter of world federalism, internationalism, pacificism, and democratic socialism, with a strong devotion to individual liberty and freedom of expression.") But over all this is a warm, insightful, affectionate portrait with a human and immensely charming Einstein at its core.

"Oh my! That Johnnie boy!/So crazy with desire/While thinking of his Dollie/His pillow catches fire." That was a poem written by the love-struck future patent clerk of Bern, Switzerland (he would spend seven years in that job while writing his greatest scientific papers) to Mileva Maric, the first of two women he would marry. (To dissolve this union, the ever-confident Einstein offered Maric the money from a Nobel Prize he had not yet won.) It reveals a different side of Einstein than his famous "On a Heuristic Point of View Concerning the Production and Transformation of Light" did.

But in Mr. Isaacson's artfully seamless account, the genius and the flirt are remarkably well reconciled. And that first marriage was based on both. "I can already imagine the fun we will have," he wrote to Maric about a prospective vacation. "And then we'll start in on Helmholtz's electromagnetic theory of light."

Mr. Isaacson does a similarly graceful job of integrating Einstein's science with his broader philosophical concerns, especially the global worries that plagued him with the approach of the Second World War. Even as a committed pacifist he remained primarily a scientist and revised his opinions as fate required. "For a scientist, altering your doctrines when the facts change is not a sign of weakness," Mr. Isaacson underscores.

And the man who had once listed his religion as "Mosaic" when applying for a professorship in Prague became much more thoughtful about Judaism in later years. Whatever Einstein's precise faith, Mr. Isaacson says, "his beliefs seemed to arise from the sense of awe and transcendent order that he discovered through his scientific work."

With the help of many witty, candid letters, Mr. Isaacson offers a wonderfully rounded portrait of the ever-surprising Einstein personality. Equally important is the Einstein myth, and the material on this subject is even more entertaining. Einstein horrified his colleagues by enjoying his vast celebrity. ("Einstein's personality, for no clear reasons, triggers outbursts of a kind of mass hysteria," the German consul reported to Berlin as the great man made one of his rock-star visits to New York.) He also stymied the press in its efforts to keep up with his accomplishments. Mr. Isaacson has great fun with the reportorial frenzy that surrounded each new pearl of Einsteinian wisdom. Among the headlines that appeared in The New York Times: "Unintelligible to Laymen" and "Stars Not Where They Seemed or Were Calculated to Be, but Nobody Need Worry."

Mr. Isaacson is also keenly attuned to the intellectual crises hidden by the hoopla. As Einstein aged, he changed from a fierce young iconoclast to a pillar of science, resistant to advances in the very quantum ideas that he himself had brought forth. "The intellect gets crippled," he said of growing older, "but glittering renown is still draped around the calcified shell." Here as throughout the book Mr. Isaacson asks the right questions. (“So what made Einstein cede the revolutionary road to younger radicals and spin into a defensive crouch?”) And he answers them with the clear, broad grasp of complex issues that make this book an illuminating delight.

Amazon.com: What kind of scientific education did you have to give yourself to be able to understand and explain Einstein's ideas?

Isaacson: I've always loved science, and I had a group of great physicists--such as Brian Greene, Lawrence Krauss, and Murray Gell-Mann--who tutored me, helped me learn the physics, and checked various versions of my book. I also learned the tensor calculus underlying general relativity, but tried to avoid spending too much time on it in the book. I wanted to capture the imaginative beauty of Einstein's scientific leaps, but I hope folks who want to delve more deeply into the science will read Einstein books by such scientists as Abraham Pais, Jeremy Bernstein, Brian Greene, and others.

Amazon.com: That Einstein was a clerk in the Swiss Patent Office when he revolutionized our understanding of the physical world has often been treated as ironic or even absurd. But you argue that in many ways his time there fostered his discoveries. Could you explain?

Isaacson: I think he was lucky to be at the patent office rather than serving as an acolyte in the academy trying to please senior professors and teach the conventional wisdom. As a patent examiner, he got to visualize the physical realities underlying scientific concepts. He had a boss who told him to question every premise and assumption. And as Peter Galison shows in Einstein's Clocks, Poincare's Maps, many of the patent applications involved synchronizing clocks using signals that traveled at the speed of light. So with his office-mate Michele Besso as a sounding board, he was primed to make the leap to special relativity.

Amazon.com: That time in the patent office makes him sound far more like a practical scientist and tinkerer than the usual image of the wild-haired professor, and more like your previous biographical subject, the multitalented but eminently earthly Benjamin Franklin. Did you see connections between them?

Isaacson: I like writing about creativity, and that's what Franklin and Einstein shared. They also had great curiosity and imagination. But Franklin was a more practical man who was not very theoretical, and Einstein was the opposite in that regard.

Amazon.com: Of the many legends that have accumulated around Einstein, what did you find to be least true? Most true?

Isaacson: The least true legend is that he failed math as a schoolboy. He was actually great in math, because he could visualize equations. He knew they were nature's brushstrokes for painting her wonders. For example, he could look at Maxwell's equations and marvel at what it would be like to ride alongside a light wave, and he could look at Max Planck's equations about radiation and realize that Planck's constant meant that light was a particle as well as a wave. The most true legend is how rebellious and defiant of authority he was. You see it in his politics, his personal life, and his science.

Amazon.com: At Time and CNN and the Aspen Institute, you've worked with many of the leading thinkers and leaders of the day. Now that you've had the chance to get to know Einstein so well, did he remind you of anyone from our day who shares at least some of his remarkable qualities?

Isaacson: There are many creative scientists, most notably Stephen Hawking, who wrote the essay on Einstein as "Person of the Century" when I was editor of Time. In the world of technology, Steve Jobs has the same creative imagination and ability to think differently that distinguished Einstein, and Bill Gates has the same intellectual intensity. I wish I knew politicians who had the creativity and human instincts of Einstein, or for that matter the wise feel for our common values of Benjamin Franklin.

Thanks to POSP stringer Tim for the notice.
Posted by Mercury at 6:51 AM

Email ThisBlogThis!Share to TwitterShare to FacebookShare to Pinterest
Labels: "Einstein: His Life and Universe", Walter Isaacson