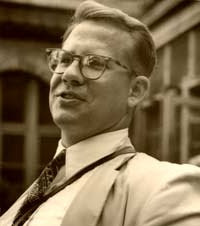 UC BerkeleyNews
BERKELEY — Ernest W. Adams, an emeritus professor of philosophy, died on March 29, shortly after being diagnosed with an advanced case of liver cancer. He was 82.

Adams joined the department in 1956, following graduate studies in philosophy at Stanford (where he spent the 1965-66 academic year, at the Center for Study in the Behavioral Sciences); he continued teaching at Berkeley until his retirement in 1991.

Adams, a fellow of the American Academy of Arts and Sciences, worked in philosophical logic and the philosophy of science; he was a founding member of the Group in Logic and Methodology of Science at Berkeley. He was best-known for his research on conditionals; his influential book The Logic of Conditionals appeared in 1975. (According to Charles Chihara, a professor emeritus of philosophy at Berkeley, Adams was thanked by one expert regarding this work for his "almost single-handed creation of a rich field of philosophical inquiry.") Adams also made important contributions in a number of other areas, including the foundations of geometry and physics, as well as in utility theory, game theory, and general measurement theory. A volume of essays in honor of his work, Probability and Conditionals, was published in 1994.

Adams is survived by Anne Adams, his wife of 52 years; two sons, James (a professor of political science at UC Davis) and William; and two grandchildren.

A memorial symposium will be held during the 2009-10 academic year; details will be announced on the philosophy department website .

The Logic of Conditionals: An Application of Probability to Deductive Logic

Email ThisBlogThis!Share to TwitterShare to FacebookShare to Pinterest
Labels: "The Logic of Conditionals", Ernest W. Adams, philosophy, philosophy of science

does anyone else, when reading these sad passing away, always calculate your current age and compare it to the deceased and determine the years left before you join that circle.....i find myself doing this a lot these last few years

EVERY DAMN DAY OF THE WEEK--YES. Mortality is a big issue now.