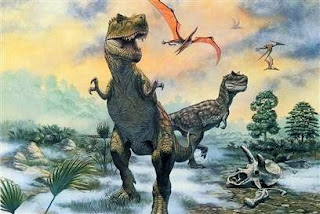 Do you believe that dinosaurs became extinct swiftly or slowly?

Well, the question is kind of ambiguous and hinges on definition...what is meant by "swift" and "slow". Popular belief supports some cataclysmic event...object hitting the Earth. Sure, the initial explosion would eliminate many dinosaurs but not all over the Earth. The resulting fires, particulates, and reduced exposure to the sun would play a significant part. Food chains would be disrupted. Labored breathing for the big ones, warmth may have been scarce. I suppose the answer is both.

ScienceDaily
The enduringly popular theory that the Chicxulub crater holds the clue to the demise of the dinosaurs, along with some 65 percent of all species 65 million years ago, is challenged in a paper to be published in the Journal of the Geological Society on April 27, 2009.

The crater, discovered in 1978 in northern Yucutan and measuring about 180 kilometers (112 miles) in diameter, records a massive extra-terrestrial impact.

When spherules from the impact were found just below the Cretaceous-Tertiary (K-T) boundary, it was quickly identified as the "smoking gun" responsible for the mass extinction event that took place 65 million years ago.

It was this event which saw the demise of dinosaurs, along with countless other plant and animal species.

However, a number of scientists have since disagreed with this interpretation.

The newest research, led by Gerta Keller of Princeton University in New Jersey, and Thierry Adatte of the University of Lausanne, Switzerland, uses evidence from Mexico to suggest that the Chicxulub impact predates the K-T boundary by as much as 300,000 years.

"Keller and colleagues continue to amass detailed stratigraphic information supporting new thinking about the Chicxulub impact, and the mass extinction at the end of the Cretaceous," says H. Richard Lane, program director in the National Science Foundation (NSF)'s Division of Earth Sciences, which funded the research. "The two may not be linked after all."

From El Penon and other localities in Mexico, says Keller, "we know that between four and nine meters of sediments were deposited at about two to three centimeters per thousand years after the impact. The mass extinction level can be seen in the sediments above this interval."

Advocates of the Chicxulub impact theory suggest that the impact crater and the mass extinction event only appear far apart in the sedimentary record because of earthquake or tsunami disturbance that resulted from the impact of the asteroid.

"The problem with the tsunami interpretation," says Keller, "is that this sandstone complex was not deposited over hours or days by a tsunami. Deposition occurred over a very long time period."

The study found that the sediments separating the two events were characteristic of normal sedimentation, with burrows formed by creatures colonizing the ocean floor, erosion and transportation of sediments, and no evidence of structural disturbance.

The scientists also found evidence that the Chicxulub impact didn't have the dramatic impact on species diversity that has been suggested.

At one site at El Penon, the researchers found 52 species present in sediments below the impact spherule layer, and counted all 52 still present in layers above the spherules.

"We found that not a single species went extinct as a result of the Chicxulub impact," says Keller.

This conclusion should not come as too great a surprise, she says. None of the other great mass extinctions are associated with an impact, and no other large craters are known to have caused a significant extinction event.

Keller suggests that the massive volcanic eruptions at the Deccan Traps in India may be responsible for the extinction, releasing huge amounts of dust and gases that could have blocked out sunlight and brought about a significant greenhouse effect.
Posted by Mercury at 7:44 AM

The big pleasure here is that science is working as it should....