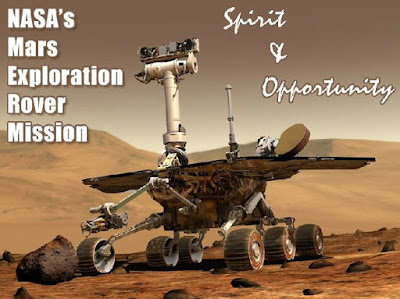 Cheaper and safer than a shuttle...Spirit and Opportunity are still provoding data.

"Mars Rovers Powering On After 5 years"

Science@NASA
In January 2004, NASA landed two identical robotic rovers named Spirit and Opportunity on the surface of Mars. The twins were primed for a brief 3-month mission to tell us a story of water and possibly life itself in the planet's past.

More than five years later, the dynamic duo are still roving the Red Planet, engaged in a saga of overachievement that has transformed Mars exploration

"They've taught us how to organize large teams of scientists and engineers to operate robotic rovers on a distant planet. We all had to learn to work together effectively year after year to squeeze the most possible science from the rovers."

The teams are still squeezing.

Among the remarkable findings from these solar-powered robots over the half-decade: Mars wasn't always as cold and dry as it is today. Maybe it didn't look like a set for The Sound of Music, but it had water and was warm enough for life.

"We now know how to negotiate sand dunes and piles of rocks," says Squyres, "and perhaps more importantly - how to avoid them. We've translated five years of experience into new and improved maps and driving software that will help us in the remainder of our mission, and will also help future rovers."

Hopeful planners are already setting future operations for the twins, assuming the pair will continue to plow ahead but acknowledging that one or both of the rovers could fail at any time. After all, these robots aren't exactly spring chickens. Spirit has been driving backwards since one of its wheels jammed in 2006, and a broken electrical wire has reduced movement of Opportunity's robotic arm.

Provided the twins hold up a while longer, here are the latest plans:

Opportunity, "the lucky vehicle since day 1" according to Squyres, has been crater-hopping since the beginning of the mission and is now heading south to the largest crater yet. The Endeavor crater is 20 km in diameter and 100s of meters deep.

"We'll have to double the odometer reading on a five year old vehicle to get there," says Squyres. "And it will take at least two years to reach it. [100 meters per day is an average day for Opportunity.] It'll be a long march across the plains, but it will be well worth it. The deeper the crater the older the history of Mars we can look at."

Ray Arvidson, deputy principal investigator, elaborates: "Endeavor is an intriguing target because the rocks close to it look different from the ones surrounding the other craters Opportunity has visited. Part of Endeavor crater's rim is sticking up - Mars' ancient bedrock exposed - and rocks nearby may be suggestive of acidic lakes on Mars' surface billions of years ago."

And what about the other twin?

"Spirit is the more challenging rover to operate," says Squyres. "There's not as much wind at its location to clean the solar arrays, and that affects the vehicle's power. Also, Spirit has to travel a more challenging terrain. The rocks and loose sand at Spirit's location are treacherous. Of course, to top it all off, Spirit is driving backwards."

"Luckily, Spirit's landing site features a compact geology with enormous diversity and variability in a all area."

Spirit is now creeping steadily along a route to von Braun, an interesting looking mesa-shaped cap-rock that stands only about 250 meters away but will take months to reach. Then Spirit will head to a 30-meter diameter pit that may be a volcanic explosion crater - and perhaps a location for hydrothermal activity.

"Because of the geology of its surroundings, Spirit specializes in looking for evidence in the rock record of water-charged explosive volcani," says Arvidson. "Such areas could have once supported life."

"Home Plate, where Spirit spent the winter, is a volcanic structure eroded down so we can see the layers," explains Arvidson. "And we think von Braun and the neighboring Goddard structure may be made of the same stuff."

The Mars Exploration Team members have high hopes for the rovers to achieve all these ambitious goals but are mindful of the twins' limitations.

"We have no way of knowing what the future holds for the rovers at this point," says Squyres. "The mission could easily end tomorrow. But, the miracle could continue."

Arvidson recalls the day, over five years ago, when Spirit first touched down on the red planet.

"I was on a plane on my way back from Hawaii, headed to the Los Angeles airport, when Spirit was due to land. I just had to know if the rover had made it, so I asked the pilot to radio ahead to air traffic controllers and find out if Spirit had landed safely. I was overjoyed when he did so and confirmed that Spirit was sitting on Mars' surface, ready to go!"