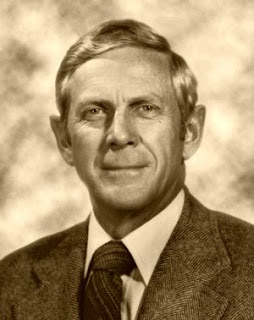 Los Angeles Times
Dwight R. "Rocky" Crandell, a U.S. Geological Survey volcanologist whose persistent tracking of deep layers of mud led to a pioneering reassessment of volcano hazards in the Pacific Northwest, died April 6 at a hospice in Wheat Ridge, Colo., from a heart attack. He was 86.

His death was confirmed by James W. Vallance, a research geologist and friend of Crandell at the USGS Cascades Volcano Observatory in Vancouver, Wash.

In 1978, Crandell and his longtime scientific partner, Donal R. Mullineaux, warned in a report that the Mt. St. Helens volcano 150 miles southeast of Seattle could erupt within 20 years. It did, in a furious blast in May 1980, resulting in 57 deaths.

Crandell and Mullineaux's studies began in the early 1950s, while assigned to map the Puget Sound lowlands southeast of Seattle, where the men overturned what was then the conventional wisdom that the area's landscape had been shaped mainly by glaciers.

Filling notebooks with observations of deep layers of mud beneath the surface in Washington state, then tracing the mud for years, they eventually found it had come from high on the slopes of 14,411-foot Mt. Rainier, the tallest volcano in the 48 contiguous states, previously thought to pose little danger.

They proved that about 5,600 years earlier, the summit of Mt. Rainier had collapsed in an eruption that caused a landslide massive enough to reach Puget Sound near Tacoma, filling some valleys up to 400 feet deep. That awakened the recognition that a similar event could endanger hundreds of thousands of people living atop the ancient mudflows.

The approach used by Crandell and Mullineaux formed the basis of today's volcano hazard assessment methodology and led to discoveries of the violent past and danger posed by Mt. St. Helens. Since the volcano's 1980 eruption, mudflow warning systems have been installed nearby and evacuation drills are held.

Crandell was born Jan. 25, 1923, in Galesburg, Ill., and earned his "Rocky" nickname while studying geology in college. He received a bachelor's from Knox College in Galesburg and a doctorate from Yale University. In between, he served in the Army during World War II, fighting in Germany as a lieutenant in a mortar platoon.

He began working for the USGS in 1951 and for most of his career was based near Denver. He did most of his fieldwork on Pacific Northwest ash falls, mudflows and lava extrusions in the summer, then spent winters analyzing the rock and soil samples gathered earlier.

"Rocky was a consummate field geologist," Dan Miller, a USGS volcanologist, told the Seattle Times. "He was willing to hike miles and miles to get to an outcrop, and go back day after day."

Crandell retired from the USGS in the mid-1980s but continued to study Mt. St. Helens.

Survivors include two daughters, three grandchildren and a great-grandchild. His wife, Marion, died in 2004. A son died in 1965.
Posted by Mercury at 12:18 PM