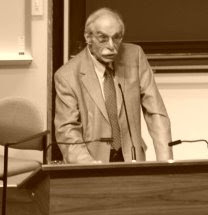 New York Times
Martin J. Klein, a historian of modern physics and the editor of a vast collection of papers that documented the years in which Albert Einstein completed his revolutionary work on the general theory of relativity, died Saturday in Chapel Hill, N.C. He was 84 and lived in Chapel Hill.

His death was confirmed by his daughter Rona.

Dr. Klein, originally a physicist, was editor of "The Collected Papers of Albert Einstein" (Princeton University Press) from 1988 to 1998. The project started in the mid-1970s and has so far published 11 volumes of Einstein's scientific and personal papers. Dr. Klein led the team that produced Volumes 3 through 6, covering 1909 through 1917.

Einstein published his general theory of relativity in 1916. In simple terms, it states that matter curves space and space moves matter, and is the foundation for the modern understanding of the evolution of the universe.

But, as Diana K. Buchwald, the current editor of the Einstein Papers Project, now based at the California Institute of Technology, said: "Before he became editor of the Einstein papers, Dr. Klein's reputation as a major historian of physics had already been established. He published a number of remarkable papers, investigations of the birth and the foundation of modern physics."

Dr. Klein had done previous work on Einstein and had analyzed the research of Einstein's fellow physicists Max Planck, Erwin Schrödinger, Niels Bohr, Josiah Willard Gibbs and Paul Ehrenfest. In 1970, he published a biography, "Paul Ehrenfest: The Making of a Theoretical Physicist" (North Holland Publishing Company). Dr. Ehrenfest, a friend of Einstein’s, made major contributions in statistical mechanics and its relation to quantum mechanics.

From 1949 to 1966, Dr. Klein was a physics professor at the Case Institute of Technology in Cleveland, now Case Western Reserve University. There he evolved from teaching physics to teaching its history. In 1967, he joined the faculty of Yale, and four years later became chairman of its department of science history.

While at Yale, he took over as editor of the Einstein project. His research team dealt with the years during which Einstein moved from his early accomplishments — the theory of special relativity and papers on Brownian motion and the photoelectric effect, which postulated that light behaves as if it were particles as well as waves — to his work on general relativity. General relativity deals with gravity and is the basis for conclusions about such colossal phenomena as the Big Bang, the birth and death of stars, black holes and the expansion of the universe.

In 2005, Dr. Klein won the Abraham Pais Prize, the first major award for the history of physics. The citation said his work had "profoundly influenced generations of historians of physics."

Martin Jesse Klein was born in the Bronx on June 25, 1924, the only child of Adolph and Mary Neuman Klein, both schoolteachers. At 14, he graduated from James Monroe High School. He received a bachelor’s degree in math at Columbia University in 1942 and a master's degree in physics there in 1944, then received a Ph.D. in physics from the Massachusetts Institute of Technology in 1948.

Dr. Klein's first two marriages, to Miriam Levin and Linda Booz, ended in divorce. His third wife, Joan Blewett, died in 2006. Besides his daughter Rona, he is survived by two other daughters from his first marriage, Sarah Zaino and Nancy Klein; and a daughter from his second marriage, Abby Klein.

"He was way younger than me; it was embarrassing, " Dr. Lederman said Tuesday of Dr. Klein. "He won most of the awards at graduation: the chemistry prize, the history prize, English composition. There aren't many like him with a thorough knowledge of physics and the ability to put it into historical context."