"400 Years of the Telescope" on PBS this Friday 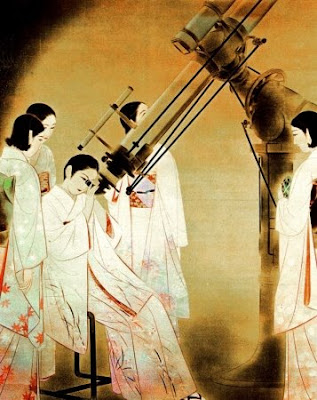 Mark your calendar for this Friday night [April 10th] PBS will air "400 Years of the Telescope".

TRIBUNE-REVIEW
He filmed the world's most powerful telescopes on five continents. But what really moved Kris Koenig was looking through the primitive instrument that started it all.

During the making of the PBS documentary "400 Years of the Telescope," Koenig visited the Institute and Museum of the History of Science in Florence, Italy. There, he was permitted a peek through the telescope that Galileo used to gaze skyward in 1609.

The instrument that sparked a scientific revolution was a humble, dented cylinder roughly a yard long, with a lens pocked with air bubbles.

"It's impressive that he was able to do the discoveries he did," Koenig says. "It's a very difficult telescope, optically, to look through. He was obviously a very patient man."

"400 Years of the Telescope," which premieres at 10 p.m. Friday on WQED, examines how the telescope altered man's relationship with the universe, from Galileo through the Hubble Space Telescope and beyond.

Aided by the magnifying power of the telescope, Galileo discovered the four largest moons of Jupiter, the phases of Venus and the mountains of the moon. His observations also led him to support Nicolaus Copernicus' theory that the Earth revolved around the sun and not vice versa -- a supposition that eventually led to his conviction as a heretic by the Roman Catholic Church.

"The telescope helped prove that the Earth wasn't the center of the universe," says Tom Reiland, founder and director of the Nicholas E. Wagman Observatory in Deer Lakes Park, "It wasn't even the center of our solar system."

Koenig wrote, produced and directed "Telescope" through his California-based company, Interstellar Studios. He interviewed cosmologists and astronomers from around the world, including Wendy Freedman, director of the Carnegie Institute Washington Observatories, and Chris Corbally, vice director of the Vatican Observatory in Rome. The documentary includes footage of the dormant volcano Mauna Kea in Hawaii, which has 13 observatories.

While it added inestimably to our body of knowledge, the most profound effect of the telescope might have been to show us how little we really know of the universe, Koenig says.

"In reality, '400 Years of the Telescope' is less about the history of the telescope and more about the future of the telescope," Koenig says. "What we are trying to show is that we are as ignorant today in our understanding of the universe as Galileo was 400 years ago."

The documentary explores new theories, such as dark energy, a mysterious force that is accelerating the expansion of the universe, and provides a glimpse of a new generation of super-telescopes, which will have lenses the size of football fields. One is the European Extremely Large Telescope, or EELT. It will most likely be built on a mountaintop in Chile, where atmospheric turbulence is minimal.

"These telescopes that are coming online are 10- to 100-fold better in light gathering and resolution than we have today," Koenig says. "Our view of the universe today will not be our view in 20 years."

Two new survey telescopes that are in the planning stages, the Pannstarr and LSST (Large Synoptic Survey Telescope), will enable scientists to detect asteroids up to 30 years before their possible collision with Earth.

"They'll be online in another five to 10 years," Koenig says.

Galileo built his own telescope after hearing about the new novelty "spyglass," a tube-shabed object that magnified distant objects. That telescope had less power than a pair of modern-day opera glasses, says Peter Machamer, professor of history of philosophy and science at the University of Pittsburgh and an authority on Galileo.

Galileo's discovery that the moon had mountains and craters also disproved Aristotle's theory that matter in space was physically different from that on Earth.

"There's just one kind," Machamer says. "When he looks at the moon, when he finds mountains, this is the support that there's only one kind of matter in the universe."

"400 Years of the Telescope" is part of the International Year of Astronomy 2009, a global celebration of astronomy and its contributions to society and culture. It was created by UNESCO and the International Astronomical Union, the same world body that demoted Pluto from its status as a planet in August 2006.

It is the first PBS documentary to be filmed on 4K digital cinema technology. The process renders a picture with more than five times the pixels of standard high definition.

CARLA BEFERA PUBLIC RELATIONS [many photographs available]
Posted by Mercury at 6:17 AM

Email ThisBlogThis!Share to TwitterShare to FacebookShare to Pinterest
Labels: 400 Years of the Telescope, astronomy, PBS, telescopes