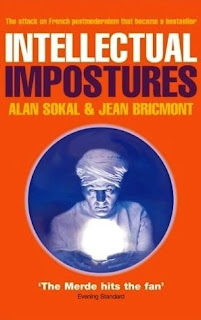 In 1996, an article entitled "Transgressing the Boundaries: Toward a Transformative Hermeneutics of Quantum Gravity" was published in the cultural studies journal Social Text. Packed with recherché quotations from "postmodern" literary theorists and sociologists of science, and bristling with imposing theorems of mathematical physics, the article addressed the cultural and political implications of the theory of quantum gravity. Later, to the embarrassment of the editors, the author revealed that the essay was a hoax, interweaving absurd pronouncements from eminent intellectuals about mathematics and physics with laudatory--but fatuous--prose.

In Intellectual Imposteurs, Alan Sokal, the author of the hoax, and Jean Bricmont contend that abuse of science is rampant in postmodernist circles, both in the form of inaccurate and pretentious invocation of scientific and mathematical terminology and in the more insidious form of epistemic relativism. When Sokal and Bricmont expose Jacques Lacan's ignorant misuse of topology, or Julia Kristeva's of set theory, or Luce Irigaray's of fluid mechanics, or Jean Baudrillard's of non-Euclidean geometry, they are on safe ground; it is all too clear that these virtuosi are babbling.

Their discussion of epistemic relativism--roughly, the idea that scientific and mathematical theories are mere "narrations" or social constructions--is less convincing, however, in part because epistemic relativism is not as intrinsically silly as, say, Regis Debray's maunderings about Gödel, and in part because the authors' own grasp of the philosophy of science frequently verges on the naive. Nevertheless, Sokal and Bricmont are to be commended for their spirited resistance to postmodernity's failure to appreciate science for what it is. --Glenn Branch, Amazon.com.

Here is the preface and Chapter One


This tidbit was provided by anti-postmodernist stringer Tim.
Posted by Mercury at 3:04 PM