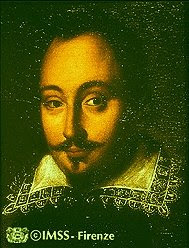 Prince Federico Cesi
1585-1630
In 1611, the word "telescope" was first used in public by Prince Federico Cesi at a banquet held by the pioneer scientific society, the Academy of Linceans (or Lynxes, of which he was a founder). It was held to Honor Galileo, on a grand hillside estate. After Galileo showed the guests the satellites of Jupiter, other celestial marvels, and even an inscription on a building three miles away. Although the name was announced by Cesi to christen Galileo's instrument, the word telescopio (in Italian) was perhaps devised by a Greek poet-theologian, who happened to be present, from Greek words* (tele = far and scopeo = see). In 1625, another Lincean, Giovanni Faber of Bamberg (1574 - 1629) coined the analogous word microscope.

From The Galileo Project:

Federico Cesi (1585-1630) and the Accademia dei Lincei
The Cesi family belonged to the high aristocracy of Rome and the Papal States. It originated in the little town of Cesi, near Rome, and its wealth derived largely from high offices connected with the church. (Frederico Cesi's paternal uncle, Bartolomeo Cesi, became a cardinal.) At the turn of the seventeenth century, its wealth was being eroded (like that of similar Roman families) by the ruinous expense of keeping up their "life-style of the rich and famous." The many titles held by members of the family were mostly empty honors with little or no economic significance.

Cesi, son of Federico Cesi (hereditary Marquis of Monticello and Duke of Acquasparta, and later made a prince by Pope Paul V) and Olimpia Orsini, was born in Rome in 1585. He was educated privately and at an early age became interested in natural science. He was convinced, however, that nature should be studied directly, not through the filter of Aristotelian philosophy--an idea that was being enunciated by a growing number of learned men, among whom the most influential voice was to become that of Francis Bacon.

Cesi's father was strongly opposed to the career direction in which these studies were taking young Federico, but his mother (herself from a wealthy and powerful Roman family, the Orsini) provided him with both moral and financial support.

In 1603, at age eighteen, Cesi founded the Accademia dei Lincei, the Lyncean Academy. Its name came from Lynceus, the argonaut of Greek mythology renowned for his sharpness of sight. Its initial members were Cesi, the mathematician Francesco Stelluti, the physician Johannes Eck from the Low Countries, and the polymath Anastasio De Fillis. The members lived communally and almost monastically in Cesi's house, where he provided them with books and laboratory equipment. In a 1605 document, the goals of the academy were stated to be "not only to acquire knowledge of things and wisdom, and living together justly and piously, but also peacefully to display them to men, orally and in writing, without any harm." Cesi devoted the rest of his life to these goals and his academy.

The Lyncean Academy was steadfastly opposed by Cesi's father and other Roman aristocrats. Its members were accused of black magic, opposition to Church doctrine, and living a scandalous life. Eck was forced to leave Rome, and for some time the membership of the academy was scattered. Cesi kept in close contact with all of them through correspondence. During a stay in Naples, Cesi came to know the polymath Giambattista della Porta, and he considered setting up a branch of the academy in that city. Porta became a member of the academy in 1610.

The most famous member of the academy was Galileo, who was inducted in the spring of 1611, during his visit to Rome. The academy's most celebrated publications were those of Galileo, first his Letters on Sunspots in 1613, and then his Assayer in 1623. After Galileo's induction, the membership grew rapidly, and at its height the Lyncean Academy had 32 members, including many in foreign countries.

Cesi's academy was very much a personal academy. Its impetus and funds came from him exclusively. When, in 1630, he died suddenly, his academy died with him. Galileo was just beginning the tedious process of obtaining a license for his Dialogue Concerning the Two Chief World Systems, and the plan had been for the academy to sponsor the book and pay for the printing costs.

William B. Ashworth, Consultant, History of Science Collection, Linda Hall Library, has written me a response. The correspondence is as follows...

I originally wrote him in response to Linda Hall Library's daily newsletter...

Christiaan Huygens was born Apr. 14, 1629, in The Hague. Huygens had the misfortune to occupy the same century as Isaac Newton; otherwise, he would probably be acclaimed as the greatest mathematical physicist of his era. He discovered the law of centrifugal force, the laws of impact (correcting the erroneous laws of Descartes), and the law of the pendulum. He invented the first practical pendulum clock, which was much more accurate than any preceding timepiece. He discovered the rings of Saturn, not by building a better telescope, but by thinking about the problem of the discordant appearances of Saturn and solving it with a model using a thin flat ring. In his last book, he even speculated about the possibility of life on other worlds. The Linda Hall Library has all of Huygens' major works in its History of Science Collection. In 1655, Huygens discovered Titan, the first and largest moon of Saturn (for this he did use a telescope). In 1997, NASA sent a spacecraft named Cassini to orbit Saturn, and it carried a smaller spacecraft to study Titan. The smaller probe, built by ESA, the European Space Agency, was named Huygens, and it successfully landed on Titan on Jan. 14, 2005, taking some remarkable photographs along the way of Titan's frozen pebbly surface. One wonders if Huygens, when he wrote about the possibility of life on Saturn, ever dreamed that his namesake would one day be standing there.

I feel like James Burke and his Connections television series...

In 1611, the word "telescope" was first used in public by Prince Federico Cesi at a banquet held by the pioneer scientific society, the Academy of Linceans (or Lynxes, of which he was a founder). It was held to Honor Galileo, on a grand hillside estate. After Galileo showed the guests the satellites of Jupiter, other celestial marvels, and even an inscription on a building three miles away. Although the name was announced by Cesi to christen Galileo's instrument, the word telescopio (in Italian) was perhaps devised by a Greek poet-theologian, who happened to be present, from Greek words* (tele = far and scopeo = see). In 1625, another Lincean, Giovanni Faber of Bamberg (1574 - 1629) coined the analogous word microscope.

And this leads me to the Cesi Codex...

The Cesi Codex was produced between 1625 and 1630 under the guidance of Prince Federico Cesi, founder of the Accademia Nazionale dei Lincei in Rome. It was never published, but existence of the Codex was known to the early mycologists Battarra, Paulet and possibly Micheli. Some 595 currently recognized species of macrofungi are illustrated in naturalistic form, with the 6000 folios bound in three volumes which are now deposited in the Institut de France, Paris. Two volumes of contemporary copies are deposited at the Royal Botanic Gardens, Kew. The paintings represent the finest illustrations of fungi ever attempted before the 18th century and include the first illustrations showing microscopic details of fungi.

My understanding was that Galileo demonstrated his telescope on April 14, 1611, but it was at Malvasia's estate, and not at a meeting (or a banquet) of the Linceans (although Cesi and Faber were among the 8 assembled). And I never heard about the word telescope being coined on this occasion. That would be most interesting. Do you have a reference for this? Also, I had never heard the term "Cesi codex" used for the drawings in Paris. I thought they were somehow associated with the Cassiano dal Pozzo "paper museum" at Windsor Castle. I will have to check this out. Thanks.

I received that information via email and have no specific documentation. However, from Henry King's The History of the Telescope there is this... 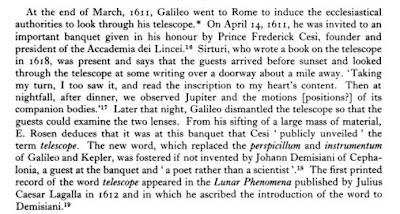 That extract from King is a good starting point. Rosen is usually pretty reliable, but I think I will check it out. The recent book, The Eye of the Lynx, by David Freedberg, which is about Galileo, Cesi, and the Lincean Academy, discusses the April 14 event at length, but does not describe it as a dinner or a Linean affair, and does not mention the telescope coinage. But that doesn't mean it didn't happen. I will look into it. Thanks for bringing the whole thing to my attention.

I will post further information when available.
Posted by Mercury at 7:02 AM