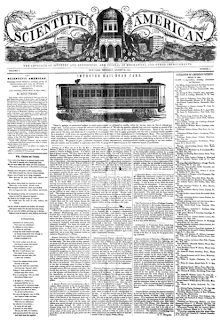 And even older than Physics World [previous post] is the first issue of Scientific American.

Scientific American is a "monthly magazine interpreting scientific developments to lay readers. It was founded in 1845 as a newspaper describing new inventions. By 1853 its circulation had reached 30,000 and it was reporting on various sciences, such as astronomy and medicine, apart from inventions. In 1921 it became a monthly. From its founding it used woodcut illustrations, and it was one of the first papers to use halftone illustrations. Its articles — solidly based on scholarly research, well written, carefully edited, and accompanied by definitions of scientific terms and by illustrations — have made it the most highly regarded magazine of its genre."

It originally styled itself "The Advocate of Industry and Enterprise" and "Journal of Mechanical and other Improvements". On the front page of the first issue was the engraving of "Improved Rail-Road Cars". The masthead had a commentary as follows:

Scientific American published every Thursday morning at No. 11 Spruce Street, New York, No. 16 State Street, Boston, and No. 2l Arcade Philadelphia, (The principal office being in New York) by Rufus Porter. Each number will be furnished with from two to five original Engravings, many of them elegant, and illustrative of New Inventions, Scientific Principles, and Curious Works; and will contain, in high addition to the most interesting news of passing events, general notices of progress of Mechanical and other Scientific Improvements; American and Foreign. Improvements and Inventions; Catalogues of American Patents; Scientific Essays, illustrative of the principles of the sciences of Mechanics, Chemistry, and Architecture: useful information and instruction in various Arts and Trades; Curious Philosophical Experiments; Miscellaneous Intelligence, Music and Poetry. This paper is especially entitled to the patronage of Mechanics and Manufactures, being the only paper in America, devoted to the interest of those classes; but is particularly useful to farmers, as it will not only appraise them of improvements in agriculture implements, But instruct them in various mechanical trades, and guard them against impositions As a family newspaper, it will convey more useful intelligence to children and young people, than five times its cost in school instruction. Another important argument in favor of this paper, is that it will be worth two dollars at the end of the year when the volume is complete, (Old volumes of the New York Mechanic, being now worth double the original cost, in cash.) Terms: The "Scientific American" will be furnished to subscribers at $2.00 per annum, - one dollar in advance, and the balance in six months. Five copies will be sent to one address six months for four dollars in advance. Any person procuring two or more subscribers, will be entitled to a commission of 25 cents each.
There is, perhaps no mechanical subject, in which improvement has advanced so rapidly, within the last ten years, as that of railroad passenger cars. Let any person contrast the awkward and uncouth cars of '35 with the superbly splendid long cars now running on several of the eastern roads, and he will find it difficult to convey to a third party, a correct idea of the vast extent of improvement. Some of the most elegant cars of this class, and which are of a capacity to accommodate from sixty to eighty passengers, and run with a steadiness hardly equalled by a steamboat in still water, are manufactured by Davenport & Bridges, at their establishment in Cambridgeport, Mass. The manufacturers have recently introduced a variety of excellent improvements in the construction of trucks, springs, and connections, which are calculated to avoid atmospheric resistance, secure safety and convenience, and contribute ease and comfort to passengers, while flying at the rate of 30 or 40 miles per hour.
First issue cover text
Posted by Mercury at 7:21 AM