Hanging on to the past...Hugh Hefner has not changed 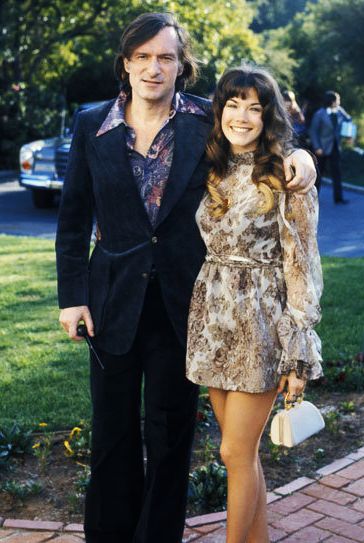 Those days are gone.

Change comes slow to the Playboy Mansion. When Hugh Hefner’s rugs wear through, “the replacements are perfect replicas," Esquire's Chris Jones reports. When Hefner plays games, he returns to classic arcade staples like Centipede and Defender. When he eats, he orders up “the same meals his mother made him when he was a boy.” When he hosts his weekly “Manly Night,” which he has done every Monday for “for as long as anybody can remember,” the movies, which play on DVD and VHS, are not in color. And when Hefner falls in love, it’s still with a twentysomething blonde.

This month, Esquire dispatched Jones to the mansion for a week to assess Playboy at 60. He found an 86-year-old Hefner wearing the same black silk pajamas and the same jaunty sailor cap, hosting the same parties and seldom leaving home to visit friends (or even his longtime secretary, Mary O’Connor, on her deathbed). But as editor-in-chief of Playboy—Hefner holds a Guinness World Record for his six-decade reign—he’s still putting his stamp on modern sexuality, not just in America, but around the world. As Hefner closes himself off in the time capsule of his ‘60s sexual revolution, Playboy the brand continues to stretch its fingers across the globe. Hefner now makes his money not from the magazine, but from “global licensing agreements” that leverage his brand “in T-shirts in the Czech Republic and a beer in Brazil, in bath products and bottled water.”
Hefner’s vision has been removed from the context-rich pages of his magazine and flattened into a bunny logo on a baby doll T-shirt. Jones laments this fact: “For sixty years, Playboy has been on the right side of history—on sex, birth control, civil rights, AIDS, gay marriage, war, social tolerance, personal liberty,” he writes. “But it wasn’t Playboy, really. It wasn’t the brand or the rabbit. It was him. It is him. And without him, it will be no more.” But if Hefner was on the right side of history in 1953, he isn’t now. After a half-century of processing, Hefner says he still doesn’t understand early feminist objections to his version of sexual revolution, in which the men wear pajamas and the women wear nothing. His latest cause is fighting ageism, a political crusade sparked by public criticism of his marriage to 26-year-old former Playmate Crystal Harris. Hefner sees ageism as “a variation of racism or sexism, all the other isms.” But flip through a Playboy, and it’s clear even his latest iteration of sexual revolution has its limits: Hef keeps getting older, and the Playmates stay the same age. Ageism may be a variation of sexism, but Hefner's magazine has never been very forward-thinking on that particular ism.

Playboy’s problem isn’t that it’s lost track of Hefner’s intellectualism in favor of bath products—it’s that Hefner’s ideals are no longer relevant. Young people today aren’t buying magazines, watching DVDs, or playing Centipede. They are also unlikely to identify with a version of sexual revolution established in 1953 and centered around the fantasy of one old, wealthy man who wears pajamas all the time. Members of the online generation don't need a guy like Hefner to present photographs of naked women, or to tell them how to process those images culturally. (Many of them, in fact, are looking for something Hefner still doesn't provide—naked men). Better that they shell out for a Playboy keychain—a nod to Hefner's old-school sexual revolution, with none of the tired intellectualizing.

Use the blog's search engine for more on Playboy and Hugh Hefner.

A clip from Playboy After Dark featuring Canned Heat...ca. 1969.