Craters on Mercury named "after famous deceased artists, musicians, or authors or other contributors to the humanities" 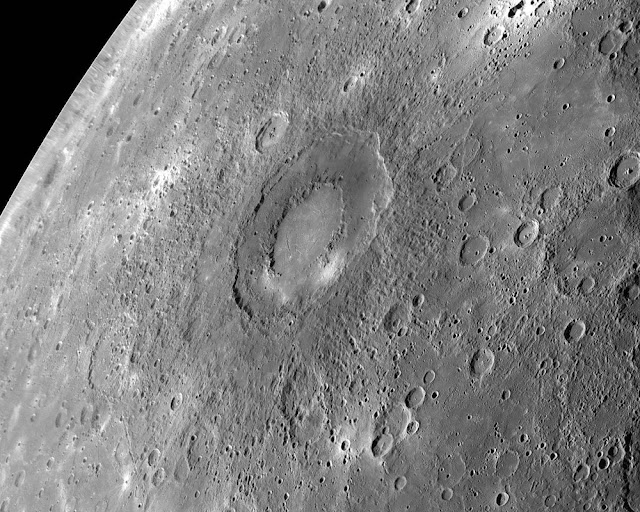 The International Astronomical Union (IAU) - the arbiter of planetary and satellite nomenclature since its inception in 1919 - recently approved a proposal from the MESSENGER Science Team to assign names to nine impact craters on Mercury. In keeping with the established naming theme for craters on Mercury, all of the newly designated features are named after famous deceased artists, musicians, or authors or other contributors to the humanities.

The newly named craters are:

* Alver, for Betti Alver (1906-1989), an Estonian writer who rose to prominence in the 1930s, toward the end of Estonian independence and on the eve of World War II. She published her first novel, Mistress in the Wind, in 1927. She also wrote several short stories, poetry, and translations.

* Donelaitis, for Kristijonas Donelaitis (1714-1780), a Lutheran pastor who was considered one of the greatest Lithuanian poets. He is best known for The Seasons, considered the first classic Lithuanian poem. It depicts the everyday life of Lithuanian peasants. His other works include six fables and a tale in verse.

* Flaiano, for Ennio Flaiano (1910-1972), an Italian screenwriter, playwright, novelist, journalist, and drama critic especially noted for his social satires. He became a leading figure of the Italian motion-picture industry after World War II, collaborating with writer Tullio Pinelli on the early films of writer and director Federico Fellini.

* Hurley, for James Francis "Frank" Hurley (1885-1962), an Australian photographer and adventurer. He participated in several expeditions to Antarctica and served as an official photographer with Australian Imperial Forces during both world wars. The troops called him "the mad photographer," because he took considerable risks to obtain photographs.

* L'Engle, for Madeleine L'Engle (1918-2007), an American writer best known for young-adult fiction, particularly the award-winning A Wrinkle in Time and its sequels: A Wind in the Door, A Swiftly Tilting Planet, Many Waters, and An Acceptable Time. Her works reflect both her Christian faith and her strong interest in modern science.

* Lovecraft, for Howard Phillips Lovecraft (1890-1937), an American author of horror, fantasy, and science fiction regarded as one of the most influential horror writers of the 20th Century. He popularized "cosmic horror," the notion that some concepts, entities, or experiences are barely comprehensible to human minds, and those who delve into such topics risk their sanity.

* Petofi, for Sandor Petofi (1823-1849), a Hungarian poet and liberal revolutionary. He wrote the Nemzeti dal (National Poem), which is said to have inspired the Hungarian Revolution of 1848 that grew into a war for independence from the Austrian Empire.

* Pahinui, for Charles Phillip Kahahawai "Gabby" Pahinui, (1921-1980), a Hawaiian guitar player considered to be one of the most influential slack-key guitar players in the world. His music was a key part of the "Hawaiian Renaissance," a resurgence of interest in traditional Hawaiian culture during the 1970s.

* Roerich, for Nicholas Roerich (1874-1947), a Russian painter and philosopher who initiated the modern movement for the defense of cultural objects. His most notable achievement was the Roerich Pact of 1935, an international treaty signed by India, the Baltic states, and 22 nations of the Americas (including the United States), affirming that monuments, museums, scientific, artistic, educational, and cultural institutions and their personnel are to be considered neutral in times of war unless put to military use.

Ray Espiritu, a mission operations engineer on the MESSENGER team, submitted Pahinui's name for consideration. "I wanted to honor the place where I grew up and still call home even after many years away," he says. "The Pahinui crater contains a possible volcanic vent, and its name may inspire other scientists as they investigate the volcanic processes that helped to create Mercury, just as investigation of Hawaiian volcanoes helps us understand the volcanic processes that shape the Earth we know today."

"We are delighted that the IAU has once again assigned formal names to a new set of craters on Mercury," adds MESSENGER Principal Investigator Sean Solomon of Columbia University's Lamont-Doherty Earth Observatory. "These names will make it easier to discuss these features in the scientific literature, and they provide a fresh opportunity to honor individuals who have contributed to the cultural richness of our planet."

More information about the names of features on Mercury and the other objects in the Solar System can be found at the U.S. Geological Survey's Planetary Nomenclature Web site: http://planetarynames.wr.usgs.gov/index.html .

MESSENGER (MErcury Surface, Space ENvironment, GEochemistry, and Ranging) is a NASA-sponsored scientific investigation of the planet Mercury and the first space mission designed to orbit the planet and entered orbit about Mercury on March 17, 2011 (March 18, 2011 UTC), to begin a yearlong study of its target planet. MESSENGER's extended mission began on March 18, 2012, and ended one year later. A possible second extended mission is currently under evaluation by NASA. Dr. Sean C. Solomon, the Director of Columbia University's Lamont-Doherty Earth Observatory, leads the mission as Principal Investigator. The Johns Hopkins University Applied Physics Laboratory built and operates the MESSENGER spacecraft and manages this Discovery-class mission for NASA.
Posted by Mercury at 11:48 AM