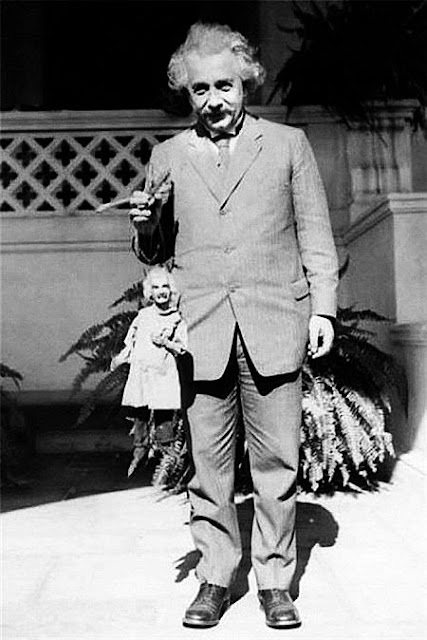 Attributed to Harry Burnett while Yale Puppeteers were working in their theater, Teatro Torito, on Olvera Street in Los Angeles, California, circa 1931. The photo was taken by Harry Burnett at Cal Tech in Pasadena where Albert Einstein was teaching. Einstein saw the puppet perform at the Teato Torito and was quite amused. He reached into his jacket’s breast pocket, pulled out a letter and crumpled it up. Speaking in German, he said, “The puppet wasn’t fat enough!” He laughed and stuffed the crumpled letter up under the smock to give the puppet a fatter belly. This is a wonderful photograph that Harry treasured. Harry Burnett also kept the letter in a frame and loved to retell the story and at the end give his pixish laugh.

[Yes, I know the difference between a puppet and a  marionette.]

Happy birthday Albert.
Posted by Mercury at 6:42 AM