Rich history of the Paris Observatory 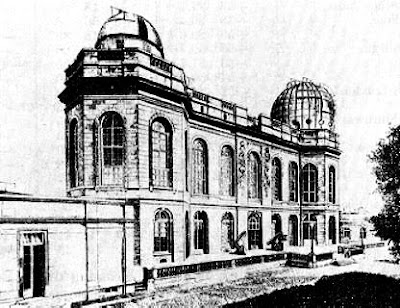 I was reading some issues of Scientific American Supplements from the 1890s and found the following. It must have been damn cold in the Winter sitting in a wooden chair peering through the ocular. 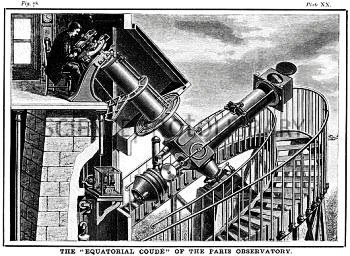 THE GREAT EQUATORIAL OF THE PARIS OBSERVATORY.

The great instrument which has just completed the installation of our national observatory is constructed upon the same principle as the elbowed equatorial, 11 in. in diameter, established in 1882, according to the ingenious arrangement devised as long ago as 1872, by Mr. Loewy, assistant director of the Paris Observatory.

We shall here recall the fact that the elbowed equatorial consists of two parts joined at right angles. One of these is directed according to the axis of the world, and is capable of revolving around its own axis, and the other, which is at right angles to it, is capable of describing around the first a plane representing the celestial equator. At the apex of the right angle there is a plane mirror of silvered glass inclined at an angle of 45 deg. with respect to the optical axis, and which sends toward the ocular the image coming from the objective and already reflected by another and similar plane mirror. The objective and this second mirror (which is inclined at an angle of 45 deg.) are placed at the extremity of the external part of the tube, and form part of a cube, movable around the axis of the instrument at right angles with the axis of the world. The diagram in Fig. 3 will allow the course of a luminous ray coming from space to be easily understood. The image of the star, A, toward which the instrument is directed, traverses the objective, B C, is reflected first from the mirror, B D, and next from the central mirror, E F, and finally reaches O, at the ocular where the observer is stationed. 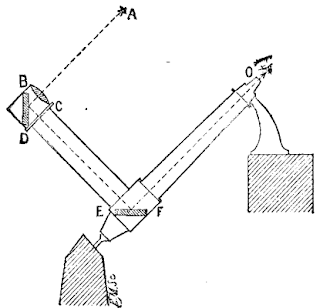 This new equatorial differs from the first model by its much larger dimensions and its extremely remarkable mechanical improvements. The optical part, which is admirably elaborated, consists of a large astronomical objective 24 in. in diameter, and of a photographic objective of the same aperture, capable of being substituted, one for the other, according to the nature of the work that it is desired to accomplish by the aid of this colossal telescope, the total length of which is 59 ft. The two plane mirrors which complete the optical system have, respectively, diameters of 34 in. and 29 in. These two magnificent objectives and the two mirrors were constructed by the Brothers Henry, whose double reputation as astronomers and opticians is so universally established. The mechanical part is the successful work of Mr. Gautier, who has looked after every detail with the greatest care, and has thus realized a true chef d'oeuvre. The colossal instrument, the total weight of which is 26,400 lb., is maneuvered by hand with the greatest ease. A clockwork movement, due to the same able manufacturer, is capable, besides, of moving the instrument with all the precision desirable, and of permitting it to follow the stars in their travel across the heavens. A star appearing in the horizon can thus be observed from its rising to its setting. The astronomer, his eye at the ocular, is always conveniently seated at the same place, observing the distant worlds, rendered immovable, so to speak, in the field of the instrument. For stars which, like the moon and the planets, have a course different from the diurnal motion, it is possible to modify the running of the clockwork, so that they can thus be as easily followed as in the preceding case. Fig. 1 gives a general view of the new installation, for which it became necessary to build a special edifice 65 ft. in height on the ground south of the observatory bordering on the Arago Boulevard. A large movable structure serves for covering the external part of the instrument. This structure rests on rails, upon which it slides toward the south when it is desired to make observations. It will be seen from the figure how the principal axis of the instrument rests upon the two masonry pillars, one of which is 49 ft. and the other 13 ft. in height. 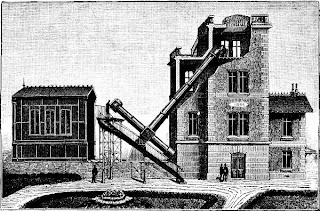 The total cost of the pavilion, rolling structure, and instrument (including the two objectives) will amount to about $80,000 after the new equatorial has been provided with the scientific apparatus that necessarily have to accompany it for the various and numerous applications to which the use of it will give rise. 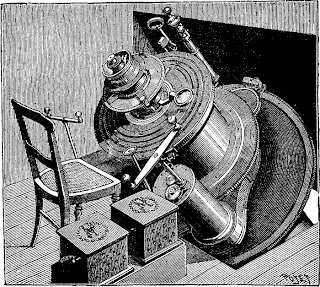 Fig. 2 shows us the room in the observatory in which the astronomer, seated in his chair, is completely protected against the inclemencies of the weather. Here, with his eye applied to the ocular, he can, without changing position (owing to all the handles that act at his will upon the many transmissions necessary for the maneuvering), direct his instrument unaided toward every point of the heavens with wonderful sureness and precision. The observer has before him on the same plane two divided circles, one of which gives the right ascensions and the other the declinations, and which he consults at each observation for the exact orientation of the equatorial.

All the readings are done by the aid of electric lamps of very small dimensions, supplied by accumulators, and which are lighted at will. Each of these lamps is of one candle power; two of them are designed for the reading of the two circles of right ascension and of declination; a third serves for the reading of the position circle of the micrometer; two others are employed for the reading of the drums fixed upon the micrometric screws; four others serve for rendering the spider threads of the reticule brilliant upon a black ground; and still another serves for illuminating the field of the instrument where the same threads remain black upon a luminous ground. The currents that supply these lamps are brought over two different circuits, in which are interposed rheostats that permit of graduating the intensity of the light at will.

Since the installation of the first model of an elbowed equatorial of 11 in. aperture, in 1882, at the Paris Observatory, the numerous and indisputable advantages of this sort of instrument have led a certain number of observatories to have similar, but larger, instruments constructed. In France, the observatories of Alger, Besancon, and Lyons have telescopes of this kind, the objectives of which have diameters of from 12 in. to 13 in., and which have been used for several years past in equatorial observations of all kinds. The Vienna Observatory has for the last two years been using an instrument of this kind whose objective has an aperture of 15 inches. Another equatorial of the same kind, of 16 in. aperture, is now in course of construction for the Nice Observatory, where it will be especially employed as a seeker of exceptional power—a role to which this kind of instrument lends itself admirably. The optical part of all these instruments was furnished by the Messrs. Henry, and the mechanical part by Mr. Gautier.

The largest elbowed equatorial is, therefore, that of the Paris Observatory. Its optical power, moreover, corresponds perfectly to its huge dimensions. The experimental observations which have already been made with it fully justify the hopes that we had a right to found upon the professional skill of the eminent artists to whom we owe this colossal instrument. The images of the stars were given with the greatest sharpness, and it was possible to study the details of the surface of the moon and other planets, and several star clusters, in all their peculiarities, in the most remarkable manner.

When it shall become possible to make use of this equatorial for celestial photography, there is no doubt that we shall obtain the most important results. As regards the moon, in particular, the photographing of which has already made so great progress, its direct image at the focus of the large 24 in. photographic objective will have a diameter of 11 in., and, being magnified, will be capable of giving images of more than 3 ft. in diameter.—La Nature.

Its foundation lies in the ambitions of Jean-Baptiste Colbert to extend France's maritime power and international trade in the 17th century. Louis XIV promoted its construction starting in 1667,being completed in 1671. It thus predates the Royal Greenwich Observatory in England which was founded in 1675. The architect of the Paris Observatory was Claude Perrault whose brother, Charles, was secretary to Colbert and superintendent of public works. Optical instruments were supplied by Giuseppe Campani. The buildings were extended in 1730, 1810, 1834, 1850, and 1951.The last extension incorporates the spectacular Meridian Room designed by Jean Prouvé.

The world's first national almanac, the Connaissance des temps was published by the observatory in 1679, using eclipses in Jupiter's satellites to aid sea-farers in establishing longitude. In 1863, the observatory published the first modern weather maps. In 1882, a 33 cm astrographic lens was constructed, an instrument that catalysed what proved to be the over-ambitious, international Carte du Ciel project.[citation needed]

In November 1913, the Paris Observatory, using the Eiffel Tower as an antenna, exchanged sustained wireless (radio) signals with the United States Naval Observatory to determine the exact difference of longitude between the two institutions.

And Raymonde Barthalot wrote the following...

THE STORY OF PARIS OBSERVATORY
Posted by Mercury at 4:01 PM