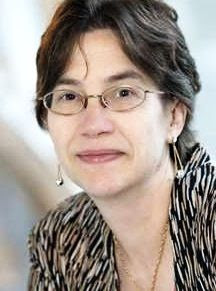 The Standard Model of Physics
has four forces in it:
the Strong, the Weak, Gravity
and the Electromagnetic.
But I’ve discovered a new force
that rules from high above.
Let me propose to you
a Unified Theory of Love!

Gluons are Strong!
The make a quantum-chromo glue
binding quarks into atoms
like I am bound to you.

Z’s and W’s are Weak!
They make particles decay
and atoms radioactive
that’s how I feel when your away.

Photons mediate E&M -
both particle and wave - they’re so
yin-yang!

Gravitons attract
both mass and energy
they make the world go round and round
that’s what you do to me.

And so I’m searching for the boson
that mediates the force of Love!
But you can’t measure it!
You can only feel it!

Pulling on the superstrings of your heart!
We should add it to the Standard Model Chart
the force that rules from high above
in a Unified Field Theory of Love!

Lynda Williams has been creating the Okal Rel Universe through three degrees and at least as many careers. Now the books of the ten novel saga are rolling out from Edge Science Fiction and Fantasy one a year (Part 7: Healer's Sword forthcoming in Nov 2011). Works by both Lynda and other writers captivated by the story-potential of the ORU, are published by Edge's sister-press called Absolute X-Press. Lynda taught and worked in educational innovation at the University of Northern B.C. for fifteen years, and now works as Learning Management System Analyst for SFU. She holds two masters degrees (M.L.S. and M.Sc. Computation) and a B.A. in Liberal Studies with emphasis in Chemistry and Creative Writing. "All my life," Lynda explains her eclectic education and life experience, "I had questions that no single discipline could answer without help from others."

Fully-realized characters living the drama and humor of culture clash surrounding power, sexual mores and social values are the hallmark of the Okal Rel experience: dramatizing questions about what it means to be human. Enthusiastic readers range from precocious pre-teens to senior citizens, and include thinking people from PhDs to high school dropouts. The gentle, beautiful, vanilla-scented Amel Dem'Vrel, title character of Part 1: The Courtesan Prince, provides a focus for the series as his life plays out the age-old story of the prince raised as a pauper combined with the notion of the prostitute with a heart of gold, despite being male. But Amel's slow recovery from a traumatic youth and rise to power as his people's leader is only the backdrop for the lives and passions of a cast of characters who seize the stage for as long as a book (e.g. Horth Nersal in Part 2: Righteous Anger) or weave their own bright threads through the ten-novel saga (e.g. reluctant rebel Perry D'Aur, the intense and brooding Di Mon, or trickster, warrior, poet Eler Nersal). 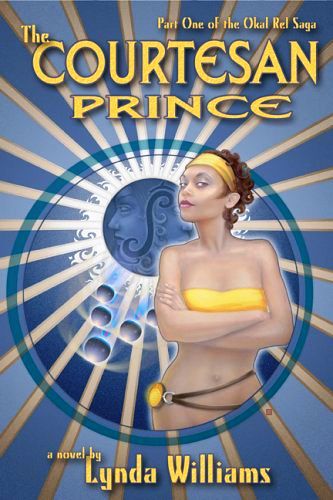 The Courtesan Prince: Part One of the Okal Rel Saga

In this volume: When Earth's first attempt to conquer the far reaches of space was thwarted by the failure of a faster than light transportation system, the first colonists were abandoned.

Subsequent colonizations were successful but ideological differences in cloning caused renegade scientists to sever their contact with Earth and establish their own unique world.

Now, thousands of years in the future, the scattered descendents of humanity have evolved into two distinct planetary societies: the Reetions of Rire, who rely on advanced computer technology to regulate every aspect of their lives, and the genetically superior and honor bound Sevolites, of Gelion.
Posted by Mercury at 2:38 PM