Arthur C. Clarke and the Internet 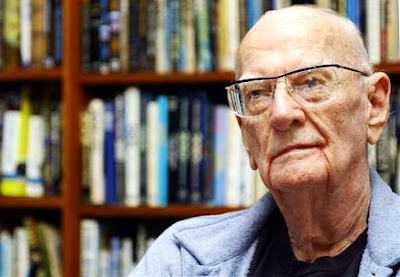 The year is 1974, and Arthur C. Clarke is standing inside one of those cavernous computer centers that held the massive machines of the day.

He’s joined by an Australian television reporter with a gloriously enormous set of sideburns, and the reporter has brought his son, who’s about 5 or 6 years old. As those massive machines hum in the background, the reporter looks down at his son and asks Clarke what the boy’s life will be like in, yes, the year 2001.

Clarke — the science fiction writer who teamed with filmmaker Stanley Kubrick to give the world 2001: A Space Odyssey — is up to the task. And then some. He says the boy will grow up to find the internet.

He doesn’t call it the internet. But he says that even before the dawn of the twenty-first century, the boy’s home will include a computer console — something much smaller than those massive machines humming in the background in 1974 — that provides “all the information he needs for his everyday life: his bank statements, his theater reservations, all the information you need over the course of living in a complex modern society.”

The boy, Clarke says, will take this console for granted, much like the telephone.

Clarke’s prediction originally aired on Australian television as part of a science series called Perspective, and you can see it in the video below. The interview happened a good 20 years before the internet went mainstream, but Clarke’s vision is pretty much on the money.

The reporter also asks the famed futurist whether we’ll become overly dependent on our computers, and though Clarke acknowledges there are some dangers here, he says our machines will also provide a new kind of freedom.

“They will make it possible to live really anywhere we like. Any businessman, any executive, could live almost anywhere on Earth and still do his business through a device like this,” he says. “It means we won’t be stuck in cities. We’ll live out in the country or wherever we please and still carry on complete interactions with other human beings as well as computers.” Our cities haven’t exactly shrunk. But we’re certainly able to connect with each other from wherever we might be.

Looked at today, the interview is particularly powerful because it takes place amidst those enormous computers of the mid-1970s. We see spinning tape drives and punch-card readers and cabinet-sized printers — equipment that’s such a far cry from the home consoles of the future that Clarke describes.

Arthur C. Clarke [Wikipedia]
Posted by Mercury at 11:03 AM