Carrie Fisher out of mothballs and ready for a sequel 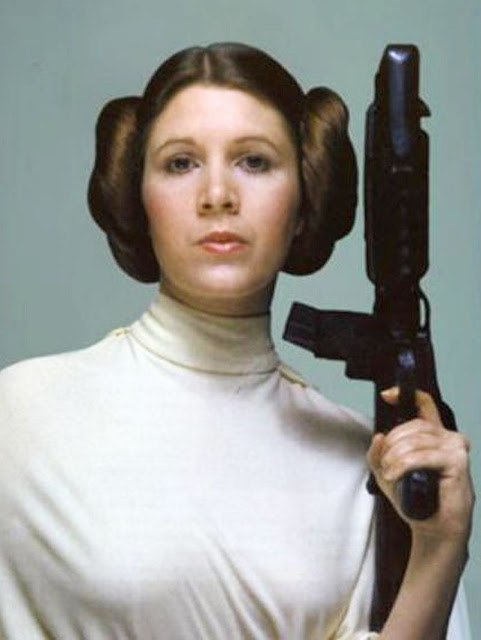 More than four decades after first playing Princess Leia, actor says she will be returning for the seventh film in the blockbuster series

Carrie Fisher has said she will reprise her role as Princess Leia in the new series of Star Wars films being planned by Disney, according to the Hollywood Reporter.

Fisher, Mark Hamill (Luke Skywalker), and Harrison Ford (Han Solo), have all been tipped to return to the long-running space opera ever since the studio announced its $4.05bn (£2.7bn) purchase of all rights from creator George Lucas in October. However, the writer, actor and comic's comments in an interview with Palm Beach Illustrated are the first indication she is confirmed to star. Asked if she would be returning to the saga, Fisher replied simply: "Yes". She then joked that Leia would these days reside in "an intergalactic old folks' home", adding: "I just think she would be just like she was before, only slower and less inclined to be up for the big battle."

However, the actor's comments have since been described as "a joke" by her representative, who said; "Nothing has been announced."
Fisher becomes the first member of the iconic trio of actors who headlined the first three Star Wars films between 1977 and 1983 to claim involvement in Star Wars: Episode VII and its successors. The new movie is being directed by Star Trek's JJ Abrams and is written by Toy Story 3's Michael Arndt. Hamill recently said he had discussed returning to play Luke with Lucas, while Ford has been heavily tipped to return despite keeping tight-lipped on the subject.

Fisher, who was just 19 when she began filming 1977's debut Star Wars movie, joked in November that she would love to marry Harrison Ford's Han Solo but was not sure the relationship would last. "I like the idea of being Mrs Solo, and we've just fought and fought and I killed him – but I'm sorry," she told host Aisha Tyler on US TV show The Chat. "I probably had an affair with some general."

Fisher went through a well-publicised period of addiction during the late 70s and has admitted taking cocaine of the set of 1980's The Empire Strikes Back. She documented her experiences in the semi-autobiographical novel Postcards from the Edge, which was made into an Oscar-nominated film in 1990. The actor revived her career in the late 80s with comedies such as The Burbs and When Harry Met Sally, but has since worked mostly as a comedian and Hollywood script editor. Her one-woman play Wishful Drinking ran on Broadway in 2009 and she has voiced the character Angela in TV comedy Family Guy.

Disney confirmed last month that it will make a number of spinoff films to sit alongside its previously announced sequel trilogy. Rumours have suggested some could be set within the timeline of the original trilogy and feature characters such as Yoda, Solo, Darth Vader and bounty hunter Boba Fett.
Posted by Mercury at 11:39 AM