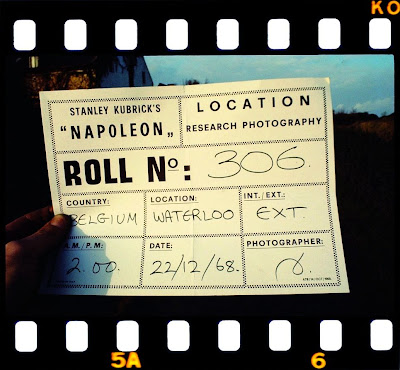 "The Amazing Story Behind Kubrick’s Napoleon"

After taking on the towering figure of Abraham Lincoln, Steven Spielberg has announced that he is moving on to an equally extraordinary historical personage: Napoleon Bonaparte. Spielberg reportedly plans to produce a miniseries out of a lavish script written by Stanley Kubrick, which the late director completed in 1969 following his 2001: A Space Odyssey.

The story behind the original failed project is fascinating. Kubrick’s Napoleon got as far as the script—which he was apparently unsatisfied with—as well as production and budget notes, before he turned his attention to adaptating Anthony Burgess’ A Clockwork Orange in 1970. During a private screening of that film with the director in 1971, Kubrick mentioned his plans to bring Napoleon to the screen, and Burgess suggested that Beethoven’s third symphony would work well as a template for its structure and musical accompaniment. Kubrick promptly sent him away to work that idea into a novel that could then be turned into a movie; recently discovered correspondence between the two details the progress of their collaboration.

Burgess sent the first half of the Napoleon Symphony manuscript to Kubrick in June 1972, but the problems created by the symphony’s structure—the second of four movements is a funeral march, which would mean that Napoleon would have to be killed off and then somehow resurrected in the final two movements—did not sit well with the director. According to The Telegraph, Kubrick politely turned the novelist down, explaining that he felt he “had reordered the chronology of events to the detriment of the story, that the dialogue lacked realism, and that Burgess’s comic vision of Napoleon fell short of his heroic stature.” (Burgess would eventually finish the highly experimental book on his own and dedicate it in part to Kubrick.)

While Kubrick’s Napoleon project never came to fruition during his lifetime, what is purported to be his original script is available in full  online —and in 2011, Stanley Kubrick’s Napoleon: The Greatest Movie Never Made was published, a book that incorporates his extensive research and source documents for the proposed film. Those who have read the script in full have reported that it is an incredibly ambitious film with plenty of potential had Kubrick been able to get the film off the ground.

“By far the biggest strength of Kubrick's Napoleon script is the maximum clarity with which it handles this most complex subject,” IGN noted in 2000, shortly after the script surfaced on the web. “A story that could have been nothing but a mess of dates, places, and battles is instead vividly rendered in epic terms and precise details.” And writer J.S. Bernstein has pointed to the themes familiar to other films in Kubrick’s oeuvre, most notably the use of voice-over narration (as seen in A Clockwork Orange) and Napoleon’s close relationship with his mother and teddy bear (as in A.I.: Artificial Intelligence).

In 2000, IGN suggested that Spielberg would be the wrong person to helm the project, noting that in contrast to A.I., which Spielberg developed from another long-stalled Kubrick project, the director was never actually involved with Napoleon prior to Kubrick’s death. While that may be true, perhaps we derive our faith in Spielberg from a project he did on his own the same year as A.I.: The miniseries Band of Brothers showed that Spielberg could do excellent work in that genre—and the expanded format does seem best for Kubrick’s grand vision, as well as Napoleon’s grandiose life.


Stanley Kubrick...astounding film director
Posted by Mercury at 5:59 AM