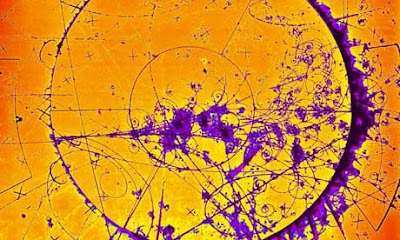 "Neutrinos still faster than light in latest version of experiment"

guardian.co.uk
The scientists who appeared to have found in September that certain subatomic particles can travel faster than light have ruled out one potential source of error in their measurements after completing a second, fine-tuned version of their experiment.

Their results, posted on the ArXiv preprint server on Friday morning and submitted for peer review in the Journal of High Energy Physics, confirmed earlier measurements that neutrinos, sent through the ground from Cern near Geneva to the Gran Sasso lab in Italy 450 miles (720km) away seemed to travel faster than light.

The finding that neutrinos might break one of the most fundamental laws of physics sent scientists into a frenzy when it was first reported in September. Not only because it appeared to go against Albert Einstein's theory of special relativity but, if correct, the finding opened up the troubling possibility of being able to send information back in time, blurring the line between past and present and wreaking havoc with the fundamental principle of cause and effect.

The physicist and TV presenter Professor Jim Al-Khalili of the University of Surrey expressed the incredulity of many in the field when he said that if the findings "prove to be correct and neutrinos have broken the speed of light, I will eat my boxer shorts on live TV".

In their original experiment scientists fired beams of neutrinos from Cern to the Gran Sasso lab and the neutrinos seemed to arrive sixty billionths of a second earlier than they should if travelling at the speed of light in a vacuum.

One potential source of error pointed out by other scientists was that the pulses of neutrinos sent by Cern were relatively long, around 10 microseconds each, so measuring the exact arrival time of the particles at Gran Sasso could have relatively large errors. To account for this potential problem in the latest version of the test, the beams sent by Cern were thousands of times shorter – around three nanoseconds – with large gaps of 524 nanoseconds between them. This allowed scientists to time the arrival of the neutrinos at Gran Sasso with greater accuracy.

Writing on his blog when the fine-tuned experiment started last month, Matt Strassler, a theoretical physicist at Rutgers University, said the shorter pulses of neutrinos being sent from Cern to Gran Sasso would remove the need to measure the shape and duration of the beam. "It's like sending a series of loud and isolated clicks instead of a long blast on a horn," he said. "In the latter case you have to figure out exactly when the horn starts and stops, but in the former you just hear each click and then it's already over. In other words, with the short pulses you don't need to know the pulse shape, just the pulse time."

"And you also don't need to measure thousands of neutrinos in order to reproduce the pulse shape, getting the leading and trailing edges just right; you just need a small number – maybe even as few as 10 or so – to check the timing of just those few pulses for which a neutrino makes a splash in Opera."

Around 20 neutrino events have been measured at the Gran Sasso lab in the fine-tuned version of the experiment in the past few weeks, each one precisely associated with a pulse leaving Cern. The scientists concluded from the new measurements that the neutrinos still appeared to be arriving earlier than they should.

"With the new type of beam produced by Cern's accelerators we've been able to to measure with accuracy the time of flight of neutrinos one by one," said Dario Autiero of the French National Centre for Scientific Research (CNRS). "The 20 neutrinos we recorded provide comparable accuracy to the 15,000 on which our original measurement was based. In addition their analysis is simpler and less dependent on the measurement of the time structure of the proton pulses and its relation to the neutrinos' production mechanism."

In a statement released on Friday, Fernando Ferroni, president of the Italian Institute for Nuclear Physics, said: "A measurement so delicate and carrying a profound implication on physics requires an extraordinary level of scrutiny. The experiment at Opera, thanks to a specially adapted Cern beam, has made an important test of consistency of its result. The positive outcome of the test makes us more confident in the result, although a final word can only be said by analogous measurements performed elsewhere in the world."

Since the Opera (Oscillation Project with Emulsion-tRacking Apparatus) team at Gran Sasso announced its results, physicists around the world have published scores of online papers trying to explain the strange finding as either the result of a trivial mistake or evidence for new physics.

Dr Carlo Contaldi of Imperial College London suggested that different gravitational effects at Cern and Gran Sasso could have affected the clocks used to measure the neutrinos. Others have come up with ideas about new physics that modify special relativity by taking the unexpected effects of higher dimensions into account.

Despite the latest result, said Autiero, the observed faster-than-light anomaly in the neutrinos' speed from Cern to Gran Sasso needed further scrutiny and independent tests before it could be refuted or confirmed definitively. The Opera experiment will continue to take data with a new muon detector well into next year, to improve the accuracy of the results.

The search for errors is not yet over, according to Jacques Martino, director of the National Institute of Nuclear and Particle Physics at CNRS. He said that more checks would be under way in future, including ensuring that the clocks at Cern and Gran Sasso were properly synchronised, perhaps by using an optical fibre as opposed to the GPS system used at the moment.

This would remove any potential errors that might occur due to the effects of Einstein's theory of general relativity, which says that clocks tick at different rates depending on the amount of gravitational force they experience – clocks closer to the surface of the Earth tick slower than those further away.

Even a tiny discrepancy between the clocks at Cern and Gran Sasso could be at the root of the faster-than-light results seen in September.

"How Many Neutrinos Does It Take to Screw Up Einstein?"

Wired
Results from a second experiment uphold the observation that neutrinos are moving faster than the speed of light. The OPERA collaboration, which first reported the superluminal neutrinos in September, has rerun the experiment and detected 20 new neutrinos breaking Einstein’s theoretical limit.

The findings are heartening to anyone hoping to see a major physics revolution in their lifetime. But scientists, as ever, are being cautious, and it will take an independent replication of the results by another team to even begin convincing many of them.

“This eliminates one major class of systematic errors, and it’s impressive for the OPERA team to have mounted in a short period of time,” said physicist Robert Plunkett of Fermilab National Laboratory in Batavia, Illinois. “However, it doesn’t mean that there isn’t an error somewhere else in their system.”

Neutrinos are subatomic particles with hardly any mass that are able to fly through most matter as if it weren’t there. Despite their negligible mass, if they were somehow able to exceed the speed-of-light limit set by Einstein’s theory of special relativity, it would present a major head-scratcher to modern physicists.

The OPERA team’s detector at Gran Sasso National Laboratory in Italy had previously detected neutrinos produced in bunches at CERN arriving 60 nanoseconds earlier than light speed would allow. The tricky part is that these bunches took a good length of time to produce — much longer than 60 nanoseconds — so the researchers had to be careful with their analysis. If they thought a neutrino was coming from the start of the bunch when it was actually coming from the end, then that neutrino would not actually be moving faster than light.

In their first experiment, the OPERA team used statistical analysis to show this situation was unlikely, but other scientists were not completely persuaded. The new experiment produced neutrinos in bunches over just three nanoseconds, far shorter than the faster-than-light anomaly. The results were the same: Neutrinos arrived 60 nanoseconds quicker than the speed of light. The findings were robust enough that members of the OPERA collaboration who had refused to sign on to the first paper were now willing to put their name on the new one.

But a great deal of scrutiny remains.

“I can now say that the probability of the result being correct has increased from 1 in a million to one in 100 thousand,” wrote physicist Philip Gibbs on the viXra log (though he stressed that those numbers were merely illustrative and not actual calculated values).

Tommaso Dorigo, a physicist at CERN, noted on his blog that there are still other possible sources of error. For instance, the OPERA collaboration’s clock might not have a fine enough resolution to determine exactly when the neutrinos arrived. “The measurement therefore is only a ‘partial’ confirmation of the earlier result: It is consistent with it, but could be just as wrong as the other,” he wrote.

Ultimately, the only thing that would convince many in the field is if another team upholds the findings in an independent experiment. Plunkett, co-spokesperson for the Main Injector Neutrino Oscillation Search (MINOS) experiment at Fermilab, says that his collaboration expects to have results checking the OPERA findings in the spring of 2012.
Posted by Mercury at 6:39 AM

Email ThisBlogThis!Share to TwitterShare to FacebookShare to Pinterest
Labels: neutrinios, speed of light