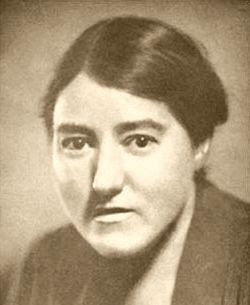 CBC News
A British woman who used her knowledge of simple chemistry to catch German spies during World War I is being recognized by the Royal Society of Chemistry ahead of Remembrance Day, or Armistice Day as it is known in the U.K.

Mabel Beatrice Elliott, who died in 1944, uncovered secret messages written in invisible ink between the lines of letters she inspected while working as a deputy assistant censor for the British War Office.

"Although her vigilance may have prevented an invasion by the Kaiser, she was never recognized for the coup in her own lifetime," said a news release from the London-based society of chemists this week.

One of the spies who was tried with the help of evidence Elliott provided confessed before committing suicide, and two accomplices were convicted. However, Elliott's role remained largely unknown because she gave that evidence under the false name Maud Phillips.

The society uncovered Elliott's story recently while working on its archives. That's because following the war, she worked for 15 years for the Royal Society of Chemistry as the indexer and business manager for The Analyst, a scientific publication for analytical chemists published by the society.

Lesley Yellowlees, who will become the Royal Society's president next year, said the story is important to chemists in part because science rarely gains the recognition it deserves for its role in national defence. She added that not only soldiers but average citizens like Elliott were involved in defending their country and that sometimes their minor scientific achievements could turn the tides of war.

Elliott's story appears in an obituary published in The Analyst in February 1944. It recounts that she was born in 1885 and educated in the U.K., at a German convent school in Holland and in Brussels, learning English, German, Dutch and French in the process.

While working at the British War Office in 1915, she became suspicious of an apparent business letter written by a man who had arrived in Liverpool from New York City. It was addressed to a "friend" in Holland.

Elliott applied heat to the letter, causing additional words, which had been written in invisible ink, to appear between the lines of the letter. They provided details about Royal Navy ships around the coast and the forces defending London.

The letter writer, 27-year-old Anton Kuepferle, was tried at the Tower of London. Before hanging himself in the midst of the trial, he wrote a confession that he was a German army officer.

Shortly after that, Elliott discovered secret messages in the letters of two other German spies, who were eventually both convicted.

When Elliott retired from the Royal Society of Chemistry, she became the only woman ever to receive an honorary membership from the association.

Lemon juice can be used to make an "invisible" ink that is clear when dried. However, a number of chemical reactions can make it possible to read words written in lemon juice.

When you apply heat to a piece of paper using a device such as an iron set on low — as Mabel Elliott did — it causes the sugars in the lemon juice to react with oxygen in the air, turning the words a dark brown colour.

Lesley Yellowlees of the Royal Society of Chemistry also recommends some other methods to uncover invisible ink. Lemon juice is acidic, so painting over invisible ink with a natural pH indicator such as the juice from boiled red cabbage will also reveal the writing. In that case, the ink turns pink because of a reaction between a pigment in the cabbage called flavin and the acid in the lemon juice.
Posted by Mercury at 2:40 PM