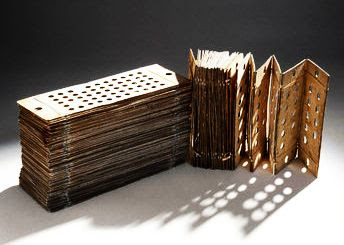 The New York Times
Researchers in Britain are about to embark on a 10-year, multimillion-dollar project to build a computer — but their goal is neither dazzling analytical power nor lightning speed.

Indeed, if they succeed, their machine will have only a tiny fraction of the computing power of today’s microprocessors. It will rely not on software and silicon but on metal gears and a primitive version of the quaint old I.B.M. punch card.

What it may do, though, is answer a question that has tantalized historians for decades: Did an eccentric mathematician named Charles Babbage conceive of the first programmable computer in the 1830s, a hundred years before the idea was put forth in its modern form by Alan Turing?

The machine on the drawing boards at the Science Museum in London is the Babbage Analytical Engine, a room-size mechanical behemoth that its inventor envisioned but never built.

The project follows the successful effort by a group at the museum to replicate a far less complicated Babbage invention: the Difference Engine No. 2, a calculating machine composed of roughly 8,000 mechanical components assembled with a watchmaker’s precision. That project was completed in 1991.

The new effort — led by John Graham-Cumming, a programmer, and Doron Swade, a former curator at the museum — has already digitized Babbage’s surviving blueprints for the Analytical Engine. But the challenges of building it are daunting.

In the case of the Difference Engine, a complete set of plans existed. The Analytical Engine, by contrast, was a work in progress, as Babbage continually refined his thinking in a series of blueprints. Thus, the hope is to “crowd-source” the analysis of what should be built; plans will be posted online next year, and the public will be invited to offer suggestions.

“There is no single set of plans that design a single machine.” said Tim Robinson, a docent at the Computer History Museum in Mountain View, Calif. “It was constantly in a state of flux.”

The project is significant in part because there has been a heated debate over whether — given time and resources — Babbage would have been able to build the machine he foresaw.

The idea was proposed last year by Mr. Graham-Cumming, who suggested a three-step project in which a decision would first be made on which blueprint to focus on, then a three-dimensional computer simulation would be created, and finally the machine would be built.

“I hope that future generations of scientists will stand before the completed Analytical Engine, think of Babbage and be inspired to work on their own 100-year leaps,” he wrote.

Babbage, who lived from 1791 to 1871, is rightfully known as the “father of computing.” But it would be left to a fellow scientist, Augusta Ada King, Countess of Lovelace, to fully appreciate that his inventions were more than just tools for automatically tabulating logarithms and trigonometric functions.

Lovelace — daughter of the poet Lord Byron — recognized that the Analytical Engine could be a more generalized media machine, capable of making music and manipulating symbols. And 113 years before John McCarthy coined the term “artificial intelligence,” she considered — and then rejected — the notion that computers might exhibit creativity or even thought.

While Babbage was driven by the desire to automate tabular data for military and related applications, Lovelace wrote a lengthy commentary on the design that would prove deeply influential when it was rediscovered in the middle of the 20th century.

Lovelace is known as the first programmer, because she designed a program for the unbuilt machine. The algorithm appears in a series of notes written by Lovelace after a friend of Babbage asked her to translate an Italian professor’s write-up of a lecture Babbage had given at the University of Turin.

The Lovelace notes are remarkable both for her algorithm for calculating the sequence known as Bernoulli numbers and for what would become known as the “Lovelace objection.” In passing, she commented that the Babbage computer would not originate anything, but rather could do only what it had been instructed. The implication was that machines would not be creative, and thus not intelligent.

The consensus of computer historians is that while Babbage was clearly the first to conceive of the flexible machine that foreshadowed the modern computer, his work was forgotten and was then conceptually recreated by Turing a century later.

In 1936, Turing wrote “On Computable Numbers,” in which he reformulated and advanced ideas first put forward by Kurt Gödel in 1931, positing the existence of what would be called “Turing machines” — an abstract computing device that was intended as an aid to exploring the limitations of what could be computed — and demonstrating that such devices could in principle perform any mathematical computation that was represented as an algorithm.

“The pioneers of electronic computing reinvented the fundamental principles largely in ignorance of the details of Babbage’s work,” said Dr. Swade, the former museum curator. “They knew of him, there was a continuity of influence, but his drawings were not the DNA of modern computing.”

He argues that Turing was a “bridging” figure between Babbage and Lovelace and the modern world of electronic computers.

A Turing biographer, Andrew Hodges, doubts that his subject had seen the Lovelace notes when he wrote “On Computable Numbers.”

“It’s most unlikely that Babbage/Lovelace had any influence on Turing in 1936,” Dr. Hodges, an Oxford mathematician, wrote in an e-mail. “Motivation, means, language, results were all completely different.”

By 1950, however, Turing clearly had come in contact with Lovelace’s work: He responded to her objection to the notion of computers’ thinking in his paper “Computing Machinery and Intelligence.” Indeed, a small element of mystery surrounds the question of when Turing did actually come in contact with Babbage’s plans.

Dr. Hodges acknowledges that no clear point in time is evident, but notes that by 1945 the Analytical Engine had come to prominence.

“Anecdotally, it has been said that Babbage’s name came up in discussions at Bletchley Park after the success of the Colossus in 1944,” Dr. Hodges wrote, in a reference to the machines developed in England during World War II to break German codes.

Moreover, although Lovelace is now renowned as the first programmer, her more significant contribution was in being the first to comprehend the significance of programmable computers. Her notes, which were signed only with her initials because at the time women were not thought to be authors, gave the reader a clear sense of the broader potential of modern computing.

It was not until the 1970s that the idea of computers as “dynamic” media machines took hold in the work of computer scientists like Alan Kay.

The leaders of the new project argue that the first conceptual leap was Lovelace’s. “The real intellectual triumph of Lovelace is overlooked by most people,” Mr. Graham-Cumming said.

As she put it, “It would be a mistake to suppose that because its results are given in the notation of a more restricted science, its processes are therefore restricted to those of that science.”
Posted by Mercury at 12:40 PM