Thoughts on those Medieval manuscripts 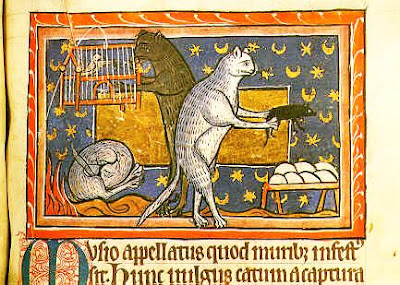 "The hands that betray the men of ideas"

The Australian
Take writing. Until quite recently, few people had the education to tackle it. Scribes existed in pre-literate societies, professionals who kept records and took dictation for long-distance communication for those who needed it and could pay. Medieval manuscripts, painstakingly written and decorated by Christian monks, were not only purposeful but were objects of beauty as well.

Counter-intuitive though it sounds, the invention of printing not even 600 years ago spread the technique of handwriting. When printed matter became cheap in western Europe, it fuelled the rise of mass society. And then, in turn, it became useful as a means of disseminating information to large numbers of people across large distances. It kept the wheels of bureaucracy turning. And as printed matter became both useful and abundant, so the skill of reading spread, and with it writing, until universal education provided an army of lowly clerks for recruitment by government and business.

Somehow, very quickly, the brain to hand connection was indelibly established. Perhaps the pen became just another tool, like a hammer or a filleting knife. The German philosopher Heidegger had a lot to say about our use of tools, how it becomes totally unconscious, the hammer an extension of the human arm. That is, until something goes wrong, the head flies off the hammer, and we think: what is this damned useless piece of wood in my hand?

But writing seems different. We don't work out how to build a table after we pick up the hammer, yet the problems we try to solve by picking up a pen become clearer when we start to write. The home loan calculation, the travel itinerary, the breakthrough in string theory ...

Typing is good. Tapping shopping lists and phone numbers straight into an iPhone is a quicker and more secure means of keeping notes than searching for pen and paper and then losing the scrap forthwith. Typing is the way I'm thinking out this story as I write it.

But I've yet to meet a journalist who doesn't keep a notepad and pen by his side at all times, for those quick notes, lists and calculations for which switching on the computer and tapping out symbols on a keyboard is mediated overkill: too slow, too cumbersome, the moment lost. That doesn't seem to be generational. An American study in 2009, long after screen-based learning was routine in schools, found that children wrote essays faster and more copiously when given pen and paper for 10 minutes than when let loose on computers for the same amount of time. And yet, and yet: South Korea recently announced that primary school education would be exclusively screen-based in future.

Apple and Microsoft's research is reaching beyond voice activation to thought activation. Perhaps we will unlearn the spontaneity of writing as quickly as we learned it. Handwriting, after all, is a means, not an end, the beauty of calligraphy notwithstanding.

Eef Overgaauw, curator of manuscripts at the State Library of Berlin, says there's nothing wrong with nostalgia, not even nostalgia for an outmoded tool.

"It's a good thing to be nostalgic about things that you appreciated in the past, things which are no longer available," he says.

"Nostalgia is a human emotion, so it is not negative as such."

On the other hand, he points out, we need to separate the medium from the message.

"The need for communication has always been very strong," he says, and refers to the very first letters that remain, very small, very short, written on papyrus among other materials, from Mesopotamia and Egypt. "Script of one kind or another is required for communication between people who are not sitting next to each other. That need was very strong 3000 years ago and it still is today. Just the media change."

Overgaauw has brought 100 manuscripts from his library to the National Library of Australia in Canberra for an exhibition catchily titled Handwritten.

A courtly Dutchman with an engaging conversational style, he admits, "you can discuss a long time in which way the medium used interferes with the message you communicate. That's very complicated." We can see, in the specimens he has brought, where that discussion might go.

The show is divided into three parts: 13 illuminated manuscripts that start with a fragment of the Aeneid dated to the ninth century; 71 handwritten letters from a dazzling array of the Western world's canonical artists, philosophers, explorers and scientists; and 16 music manuscripts, from the hand of Bach and Handel, both born in 1685, to Hindemith in the 20th century.

The early manuscripts, Overgaauw says, were chosen for a variety of reasons: for the quality of the calligraphy, say, or for the content matter, or the historical interest of their purpose and use. There are pages from Dante's Divine Comedy, the Paris Bible, the Roman de la Rose, a Psalter from the Upper Rhine, a nobleman's Book of Hours, and from the Venerable Bede's representation of mathematical sign language.

A missal from western Germany shows what we can learn from seeing these things. Missals, Overgaauw points out, were used by priests celebrating mass. The letters had to be big, so they could be read at a distance, often in candlelight or the faint daylight filtered through church windows. It had to be written on parchment, not paper, so it could stand the wear of daily use. It also had to be beautiful, symbolic as it was of Christian worship, and was often decorated with gold leaf, elaborate letters and pictorial miniatures.

The second section comes from an originally private collection of letters written by famous people. Ludwig Darmstadter, who died in 1927, was a scientist who made his fortune by patenting a technique for separating lanolin from wool and owned a chemical company. When he was 62, he donated his collection of handwritten letters to the Royal Library in Berlin, with the money for its study and upkeep, and kept adding to the collection until his death.

After some transcontinental negotiation - who would interest Australian visitors most? who may they not have heard of? - these 71 letters were agreed upon. They are a roll call of Western cultural celebrity, with an emphasis on German names not only because the collection comes from there but because of German dominance in philosophy and music. Copernicus, Kepler, Kant, Humboldt, Goethe, Grimm, Schopenhauer, Hegel, Bismarck, Marx and Nietzsche are all represented.

Non-Germans include Michelangelo, Galileo, Voltaire, Napoleon, Charles Darwin, Charles Dickens, Florence Nightingale and many more. The contents range from the highly abstruse to demands for money.

Overgaauw cautions against the dangerous pseudo-science of reading psychological traits into individual handwriting but the range of styles is fascinating. Some are fastidious, others messy with crossings out and ink spots.

On one spread of the catalogue, a letter by Bismarck faces a letter by Nietzsche. Although both lived in Germany through the second half of the 19th century, their handwriting couldn't be more different: the statesman's is strong, driven, defined by verticals; the philosopher's is softer, rounded and more tentative.

"Many people, especially those who were not very cultured, wrote in the way they learned to write at school," Overgaauw remarks. "But people like Nietzsche and Bismarck, who wrote a lot and were very skilled in writing, developed their own individual scripts."

The musical manuscripts in the exhibition are the composers' own working papers. Once finished they would have been transcribed for musicians by scribes, later printed, in multiple copies for church and court orchestras and for smaller groups.

Even in Germany, these autograph pages are rarely seen. Paper is damaged by light, warmth and humidity so, once shown, a paper object will not be put on display again for several years. In the Canberra show, pages will be turned at least once to minimise exposure. "Medieval manuscripts were made for reading by many people and parchment is very strong material," Overgaauw says. "But the paper for music manuscripts was made for the personal use of the composers."

What's more, some composers, such as Bach, skimped on quality. Overgaauw doesn't know why. Despite the many children Bach had to support, he was never poor and could have afforded better. "It was just a kind of parsimony," Overgaauw suggests.

Ink changed in quality over time too. In the early days, the writers would have made their own ink, with varying success. In the examples by Bach and Handel, the ink is very dark; in Haydn's, it's very pale - though other conditions such as paper quality and exposure over time may have affected that. By the 19th century, it was commercially available.

More fascinating on a gossipy level is that dangerous excursion into interpretation of personality: the hand of those urbane men, Haydn and Mendelssohn, is neat; a page of the turbulent Beethoven is a mess, scribbled on and crossed out, the paper damaged in parts by rough erasure.
Posted by Mercury at 7:40 AM