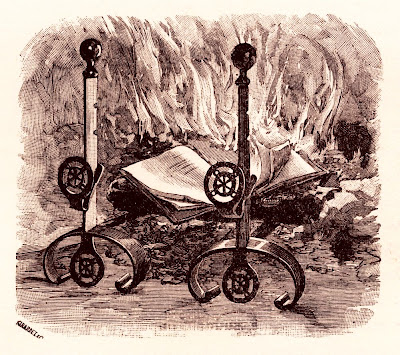 "From Alexandria to Zuccotti Park: They’ve Been Destroying Books For 2000 Years"

Huffington Post
The Book Killers have always been with us. Before recorded history they were with us, murdering the scholars and storytellers and mystics of every tribe they ever conquered.

Fahrenheit 451: The temperature at which book paper catches fire and burns.
They’re back.

But then, they’ve never gone away.

They were there when Great Library burned in Alexandria 2,000 years ago. They destroyed the library known as the House of Wisdom when the Mongol Empire invaded Baghdad in 1258. They say the invaders took the books from every ruined library in Baghdad and piled them into the Tigris River, to serve as a bridge for their soldiers and chariots.

They say the river ran black with ink for years.

In 2003 the United States invaded Iraq with an indifference, incompetence, and arrogance that led to anarchy in the streets. There was widespread rioting, vandalism, and looting of priceless ancient antiquities and manuscripts. The National Library burned, and the flames lit the skies for miles around.

Always before it had been like snuffing a candle. The police went first and adhesive-taped the victim’s mouth and bandaged him off into their glittering beetle cars, so when you arrived you found an empty house. You weren’t hurting anyone, you were hurting only things!
Now the book assassins have come to Wall Street. They removed the people and property from Zuccotti Park, destroying or damaging thousands of books in the process. Occupiers and Supporters brought the surviving books to a press conference this week. They were “torn, wrinkled, coverless and even mangled,” as Gianna Palmer reported. “Among the books visible on the table were a leather-bound copy of the Bible, a collection of Chinese mythology and a volume of selected poems by Allen Ginsberg.”

Mayor Bloomberg hasn’t apologized. In his press conference announcing the raid, he wore the same arrogant look of self-satisfaction that humanity has seen for thousands of years. It was the face of every Mongol chieftain, every Roman centurion, every officious book-destroying official that has ever lived.

Bloomberg and his compatriots would undoubtedly be horrified at any comparison to these vandals and barbarians. If Bloomberg ever does deign to apologize, which might only happen if there’s enough political pressure, he’ll undoubtedly say it was an accident.

And since things really couldn’t be hurt, since things felt nothing, and things don’t scream or whimper, as this woman might begin to scream and cry out, there was nothing to tease your conscience later.
But it was no accident. As retired Philadelphia Police Capt. Ray Lewis explained to OWS protesters, police procedure demands that receipts be provide for any personal property that is confiscated. The property must then be stored carefully. Negligence is no defense for the destruction of any property. And a society that values knowledge should be especially horrified at the destruction of books.

Bloomberg and his minions ignored police procedure. His police, aided by a private militia, disregarded property rights that are safeguarded for any suspected criminal.

But then, they knew they weren’t dealing with criminals. They were dealing with something much more threatening to their system: Independence.

You were simply cleaning up. Janitorial work, essentially ... Who’s got a match!
Rights are inalienable, which means they can’t be sold or transferred. Somebody should tell that to Bloomberg and any other politicians. It means you can’t designate a public area as “privately owned” and then retroactively suspend civil liberties there. Somebody ought to give Mayor Bloomberg a copy of the Constitution.

I’m sure the Occupiers would have been happy to lend him theirs.

Rights are also indivisible. If you discard one or two of our legal safeguards, you’ve discarded them all. Nobody gets to decide how many of our freedoms we’re allowed, when or where they may be granted or denied. That’s not freedom at all.

Books in the Occupy Library were literally treated like garbage. Their owners were finally allowed to reclaim their shredded remains - at the Sanitation Department.

But that shouldn’t be a surprise. Bloomberg and his forces were already treating the Constitution like trash and police manuals like toilet paper. Why behave any differently toward a library? After all, Bloomberg and his peers must have been furious at what they would have considered the arrogance, the impertinence, of Zuccotti Park’s residents. A library? A library is for a community!

And we decide who is a community and who isn’t, say the Book Killers.

A book is a loaded gun in the house next door. Burn it. Take the shot from the weapon. Breach man’s mind.
Even worse, books contain ideas. And information. You only have to read one or two of them to realize how transparently Mayor Bloomberg is lying—about human rights, or about the cause of the financial crisis of 2008. One of the Occupy movement’s great victories has been the unmasking of Michael Bloomberg, who until now had been the false face of a “centrist” mythology designed to hide the corruption behind today’s politico-economic dynasty.

Billionaires sometimes endow libraries, but they don’t want people creating their own. Knowledge is power, and power must be centralized. The centralization is well underway. As the book publishing industry shrinks, that power will be concentrated in the hands of fewer and larger corporations.

At this rate, the “Firemen” in Ray Bradbury’s Fahrenheit 451 will soon be obsolete. So will Bloomberg’s batallions. Soon a faceless bureaucrat or corporate lackey will be able to destroy every single copy of any “unauthorized” book - instantly, simultaneously, and permanently—with a single electronic command.

It was a pleasure to burn. It was a special pleasure to see things eaten, to see things blackened and changed.
Have you seen the video clips of the Mayor announcing his crackdown? It’s the look of a man who was, as Southern aristocrats used to say, “taking his pleasure with his social inferiors.” But some pleasures extract a high price on the soul.

In the end it doesn’t matter whether the destruction of Zuccotti Park’s library was “deliberate,” or just the byproduct of a vandal’s disrespect for the written word. Either way it showed us the values of the Bloomberg Administration. We’ve seen those values for 2,000 years.

The Book Killers. Every time they destroy a book, they destroy a piece of themselves. They can ruin the physical objects, but they can’t ruin the spirit that creates them, reads them, and shares them.

The Book Killers. In every age, they return. They come back to destroy the books, and they often succeed. But they never kill the minds, the memories, or the insights behind them. They can never kill knowledge, or passion, or justice, or wisdom. They’re always trying, but they always fail.

And in the end, that’s why they always lose.

[Richard Eskow, an Affiliate Scholar of the IEET and Senior Fellow with the Campaign for America's Future, is CEO of Health Knowledge Systems (HKS) in Los Angeles.]
Posted by Mercury at 5:29 PM