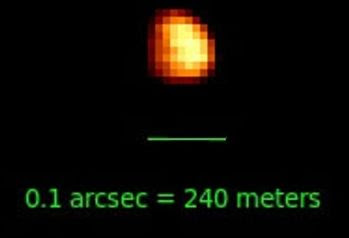 An infrared image produced by the W.M. Keck Observatory in Hawaii shows the asteroid 2005 YU55 as it receded on Nov. 8. Measurements suggest that the space rock was not as wide as originally thought.

Well-equipped amateurs captured some great shots in the visible-light spectrum. Mike Renzi combined hundreds of images from his Starhoo Observatory in Massachusetts to create this video, showing YU55 as a fast-moving dot among the stars.
Posted by Mercury at 2:20 PM