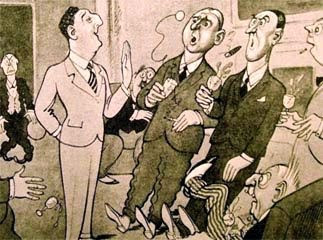 There will come a time when private, city/state/Federal support of such institutions will be severely limited or even withdrawn. Sales tax for them are difficult to pass. So I don't see why they can't charge for admission...with exceptions: Disabled, elderly, student, academic/scholars, groups. poor.

"'The man who said museums should charge for entry.'"

Art History News
Tristram Hunt has re-opened the debate on entrance fees for museums. He says that in an age of arts cuts, particularly for regional museums, it is unfair that London-based museums such as Tate get funds for free entry, but not the Potteries Museum in his own Stoke constituency. [More below]

Hunt is going firmly against Labour policy, and his willingness to debate the issue must be applauded. For too long there has been a sort of fatwa on the subject. I used to work for Hugo Swire, who, when he was Shadow Culture Secretary, was denounced by the Daily Mail, and later others, for daring to suggest that if some museums wanted to re-introduce charges, he would consider allowing them to do so.

Personally, I think free entry is a Good Thing. But if a board of independent trustees wanted to charge because they thought it would be better for their museum, why should the government stop them? The money they receive from DCMS to supposedly make up for free entry is not nearly enough. And Hunt points out that 'when it came to broadening audiences for art and culture, free entry didn't achieve that much.'

Should British taxpayers be subsidising the over 15 million overseas visitors who benefit from free entry? If the British Museum could charge even half of its 3.7m overseas visitors the same as the Louvre, 9.5 Euros, it would raise an additional £14.4m. The equivalent figure for Tate would be £12.5m, and the National Gallery almost £7m.

I'm glad that the current government is committed to free entry, with 'no ifs and no buts' as Jeremy Hunt said. But I'll continue to be puzzled by the fact that in Paris, it's free to get into Notre Dame, but not the Louvre, while in London it's free to get into the National Gallery, but not Westminster Abbey.
Posted by Mercury at 3:01 PM