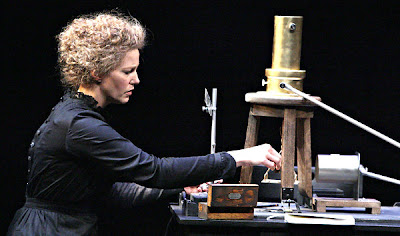 Anna Gunn stars in "Radiance," a look at the personal and professional life of Marie Curie, written by Alan Alda, at the Geffen Playhouse in Los Angeles.
Alan Alda wrote this?

"The Physics of the Laboratory, and the Chemistry of the Heart"

The New York Times
Despite much learned talk about the game-changing scientific discoveries in radioactivity it portrays, “Radiance,” a new drama by Alan Alda at the Geffen Playhouse here, doesn’t emit much in the way of theatrical light.

Certainly Mr. Alda, the amiable actor and besotted science buff, does his studious best to illuminate the challenges that Marie Curie, gracefully portrayed by Anna Gunn, faced in pursuing a career in the sciences at a time when it was virtually unheard of for women to take prominent roles in academic or public life. But his dramatization of Curie’s personal and professional trials often feels like a talking diorama in a science museum, at least until it makes a sudden leap into juicy, gaslit melodrama in the second act.

Directed by the veteran Daniel Sullivan, “Radiance” takes up Curie’s story as she and her husband, Pierre, are together making startling discoveries in their makeshift laboratory near Paris. Having previously identified a new radioactive element, which they named polonium in honor of Marie’s Polish origins, they have stumbled upon a second, which they called radium. The challenge ahead is to isolate it, and Marie’s dedication to her profession is such that she is willing to endure “freezing eyelids and bleeding fingers,” not to mention much less time with her children, to achieve her goal.

It’s never easy to create popular entertainment from the painstaking drudgery and intellectual arcana of science and chemistry. Dialogue in which Pierre (John de Lancie) announces that “radium is all bound up with barium, and we have to separate it out with fractional crystallization” doesn’t really make audiences twitch in their seats with excitement.

Mr. Alda isn’t altogether adept in the necessary matter of exposition, either, leaving Ms. Gunn to deliver a stagy monologue describing Marie’s unhappy history as a governess back in Poland. Whenever Mr. Alda finds himself needing to provide context that he cannot weave into the episodic narrative itself, the characters also turn away from the Bunsen burners and formula-covered blackboards to reveal their thoughts directly to the audience.

To stoke the drama the congenial, intellectually stimulating marriage of Marie and Pierre is contrasted with the stifling home atmosphere of their scientific colleague Paul Langevin (Dan Donohue), who admits to worshipping Marie for her beautiful brain and precise mind. His passion is not lost on his pinched wife, Jeanne (Sarah Zimmerman), who grows more spiteful and suspicious, culminating in a dark threat of violence that ends the first act on a melodramatic note.

Ms. Gunn, who appears in the cult cable television series “Breaking Bad,” gives a conscientious, committed performance in the play’s central role. She persuasively conveys Marie’s shock and humiliation at the news that the Nobel Prize committee has excluded her from the award given to her husband and others for discoveries in which she played a crucial part. (He objected and they relented, but Marie was not allowed publicly to receive the prize.)

And Ms. Gunn digs into the play’s meatier material — the sudden death of Pierre, and Marie’s subsequent, scandalous affair with Langevin — with a focused intensity that enlivens the play’s later scenes. Ms. Zimmerman and Mr. Donohue are also fine as the discontented couple whose relationship grows more antagonistic when Jeanne publicly exposes the affair, causing a public outburst of xenophobia tinged with anti-Semitism (despite Marie’s Catholic background).

All this history, and more, is dutifully forked over in digestible chunks in “Radiance,” but Mr. Alda lacks the imaginative vision to give it engrossing dramatic form. As it moves from episode to episode, the play reminded me of one of those old-school documentaries that featured stodgily dramatized scenes among the talking-head interviews with historians.

Mr. Alda’s idea to keep all the actors onstage throughout the play, seated quietly at the sides when they are not participating in the action, strikes me as a mistake too. Stiffly attentive in their chairs, trying to look properly interested in the proceedings, the actors only reinforce the impression that what we are witnessing is less a drama than an animated science seminar.

The Passion of Marie Curie