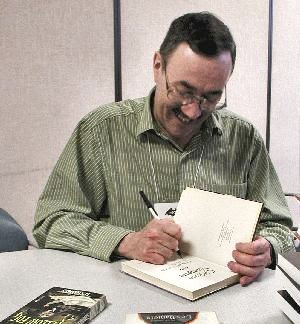 The New York Times
Les Daniels, one of the earliest historians of comic books — from the launching (off the doomed planet Krypton) of Superman in 1938 through the countercultural comix movement of the ’60s — and an author of horror novels, died on Nov. 5 at his home in Providence, R.I. He was 68.

The cause was a heart attack, said Diane Manning, his sister and only immediate survivor.

Mr. Daniels wrote 10 nonfiction books — among them histories of superheroes and of major publishers like DC and Marvel — and five works of fiction, all revolving around a globe-trotting, time-traveling vampire, Don Sebastian de Villanueva.

But he is perhaps best known, particularly among aficionados, for his 1971 book, “Comix: A History of Comic Books In America.” Starting with the days when pulp fiction fused with newspaper cartoons, Mr. Daniels documented how the golden age of comic books — pretty much starting with an infant placed on a rocket ship from Krypton to become Superman on Earth — evolved into a period of turmoil in the industry after a noted psychiatrist, Fredric Wertham, published “Seduction of the Innocent” in 1954. Focusing on the darker elements of the genre, horror and crime, Dr. Wertham saw comics as a cause of juvenile delinquency. His assertions were the subject of Senate hearings and prompted the industry to adopt a code of self-censorship.

In “Comix,” Mr. Daniels celebrated the underground movement that reacted against mainstream censorship with radical heroes like Mr. Natural, a mystic guru who bemoans the evils of the modern world, and Fritz the Cat, a sexually adventurous feline con artist. He profiled artists like Robert Crumb, the creator of those characters, and Art Spiegelman, a future Pulitzer Prize winner for his Holocaust-based “Maus,” as vital figures in the movement.

“Daniels made an important contribution documenting the history of an American art form," said Paul Levitz, a former president and publisher of DC Comics. “And this was 30 years before the Metropolitan Museum of Art began acknowledging comics as an art form.”

Mark Evanier , a comic-book writer and historian, said that before Mr. Daniels, “nobody thought to write the history of the industry,” adding that “back then, it was a sloppily run, disposable business that no one thought would exist for long.”

“He was a guy that publishers hired to come in and figure out the histories of their own companies,” Mr. Evanier continued, “and he produced major works upon which all future histories will be built.”

Besides “Comix,” Mr. Daniels’s nonfiction books include histories of Superman, Batman and Wonder Woman — the first popular female comic-book character, who appeared on the cover of the first issue of Ms. magazine. For “The Complete History: Wonder Woman” (2000), Mr. Daniels won the Eisner Award, considered the Oscar of the comics industry.

He also wrote “Living in Fear” (1975), a history of horror in the mass media in which he offered a brisk tour of the genre, from Aeschylus’ “Oresteia” to William Peter Blatty’s “Exorcist.”

Leslie Noel Daniels III was born on Oct. 27, 1943, in Danbury, Conn., to Eva and Leslie Daniels Jr., and grew up in Redding, Conn. He received bachelor’s and master’s degrees from Brown University; the subject of his master’s thesis was the horror author H. P. Lovecraft.

It all might not have happened, Mr. Daniels’s sister said, had his mother not thrown out his comic book collection when he was 9.

“Even at that age he knew to a certainty that comic books would be his career,” Ms. Manning, a child psychologist, said. “Why do moms throw out comic books? I’ve been trying to figure it out all my life.”
Posted by Mercury at 2:20 PM