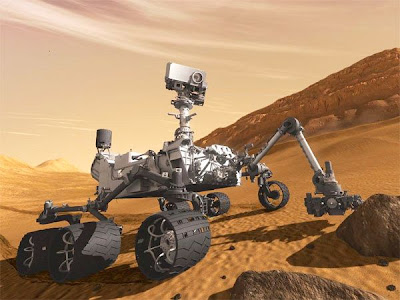 "NASA: New Mars rover will look for the ingredients of life"

Los Angeles Times
If you think that people who believe in the possibility of extraterrestrial life are kooks, you probably haven't talked to a NASA space scientist in a while.

At a news conference on Thursday, Doug McCuistion, director of the Mars program for NASA, said that when the agency's newest Mars rover blasts off for the red planet on Nov. 25, one of its charges will be to discover if the planet contains (or contained) the ingredients of life.

"This mission will bridge the gap scientifically from our understanding of the planet being warmer and wetter than we probably believed, to not seeking life itself, but seeking signs of life," he said.

He reiterated: "This is not a life-seeking mission."

Think about the mission this way: If NASA were going to Mars looking for signs of pancakes instead of signs of life, on this trip it would be looking for flour and eggs, not pancake crumbs -- and definitely not pancakes.

In an interview with The Times, Joy Crisp, deputy project scientist for the Mars Science Laboratory, said the rover will be looking for organic molecules and isotopic signatures that might indicate that life did exist at one time on Mars.

"If this step pans out, if we do find organic compounds and we think that the rocks look likely to preserve evidence of life, then we will know better what to send next," she said. "It is kind of an intermediate step."

Asfor the rover itself -- called Curiosity -- it's 6-feet-tall, weighs roughly 2,000 pounds, and is the most complex machine to be placed on another planet, according to McCuistion.

The rover has high-definition cameras, a laser eye, and a weather station to help scientists monitor the environment. It also has the ability to sample rocks and soils, and a drill that will allow it to capture material from inside rocks.

During the news conference, Vasavada was asked how likely he thought it was that Curiosity would find evidence of life on Mars.

"That would be in the realm of speculation," he said, "but the reason we are excited about Mars is that when we look into the distant past, there is evidence of rivers flowing and lakes and we are trying to find out if they are habitable environments."

"Of the hundreds of places we could have landed, we've chosen the best place to find habitable environment," he added. "Now we'll see if we find one."

The blog's search engine really sucks. It took me a long time to find the following.