Photo lab from an old fall out shelter 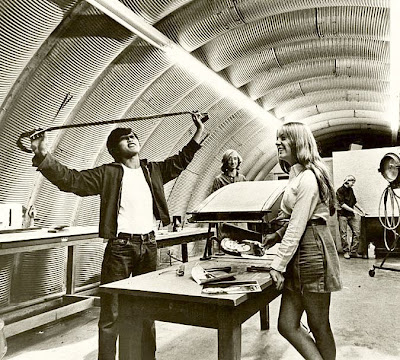 Times staff photographer John Malmin's photograph was published on May 30th, 1971.
Might as well. Old missile silos have been converted into living quarters.

In May 30, 1971, Times staff writer Eric Malnic reported on the uses of the 1960s-era fallout shelters, including this large one at the Dunn School. He wrote:

One thing about fallout shelters – they are built to last.

Which is why virtually every one of the about 4,000 private underground shelters constructed in Los Angeles County in the era of the Berlin and Cuban crises is still around….

Perhaps the most versatile shelter in Southern California is a 20-by-60-foot concrete and steel chamber built to accommodate the 85 students of a private high school in the Santa Ynez Valley.

Depending on when you step into either end of it, you may find it a visiting team’s dressing room, a photography laboratory and dark room, a storeroom, a projection room, a meditation room for the school’s occasional transcendental mediators or a dormitory for dates and their chaperons. “It used to serve as a practice room for our rock ‘n roll band,” said Bill Webb, headmaster of the Dunn School, “but we gave it up because we were afraid the boys could go deaf down there.
The Dunn School’s shelter was built by headmaster Tony Dunn, an Englishman familiar with the horrors of the World War II blitz in London. Dunn passed away in 1967, but the school kept the shelter – for other uses.
Posted by Mercury at 5:01 AM