The silents we know... 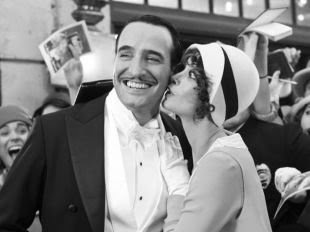 "Buzz is growing over a silent film"

France's 'The Artist,' opening this week, harks back to a time before movies had sound. It's a gamble, but modern crowds are responding.

Los Angeles Times
The clang of computer-generated robots, the whoosh of men in capes, the purr of a 3-D animated kitty — modern Hollywood blockbusters are a cacophony of sound and color. But one of the movies creating the most commotion in film circles right now is notable for a surprisingly anachronistic quality: its silence.

"The Artist," a nearly wordless black-and-white melodrama starring two French actors little known outside Europe, has emerged as an unlikely crowd-pleaser on the film festival circuit — and as an Academy Awards contender.

Set in the late 1920s and early '30s, it follows a silent film heartthrob, George Valentin (Jean Dujardin), and a chorus girl, Peppy Miller (Bérénice Bejo), who meet cute just as talkies are arriving. The new technology will transform her into a star and him into a relic, leaving him penniless, despondent and alone. Yet the two develop a tender affection.

Shot for $14.2 million in classic Hollywood locations — Mary Pickford's Hancock Park starter mansion, the Orpheum Theater in downtown L.A., the Paramount Pictures and Warner Bros. backlots — the plot of "The Artist" may be simple, its look retrograde. But bringing the film to screen required no small amount of innovation: writing and illustrating a screenplay that would appeal to actors; figuring out how to propel the story without dialogue; landing a financier for the unorthodox project; finding a way to give the film a vintage aesthetic; and now selling it to critics, general audiences and awards.

If the movie, which opens Friday, garners a best picture Oscar nomination, it will be the first silent film to do so since 1928's "The Patriot."

"It was a fantasy at the very beginning," said director Michel Hazanavicius, 44, known for his giddy French-language spy parodies, "OSS 117: Cairo, Nest of Spies" and "OSS 117: Lost in Rio." "A lot of directors have this fantasy because it's really the purest way to tell a story, just with images. The lack of sound makes room for the audience. You do the movie with me. You don't have all of this explosion and effects and shouting noises."

Hazanavicius shared his low-tech idea with Bejo, who is also his romantic partner, at what seemed to her an inauspicious moment. It was late 2009, and "Avatar," with its audacious use of high-tech filmmaking, was breaking box office records. "I was enthusiastic but I couldn't help laughing," she said. "It was very strange. You want to do a black-and-white and silent movie?!"

Around the same time, Hazanavicius was approached by producer Thomas Langmann, son of French producer and director Claude Berri. Langmann wanted Hazanavicius to direct a movie based on a popular series of French crime novels. Instead, Hazanavicius persuaded Langmann to back his silent film project by describing his vision of a few scenes and appealing to the producer's sense of adventure.

"I've always wanted to work with Michel.... Part of being a producer is taking a risk," said Langmann, 39.

"The Artist" was a financial risk — modern silent films are mostly relegated to art exhibits and film schools. The last such movie to make an impact at the box office was "Silent Movie," Mel Brooks' 1976 satire of the slapstick comedies of Charlie Chaplin and Buster Keaton, which earned $36 million.

"Finding an audience for a modern silent film will be an uphill battle," said Jan-Christopher Horak, director of the UCLA Film and Television Archive. "People are used to consuming five different pieces of media at once these days.... It is a gamble."

Langmann supplied some of the budget himself and cobbled together the rest from French studios and TV channels. Before the film debuted at Cannes Film Festival in May, Harvey Weinstein's company purchased distribution rights for the U.S. and several foreign territories, including China and Britain, for a sum in the millions (he declined to be more specific).

"For Thomas Langmann, it would have been smarter to make a $150-million Marvel comic book movie," Weinstein said. "He has to be committed to a mental institution.... If the movie doesn't work, we're all going to be at the silent lunatics home."

The unorthodox creative process of "The Artist" began with Hazanavicius' script. He deliberately kept the plot simple and the number of characters few so that audiences could follow the movie with only the help of a few dozen title cards.

Concerned that agents and actors wouldn't be interested, he prepared a lavish screenplay with black-and-white photos — a Greta Garbo film premiere, a vintage Ford trundling through Hollywoodland — and enlarged the text. "It has to read like a short novel," he said. "If you have a normal script, I thought it was a little bit not sexy."

Hazanavicius, who got his start directing for television and commercials, drew his own storyboards, determining how he would unfold his narrative with no dialogue: Peppy, in the throes of a crush, secretly tries on George's coat; George, in extreme close-up, screams at a horrible sound; a Jack Russell terrier drops to the floor and plays dead at a fingerpoint "gunshot."

To evoke the look of silent films, the director and his cinematographer, Guillaume Schiffman, adopted the format's traditional squarer frame shape and had special lenses crafted to duplicate the gauziness of vintage black-and-white film. They shot the movie at 22 frames per second, instead of the standard 24, to lend his cast's movements the slightly sped-up look of silent movie actors. (Chaplin did not actually move faster than the rest of us; silent-era movies were often shot at 18 or 16 frames per second, and seen on current, faster projectors appear accelerated.)

Hazanavicius filmed with modern cameras, but he had the vintage, hand-cranked variety on set so his cast could hear the same whir that their 1920s counterparts did. He also played music as his actors worked — Franz Waxman's "Sunset Boulevard" score for a dramatic revelation, Cole Porter for a pivotal tap dance scene. (The score actually used in the film is by Ludovic Bource, who was inspired by classic Hollywood composers like Waxman and Max Steiner.)

For the actors, the silent filmmaking process was not as different as it might seem. They spoke improvised dialogue in both French and English. "Without the dialogues, you focus on the characters and the story," Bejo said. "It's actually very easy."

"What I love about silent film [is] the fact that you as an audience, you do the dialogues, you do the voices, you imagine things, the sound of the street; that makes you really take part in the storytelling process," he said.

"A lot of people think it's very cerebral or intellectual to go see a silent movie," he added. "It's the exact opposite. It's much more sensual — sensual because it's not the same part of the brain [that] works. Usually you have the dialogues, and it says to you things, but it's information. Here it's very different. You have images and you have music and it's all about feeling and sensation."

Dujardin won best actor at Cannes, and the movie opened in October in France. It has grossed $12 million, besting such Hollywood releases as "Real Steel" and "The Three Musketeers."

To find an audience in the U.S., the movie will need an awards pedigree, which looks increasingly likely according to off-the-record comments from those in the highly competitive world of awards strategy. "The Artist" may be catnip for the Academy of Motion Picture Arts and Sciences, whose members like to reward underdogs, like 2009 best picture winner "Slumdog Millionaire," and feel-good stories like last year's winner, "The King's Speech," also a Weinstein Co. release.

Weinstein plans to open the movie in four theaters in New York and Los Angeles and slowly expand to 100 or 150 screens by Christmas. His marketing strategy, he said, is supplication.

"There's no marketing in the world other than praying," Weinstein said. "It'll be interesting to see just how far and adventurous the American public and, for that matter, the worldwide public is willing to be."

The Artist [Wikipedia]
Posted by Mercury at 3:38 PM

Email ThisBlogThis!Share to TwitterShare to FacebookShare to Pinterest
Labels: "The Artist", silent films