The Garmantes...now we may know more 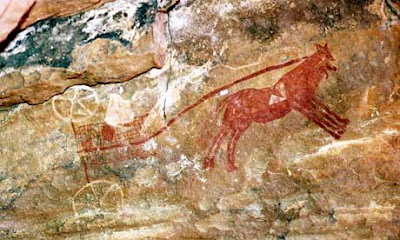 Libyan leader showed no interest in ancient culture of Garamantes, but now archaeologists hope to unearth neglected slice of history

guardian.co.uk
The late Muammar Gaddafi was fond of insisting on the links between his republic and sub-Saharan Africa. He was less interested, however, in celebrating the black African civilisation that flourished for more than 1,500 years within what are now Libya's borders, and that was barely acknowledged in the Gaddafi-era curriculum.

Now, however, researchers into the Garamantes – a "lost" Saharan civilisation that flourished long before the Islamic era – are hoping that Libya's new government can restore the warrior culture, mentioned by Herodotus in his Histories, to its rightful place in Libya's history.

For while the impressive Roman ruins at Sabratha and Leptis Magna – both world heritage sites – are rightly famous, Libya's other cultural heritage, one that coexisted with its Roman settlers, has been largely forgotten.

It has been prompted by new research – including through the use of satellite imaging – which suggests that the Garamantes built more extensively and spread their culture more widely than previously thought.

The research has confirmed the view of Herodotus –not always the most reliable of chroniclers of his world, often supplying a good yarn when hard facts were hard to come by – that the Garmantes were a "very great nation".

Inhabiting an area around the busiest of the ancient trans-Saharan crossroads, the Garamantes were settled around three parallel areas of oases known today as the Wadi al-Ajal, the Wadi ash-Shati and the Zuwila-Murzuq-Burjuj depression with its capital at Jarmah.

They were tenacious builders of underground tunnels like Gaddafi. But while Gaddafi dug down to build huge complex bunkers, the Garamantes mined fossil water with which to irrigate their crops.

The Garamantes relied heavily on labour from sub-Saharan Africa, in the shape of slaves, to underpin their civilisation. Indeed, it is believed that they traded slaves as a commodity in exchange for the luxury goods that they imported in return.

Describing the recent finds as "extraordinary" in a paper co-authored for the journal Libyan Studies, Professor David Mattingly of the University of Leicester argues that the discoveries demonstrate that substantial trade across the Sahara long pre-dated the Islamic era.

Despite the increasing awareness of the importance of Libya's long-lost civilisation, Gaddafi was not much interested in these developments.

"We know that the material we produced for the Libyans ended up on Gaddafi's desk," said Mattingly, who has spent much of the last decade researching the archaeology of the Garamantes.

"But nothing ever happened. He wasn't interested and there was no mention of the Garamantes in the Libyan school curriculum."

All this, Mattingly hopes, will change amid emerging new evidence of both the scale and importance of the Garamantes' civilisation.

Occupying an area of some 250,000 square miles, the Garamantes, whom Herodotus described colourfully as herding cattle that "grazed backwards" and hunting Ethiopians from their chariots, are now known to have practised a sophisticated form of agriculture, occupying villages set around square forts or qasrs.

The very existence of the desert culture, however, was based on their use of underground water extraction tunnels – known as foggara in Berber, one of the peoples from whom the Garamantes were descended – whose construction was highly labour-intensive, requiring the acquisition of large numbers of slaves.

The Garamantian civilisation was unique. Its foundation is believed to have marked the first time in history when a riverless area of a major desert was settled by a complex urban society which planned its towns and imported luxury goods.

Indeed the sophistication of Garamantian building design – not least of its fortifications – may have been copied by the Romans, some of whose forts in north Africa are strikingly similar in appearance.

"Our latest work using satellite technology has identified hundreds of new villages and towns. It is pretty breathtaking," said Mattingly.

"The important thing to realise is that this was an urban and sedentary agricultural culture that existed in the middle of the Sahara.

"Uncovering the extent of it is like stumbling across the network of English medieval castles today. We know that the Garamantes traded. There were caravans of hundreds of camels every year."

Mattingly believes that, if the Garamantes' place in African history was under-recorded by the ancients, despite being mentioned by both Tacitus and Pliny, it is explicable by a Romano-centric colonial view of ancient history that persisted.

And while Mattingly's research has benefited from satellite imagery commissioned by the oil industry for exploration which has become available to academics, he is concerned that as Libya opens up again after its war – to tourism, building development and oil extraction – important Garamatian sites will need to be protected.

During the Nato air war against Gaddafi, Mattingly and his fellow researchers supplied coordinates of key archaeological sites to protect them from bomb damage.

So what happened to the Garamantes? In the end, like the Easter Islanders, the Anasazi, the Greenland Norse and the Maya – all civilisations whose downfall was studied by Jared Diamond in his book Collapse – it appears the Garamantes outgrew their ability to exploit the environment around them.

In the six centuries that they thrived, the Garamantes extracted, it is estimated, in the region of 30 billion gallons of water through the foggara system of subterranean tunnels.

In about the fourth century, however, the water started to run out, and to have dug deeper and further in search of it required more slaves than the Garamantes' military power could successfully deliver.

They reached what might be called a "peak water" moment. When they had passed peak water, the Garamantes – the "very great nation" — were doomed to decline.
Posted by Mercury at 5:20 PM