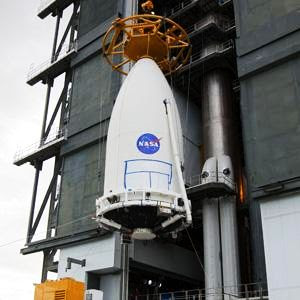 The Mars Science Laboratory, bolted inside the payload fairing of an Atlas V rocket, is hoisted into place at Launch Complex 41 at Cape Canaveral Air Force Station in Florida.
"Curiosity Rover Bound for Mars"

Voice of America
The newest of NASA's Mars rovers is set to launch from Cape Canaveral, Florida, on Saturday, November 26 and reach the Red Planet in August 2012. It's called the Mars Science Laboratory, MSL for short, or 'Curiosity' to the masses.

The Curiosity rover is the size of a car, has 17 cameras, a robotic arm, a laser and a drill, and about nine months from now, NASA expects to see it making tracks on Mars.

A team of U.S. space agency scientists selected the landing site, the foot of a mountain within a deep, roughly 150-kilometer-wide depression called Gale Crater.

The Mars Science Laboratory, bolted inside the payload fairing of an Atlas V rocket, is hoisted into place at Launch Complex 41 at Cape Canaveral Air Force Station in Florida.

Ashwin Vasavada, the MSL deputy project scientist at NASA's Jet Propulsion Laboratory in California, said "This is a Mars scientist's dream machine. We're so excited to have this rover going to Mars this year. It's going to be the virtual presence for over 200 scientists around the world to explore Mars and Gale Crater that we'll talk about. This rover is not only the most technically capable rover ever sent to another planet, but it's actually the most capable scientific explorer we've ever sent out."

That is because Curiosity is a mobile laboratory. It is much larger than NASA's previous Mars Exploration Rovers, Spirit and Opportunity, which are essentially Curiosity's little cousins.

Curiosity can travel up to about 200 meters per day over the Martian landscape. Instead of the solar panels that powered its smaller predecessors, a plutonium-fueled nuclear reactor on board will generate plenty of constant power for Curiosity's energy-demanding mission. The remote-controlled vehicle even has a laser that can survey the chemical composition of rocks.

"What really dominates the design of this rover is the fact that it has this ability to sample rocks and soils on Mars for the first time, and so it has a big six-foot [1.8 meter] robotic arm. And the rover is partly that big because it holds two very capable scientific laboratories inside the rover," said Vasavada.

Vasavada said one instrument measures the minerals in sampled rocks and soil, while another looks at chemical elements and any organic material that might be present.

The goal is to learn if Mars, and Gale Crater in particular, ever had environmental conditions that could have supported microbial life.

"This mission is really about looking for those habitable environments, and not detecting life itself," said Vasavada.

Scientists say the mountain located within Gale Crater will yield plenty of information about the planet's evolution because each layer of rock contains clues. Vasavada says Gale Crater is a very promising site for scientists searching for habitable environments. "It has some geologic evidence that water was around. We hope, in fact, to search for organics with this mission. That's another requirement for life as we know it," he said.

Curiosity's nuclear reactor should allow it to operate on the surface of Mars for about two Earth years, the equivalent of one Martian year.