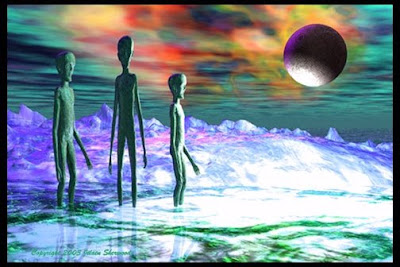 Jilaen Sherwood
That's fine...they can chase "little green men" all they want--as long as it doesn't rely on government funding. It appears that money and research could be better directed.

PhysOrg.com
SETI, (Search for Extraterrestrial Intelligence) Senior Astronomer Seth Shostak and host of the weekly radio show "Are We Alone," predicted during a recent conference in San Francisco that "We'll find ET within two-dozen years", according to CNET News staffer Daniel Terdiman.

The prediction is based on a few qualifiers. The first is the assumption made by researchers within SITI that the power, range and speed of the Allen Telescope Array with 42 radio camera dishes currently on line and a projected total of 350 dishes will evolve into new technologies capable of distances and speed unfathomable presently. Secondly, an obvious component is necessary funding for evolving technologies.

The current Allen Telescope Array , (ATA) was made possible by Paul Allen, co-founder of Microsoft making a $25-million donation to SETI. Mr Allen flipped the go- switch in 2007 for the initial 42 radio-camera dishes phase. Since that time ATA has produced amazing images, including atomic hydrogen disposition, heretofore stifled by a lack of exactitude. The completed project will include a total of 350 separate dishes and collectively may act as one virtual dish spanning 2700 miles across. Further funding for ATA is critically needed.

Jill Tarter an astronomer and Director of the Center for SETI Research refers to mankind´s search for extraterrestrial intelligence as a "Cosmic Needle-In-A-Haystack." Her work in the field spans 40-years and includes the Project Phoenix.

Director Jill Tarter believes based on the current evidence that we are currently in the early phase of discovery of extraterrestrial intelligence in the universe. Tarter was drawn into the field over 40-years ago by the work of Frank Drake an astronomer who created a mathematical equation which factored in a series of variables critical for life as we know it. He concluded that given his mathematical model there is a strong likelihood that somewhere in the cosmos there is life and we on Earth are not alone.

ATA's current capability is about 1,000 stars that can be viewed simultaneously. The next decade will allow researchers to view up to a million stars at once. According to Dr. Shostak the current Allan Telescope Array can capture millions of frequencies. Researchers work seven days per week in shifts covering 24-hours a day.

The radio frequency room houses advanced fiber optics and equipment which allows researchers to monitor 100-million channels with the capability to move up to an additional 100-million channels. According to Shostak, We know technology, by virtue of Moore's Law, will continue to increase exponentially and may within a decade make obsolete the capacity of the massive Allen Telescope Array.

Since the inception of the radio over 100-years ago, Earth has been leaking radio frequencies upward into the universe light years away. The scope, speed and range of ATA and yet to be developed technologies can boost Earth's capacity way beyond this infant stage. The new technologies are referred to as a SITI hot rod with the ability to view millions of stars simultaneously mega-light years away from Earth.

No government funding for SETI!

UFOs and foreign invasions [Earthly kind]
Posted by Mercury at 6:51 AM