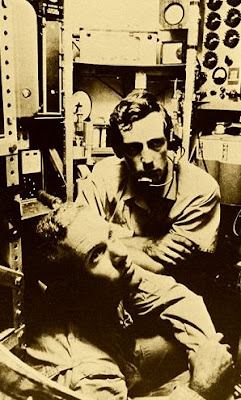 Jacques Piccard
July 28th 1922 to November 1st 2008
What a family of adventurers and scientists. His father Auguste Piccard was a physicist and did work in ballooning. His son Bertrand achieved fame as a round-the-world balloonist. "The Piccard family has the unique distinction of having made both the highest flight and the deepest dive of all time." As a trivia note the captain of the fictional Star Trek: Next Generation Jean-Luc Picard was named from "...one or both of the twin brothers Auguste and Jean Felix Piccard..." by Gene Roddenberry the creator of Star Trek.

"Jacques Piccard, Scientist Who Explored the Deep Seas, Dies at 86"

The New York Times
Jacques Piccard, a scientist and underwater explorer who plunged deeper beneath the ocean than any other man, died Saturday, his son’s company said. He was 86.

Mr. Piccard died at his Lake Geneva home in Switzerland, according to the company, Solar Impulse.

Jacques Piccard helped his father invent the bathyscaphe, a vessel that allows people to descend to great depths. On Jan. 23, 1960, he and Lt. Don Walsh of the United States Navy took the vessel, named the Trieste, into the Mariana Trench in the Pacific to a depth of 35,800 feet, nearly seven miles below sea level. It remains the deepest human dive ever.

"By far the most interesting find was the fish that came floating by our porthole," Mr. Piccard said. "We were astounded to find higher marine life forms down there at all."

Solar Impulse said the discovery of living organisms at such a depth played a crucial role in the prohibition of nuclear waste dumping in ocean trenches.

After the dive, Mr. Piccard continued to research the deep seas and worked for NASA.

He also built four mid-depth submarines, mesoscaphes, including the first tourist submarine. During the Swiss National Exhibition in 1964, he took 33,000 passengers into the depths of Lake Geneva.

Born in Brussels in 1922, Mr. Piccard was 9 when his father took his balloon into the stratosphere. He studied in Switzerland and worked as a university economics teacher, but abandoned teaching to help his father design the bathyscaphe.

Information about his survivors was not immediately available.

In April 1999, when Bertrand Piccard completed a round-the-world balloon trip with a Briton, Brian Jones, his team drew on Jacques’s experiences in the Gulf Stream to work out how best to use the jet stream to speed the balloon around the world.

They also made use of some of the ideas used by Auguste Piccard in his pioneering flights, including the notion of only partly inflating the balloon at takeoff to allow for the expansion of the gases at higher altitudes, and the use of an airtight capsule.

In a statement on Saturday, Bertrand Piccard said his father "passed on to me a sense of curiosity, a desire to mistrust dogmas and common assumptions, a belief in free will, and confidence in the face of the unknown."
Posted by Mercury at 4:03 AM