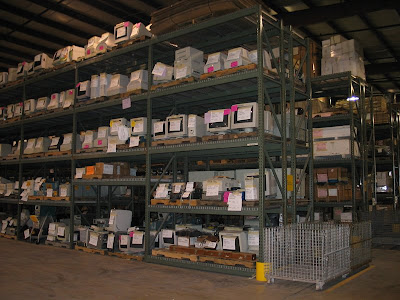 Discarded goods have a home...maybe to be recycled and used again. Nerd's heaven?

The Fermilab boneyard is no burial ground; it’s a place where unwanted parts find new homes and lives. They're matched with scientists who can put them to good use, donated to local schools and parks, or sold for recycling.

Symmetry
Hidden from view by old willow trees, the cast-off tools of high-energy physics are strewn across 11 acres: rejected cables, tables with missing limbs, and computers that couldn't keep pace. Swallows nest in rusty magnet frames, raccoons pillage through buckets of bolts, and coyote pups hide from the wind under a metal plate painted with the American flag.

Many laboratories and universities lack the space to store old equipment and scrap, so Fermi National Accelerator Laboratory takes it in. "I just hate to see stuff get melted down when it doesn’t have to be," Todd Wagner says. "Sooner or later, somebody is going to come out here and need it. There’s enough talent at this lab here that we can find a use for anything."

Wagner oversees the Fermilab boneyard—a recycling center for experimental components that might otherwise end up in a landfill. Scientists adapt these pieces for other experiments—some for short terms, others permanently. Sometimes, to his dismay, Wagner can't find a good home for a part and must recycle it for a new life in consumer goods.

"The name of the yard—boneyard—is misleading," Wagner says. "You hear 'bone' in the title and you think it's where stuff comes to die. I like to think the opposite—that it’s where items get reborn."

The goods on display range from giant copper coils and van-sized chunks of particle detectors to small pieces of equipment Wagner rescues by hand during his weekly tour of the lab. Back at the yard, he sorts scraps into bins of copper, aluminum, brass, steel, and iron. Discards from other US laboratories— and even from foreign countries—come in by rail.

Before setting aside materials to sell to private industry, Wagner checks to make sure they are free of radioactive contamination caused by the particle beam. "Everything gets surveyed twice so there's no chance of any activity," he says, sweeping the wand of a Geiger counter over a piece of metal.

Once he knows what he has, he can match a displaced item with a scientist or contractor who needs it. "They’ll say, 'Do you have any steel drums?' or 'Do you have a rivet so-and-so size?' and I’ll go and get it for them," Wagner says.

Sometimes scientists want to pick their own parts.

Other discards find new lives outside of physics, where old sections of tunnel become tornado shelters and steel scaffolding has been crafted into a staircase. Parking medians in a local park used to be wooden power poles, designed by Fermilab's founding director Robert Wilson in the shape of the Greek letter π.

Walking through the boneyard provides a glimpse into the evolution of particle physics. There are bins of circuit boards pushed aside by smaller, faster models and a 61-year-old synchrocyclotron magnet that might never turn on again. The magnet, conceived by Enrico Fermi following his work on the Manhattan Project, once drew crowds to its former home at the University of Chicago. In the early 1950s it pushed particles to the highest energy in the world, 450 MeV. Now a flower sprouts at its base, looking as out of place as a mouse at the foot of an elephant.

"That magnet got a lot of use," Wagner says. "I bet it could get even more at an art museum."

What Fermilab can't reuse or donate to local schools and parks is sold to scrap contractors, raising more than $1.5 million since 2001.

Fermilab also collects and sells about 200,000 pounds of electronic waste each year, including discards from nearby Argonne National Laboratory. This earned the lab a US Department of Energy environmental award in 2006.

"Some of this scrap will become a toy or a car part," Wagner says. "If it came back, I wouldn’t recognize it."

As Wagner walks through the yard, he tidies up random pieces of cable blown by the wind. "It all counts," he says, tossing the cable into a giant bin. "It doesn't go to a landfill. That’s the good thing."
Posted by Mercury at 5:21 PM