Fermilab vs CERN--clash of atomic titans 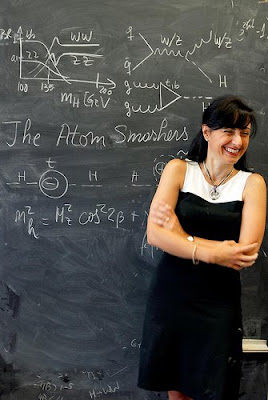 PBS's Independent Lens on Tuesday November 25th will offer a film on Fermilab's competition with the LHC to discover the Higgs boson particle.

This research showdown will premier at the world’s largest science celebration, Science Chicago.

The 75-minute film Atom Smashers will air Sept. 19 and 21 at the Chicago Museum of Science and Industry with a panel session following the initial screening. Eight Fermilab scientists play key roles while other employees appear occasionally in shots.

Following its Chicago debut, the film will head to several international cities and hit the air ways with a 53-minute version on PBS’s Independent Lens Nov. 25.

Co-director Monica Ross, an adjunct professor at Columbia College in Chicago, said the film doesn’t follow the traditional NOVA-like format of scientist interviews. Instead, the crew followed the lives of scientists working and trying to relax amidst the pressures of dealing with budget cuts, aging machinery, and the threat of watching the prize from a more than decade long search be ripped out of their grasp by the new experiment on the block: the Large Hadron Collider at CERN.

"There is enough physics there for the people that are interested to find out what the Higgs boson is and how the Tevatron works," says co-director Clayton Brown, a lecturer at Northwestern University. "But for those people who say, 'I flunked high school physics' there is enough character building, politics and culture to engage them."

In between long hours analyzing data and fixing four-story detectors, you see physicists engaging in athletic and musical hobbies and struggling with questions about how to balance a career and family.

While the larger story of the film draws on the quest for scientific discovery and America’s turbulent relationship with science funding, the characters demonstrate the similarities among the passionate in all careers.

"I think most people don’t tend to associate the words passion and obsession with physicists or scientists in general," Brown says. "They think of them as very dry. It has been really great to show the rest of the world that physicists are just as passionate or obsessed about what they are working on as musicians or poets."

The Chicago-based 137films acquired 110 hours of interviews during 3½ years of filming at Fermilab, in Washington DC, London, and New York. Footage of CERN was borrowed from a director working on a documentary there. The film has received international attention from several film and science festivals.

Although none of the crew has a scientific background, they say they are fascinated by science's ability to explain "who we are, what we do, and why we are here."

The documentary poses questions for the public to consider.

"We hope viewers will come away from this asking themselves: Should we continue to do this type of work? And it looks like the dominance is shifting overseas, is that something we should be concerned about?," Brown says. "Those questions are too important for us to answer for the viewer."

Fermilab 'ghosts' hint at new particles
Posted by Mercury at 7:08 AM